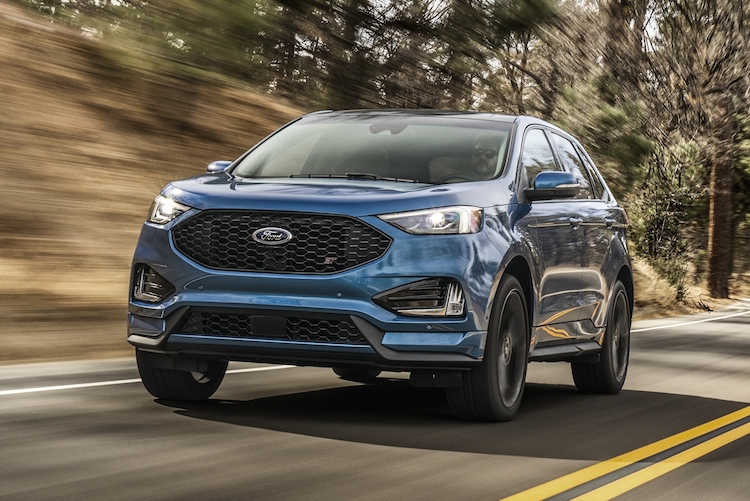 The Ford Edge is a midsize, two-row utility vehicle, one of the earliest models in what was once a segment dominated by three-row models. The 2020 Edge is part of the second-generation line introduced for the 2015 model year. This year, dual-zone climate control is now standard. Also, the audio system no longer includes a CD player.

The Edge sits between the compact Escape and the three-row Explorer in Ford’s utility vehicle lineup.

Highlights of the 2020 Edge

Mainstream to premium to performance. The Ford Edge comes in SE, SEL, Titanium, and ST trims. The base model aligns with what you’d expect in this segment, with soft-touch materials, brightwork trim, and cloth seats included. Move up the Titanium trim and Ford upgrades the appearance, by including real chrome, leather-trimmed seats, and upgraded technologies. The ST model is the performance leader and reflects that look with special ST embroidery and other demarcations.

Room for five with ample storage. Front or back, the Ford Edge offers generous passenger space with room for five. There is no penalty seat in the house, although the passenger sitting in the middle position on the rear bench seat might argue otherwise. In any case, there is enough room to stretch and move about. The Edge supplies 39.2 cubic feet of standard storage space and 73.4 cubic feet with the rear seat folded.

Two strong engine choices. Ford supplies the Edge with a standard 2.0-liter turbocharged four-cylinder engine with 245 horsepower and 275 pound-feet of torque. Power routes to the front or to all four wheels by means of an 8-speed automatic transmission. Customers will also find a 2.7-liter turbocharged V6 engine, which is exclusive to the ST, an all-wheel-drive model. This one throws down 335 horsepower and 380 pound-feet of torque and works with an 8-speed transmission.

Infotainment done right. Ford knocked it out of the park with the Edge’s infotainment system. Every model comes with its highly useful SYNC 3 system which seems lightyears ahead of everything before it. This voice-controlled system is bundled with Apple CarPlay and Android Auto smartphone compatibility, Bluetooth, six speakers, two USB ports, and a Wi-Fi hotspot. Among the upgrades, you’ll find a 115-volt power outlet, wireless device charging, and 9- and 12-speaker audio packages.

Average towing, at best. If you’re looking to tow, a properly equipped Edge will pull 1,500 pounds with the base engine. That’s certainly not outstanding. Choose the V6 model and it can pull up to 3,500 pounds, which should suffice for many owners. But if you require more robust towing capabilities, you may want to turn to the three-row Explorer as this model pulls from 3,000 to 5,600 pounds, depending on how it is equipped.

The Ford Edge holds its own, thanks to handsome styling, two strong engine choices, varying trim levels, and utility. Prices can move well above $40,000 when well equipped, which pushes it into luxury territory, but without the brand cache. Fortunately, Ford discounting is typically very generous, with strong savings available whether you pay cash, finance or lease.