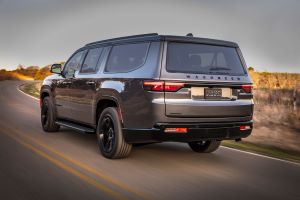 One year removed from its reintroduction, the Jeep Wagoneer and upscale Jeep Grand Wagoneer are ready for important changes. Two, in fact. The first change brings in stretched wheelbase “L” variants. The second change welcomes the all-new Stellantis inline-six-cylinder engine. Combined, Jeep seeks an edge in a niche, but a profitable segment.

Jeep introduced the updated Wagoneer and Grand Wagoneer models at the 2022 North American International Auto Show. Held at the Jacob K. Javits Convention Center in Manhattan, this auto show is back after a two-year pandemic reprieve.

Stellantis, the parent company of Jeep, Chrysler, Ram, and Dodge, also showcased the Chrysler Airflow concept. But our attention is on all matters of Jeep, so please read on.

Jeep introduced the Wagoneer series in 2022, putting this SUV in a market occupied by the Chevrolet Tahoe and Suburban, GMC Denali and Denali XL, and the Ford Expedition and Expedition Max. As for the Grand Wagoneer, it comes dressed in luxury threads, therefore it targets the Cadillac Escalade and Lincoln Navigator.

For 2023, Jeep includes a pair of “L” or elongated wheelbase models. Here, Jeep adds 7 inches between the wheels and 12 inches overall. With this change, Jeep claims best in class third-row room as well as standard cargo space. In either standard or extended wheelbase form, the Wagoneer series holds seven or eight passengers.

Currently, the Wagoneers are powered either by a 3.6-liter V6 or a 5.7-liter V8 engine. Both engines will move to the side to allow a 3.0-liter twin-turbocharged six-cylinder engine to take over.

In the Wagoneer, the engine is tuned to deliver 420 horsepower and 468 pound-feet of torque. In the Grand Wagoneer, Jeep amplifies the power quotient to a whopping 510 horsepower and 500 pound-feet of torque. Power routes to the rear or all four wheels utilizing an 8-speed automatic transmission. Jeep claims that the more powerful engine will have a 1 to 2 mpg edge over the current engines.

Jeep also announced that the new engine will be made available on a limited basis in 2022 models. Dubbed, “Hurricane,” customers should notify their dealers that they want it. We are not certain if vehicles already ordered will be eligible for the change. Reach out to your dealer to learn more.

For 2023, the Jeep Wagoneer Carbide rolls out. This model welcomes blacked-out touches, which have become common in many vehicles over the past few years.

The Carbide treatment extends to the cabin as well. Inside, these trims receive a new technical hydrographic dash trim. Also, a black headliner, smoke-accent embroidery, and black touches on the seats, instrument panel, and doors complete the look.

Like the engine, the Carbide package makes an early debut with the 2022 Wagoneer right now.

For 2023, the appearance package will be available on all 2023 Wagoneer and Wagoneer L models sometime after July 1.

To accommodate the extended-wheelbase models, Jeep made some changes worth noting. In each case the company used “new ” and that is a fair explanation of what is different about the “L” models.

We see the combination of an extended wheelbase Wagoneer Series and the new engine bringing benefits to the product line. The Wagoneer has established itself in a niche segment. The changes are certain to make a stronger case against its rivals. That’s a win for consumers who have more choices.