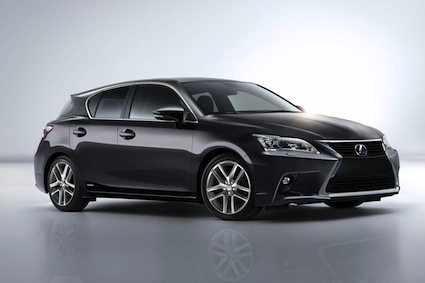 Lexus does not offer diesel engines in the US, instead it follows a hybrid strategy to provides a family of five fuel efficient models ranging from its base CT Hybrid up to its $120,060 LS Hybrid.

The CT Hybrid (CT 200h) five-door hatchback has received a freshened look for 2014 and now offers complimentary HD Radio Real Time Traffic and Weather. Importantly, its base price remains unchanged at $32,050 or $32,960 with destination included. The 2014 Lexus CT 200h goes on sale in late Jan. to early Feb. 2014.

Inside, the CT 200h receives Lexus’ all-new multimedia system with HD Radio. Its a fixed and thinner screen than the outgoing model to provide a more contemporary look. The Lexus hybrid’s navigation system is optional and now includes an updated Remote Touch Interface. A new speaker design is standard with both the six- and 10-speaker audio system packages. The previously optional sliding sun visors and a leather shift knob, redesigned for 2014, are now standard equipment. Bluetooth 3.0 and dual USB are introduced for 2014.

The changes to the 2014 Lexus CT 200h also extend to the model’s F SPORT edition including newly designed 17-inch 5-twin spoke alloy wheels with two-tone graphite and machine finish. A mesh grille is part of the package, matching the design used in other F SPORT models. A new black contrast roof along with a new rear spoiler with two large air ducts, mesh fog lamp inserts and black surround are also included. The F SPORT features unique exterior badging and provides a pair of finishes not available elsewhere with the CT Hybrid: Ultra White and Ultra Sonic Blue Mica.

The Lexus CT 200h hybrid is powered by a 98-horsepower 1.8-liter four cylinder engine and two electric generators including one that drives the front wheels and makes 80 horsepower. Lexus utilizes an electronically controlled continuously variable transmission and equips the CT 200h with a sealed nickel metal hydride battery pack.

Lexus estimates that the CT 200h will be rated at 43 mpg in the city and 40 mpg on the highway. Those numbers are probably much better than any diesel could offer, underscoring that Lexus’ hybrid strategy is a successful one.

Top 5 Most Efficient Hybrid Vehicles of 2012