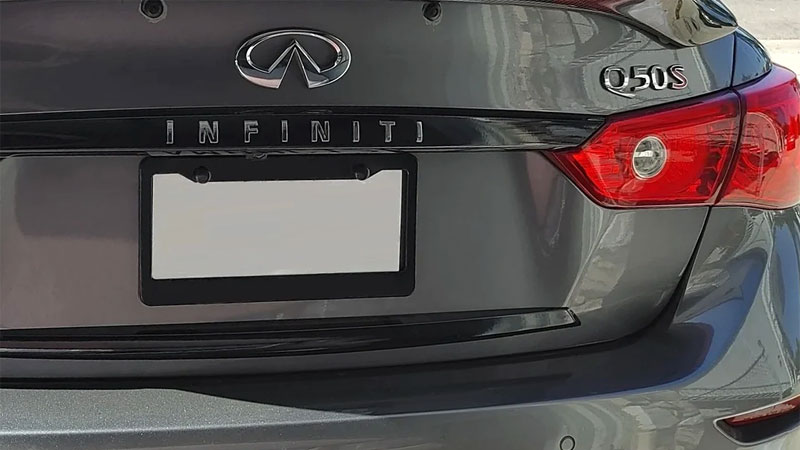 One recent example was the name change for the Ford Five Hundred, renamed the Ford Taurus after a few years to keep the Taurus name alive. Infiniti, Nissan’s luxury brand, is about to embark on a naming convention change that won’t affect just one model, rather it will roll out across its entire line up.

Those changes kick in with the 2014 model year and Auto Trends has been tracking the reworked names with much help from Infiniti.

Infiniti announced its new naming convention in Dec. 2012, offering several reasons for the update. For one, it is now a global brand, having spread far beyond its chief markets in Japan and North America, selling its products in more than 50 markets.

New buyers are not beholden to Infiniti’s current naming convention, something that the brand finds restrictive.

For instance, Infiniti has been using one or two letters followed by two numbers for each model. The letters represent the vehicle line, the numbers the engine size. The numbering, however, presents a problem as future engine sizes are likely to come in smaller.

Thus, the Infiniti M56 might someday find its largest engine coming in at 4.3 liters, thus the correct name for the sedan would be the M43. The smaller number could suggest “less” in the eyes of its customers, when Infiniti simply wants to convey its most recent and advanced products regardless of engine size. 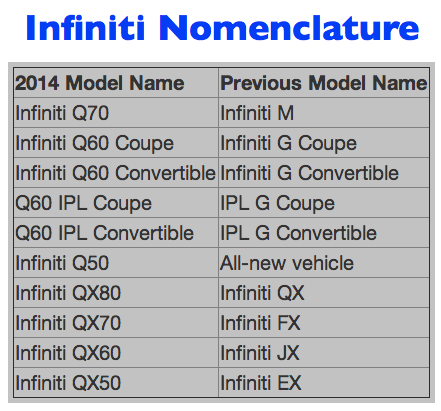 The first renamed Infiniti out of the gate is the Infiniti Q50. This model replaces the Infiniti G Line’s sedan and is itself an all-new vehicle for the 2014 model year. It is a compact sedan that competes with the Cadillac ATS, BMW 3-Series and with the Lexus IS, among others, and will be powered by Infiniti’s familiar 3.7-liter V-6 engine.

The renaming parade continues apace with the Infiniti M Line renamed the Infiniti Q70. Last week, this writer completed his review of the 2013 Infiniti M56, purposefully leaving out the pending change.

Often it is enough to concentrate on the model at hand instead of bringing in a new model or a name change that won’t yet have an impact on consumer’s buying decisions.

Infiniti’s four crossovers and SUVs will assume new names beginning in 2014 too. The Infiniti EX becomes the QX50, the JX is renamed the QX60, the FX is the QX70 and the QX is the QX80.

Yes, count on some confusion when people talk about like sounding models such as the Q50 and QX50. Just remember that when the second letter is present, the model being discussed is a crossover or an SUV.

Notably, Infiniti has started out its model renaming from 50 on up. That may not mean much of anything other than perhaps to give it room to slot in smaller models, if needed. On the other end of the spectrum, there isn’t much room to go up unless Infiniti decides one day to crack the 100 threshold.

That seems unlikely, but then who would have thought that any new nomenclature would be introduced?

One thing customers won’t have to be concerned about is subsequent number changing as new generation models roll out. For instance, when the next generation Infiniti Q70 (Infiniti M) is introduced, it won’t be called the Q71.

Instead, it will retain its name indefinitely unless Infiniti does the unthinkable and rolls back its nomenclature. Let’s hope not.

See Also – On the Road With the Roomy, Stylish Infiniti JX35