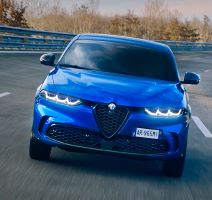 Seven years is a long time between new models for an automotive brand. Then again, we are talking about Alfa Romeo, a niche Italian make from Fiat that is now under the auspices of Stellantis.

The 2023 Alfa Romeo Tonale compact crossover is the first new model since the midsize Stelvio crossover launched in 2016. Together, the two models should better position the marque to battle BMW, Mercedes-Benz, Volvo, and others in a hot segment.

Tonale is the name of a mountain pass in Italy, the same as the Stelvio. The vehicle was initially paraded in concept form at the 2019 Geneva Auto Show, therefore it has been a long time coming. The Tonale sits on the Fiat Chrysler (FCA) Small Wide platform, the same architecture underpinning the Jeep Renegade and the Jeep Compass.

Alfa Romeo will build the 2023 Tonale at Stellantis’ Pomigliano, Italy manufacturing plant this Spring. Sales will commence in June.

Taking on the Competition

In the crosshairs of the Tonale are several small utility vehicles offered by key competitors. Indeed, the BMW X1 is the target model and like this German crossover, the Tonale will be available in gas, diesel, and plug-in hybrid electric vehicle formats. Moreover, the Tonale will offer a 48-volt hybrid powertrain that’s designed for traveling short distances on electricity only.

The U.S. market won’t be able to order the Tonale until the fourth quarter with deliveries beginning in early 2023. For the American market, the Tonale will have a 2.0-liter turbocharged four-cylinder engine, a nine-speed automatic transmission, and standard all-wheel drive. The engine produces 256 horsepower and 295 pound-feet of torque. We do not have the 0-60 mph times yet, but you can be assured that this crossover will be plenty fast.

Stellantis says the plug-in hybrid will have a 1.3-liter turbocharged four-cylinder engine with an output of 177 horsepower with a combined 272 horsepower along with a 100-kilowatt electric motor rotating the rear axle. Its electric-only range will top 30 miles. A six-speed automatic transmission sends power to the front wheels.

In its news conference introducing the Tonale, Alfa Romeo was quick to point out that the new model shares the Jeep’s unibody construction only, but has unique floor panels and a dedicated interior. Such an arrangement isn’t unusual in this industry where Toyota and Lexus as well Nissan and Infiniti, and Honda and Acura share the platform love. Indeed, as the Stellantis entity strengthens, we are likely to see robust platform-sharing across the 14 brands moving forward.

Alfa Romeo also announced that the Tonale would include its all-new non-fungible token (NFT) technology. The marque is the first automotive producer to offer it, which can link a car with an NFT digital certificate.

Based on the “blockchain card” idea, the private and non-modifiable history of the main stages in the life of an individual vehicle is tracked. With the owner’s consent, the NFT records vehicle data, producing a certificate. That certificate can demonstrate that the Tonale has been accurately maintained, resulting in a constructive influence on its remaining value.

For instance, on the pre-owned car market, the NFT certification signifies an added source of trustworthiness for owners or dealers to expect. Meanwhile, buyers will be comforted in their selection of a vehicle.

Alfa Romeo will equip the Tonale with Uconnect 5, Stellantis’ cutting-edge in-car technology. This software is prized for its rapid operating speeds, fresh content, and enhanced customization. The system offers various connected and convenience features, which enable drivers to keep their eyes on the road. Further, the new infotainment system features multiple fully customizable interfaces. It stores up to five different user profiles and features preferences for music and vehicle operation.

We will have more details about the U.S.-spec Tonale nearer to its release date. We do know that wireless Apple CarPlay and wireless Android Auto are on tap. A selection of audio packages seems likely and we expect the Tonale will offer a full suite of driver-assist technologies.

All in all, the Tonale should help put Alfa Romeo back on the map. Crossovers fuel sales and the Tonale can only help.