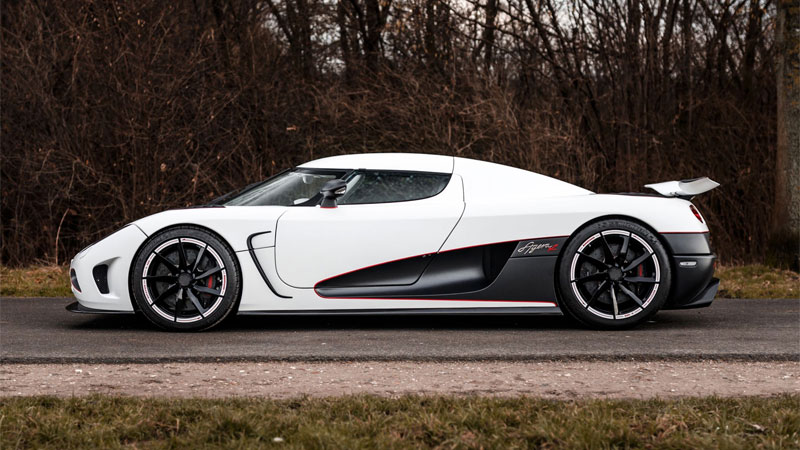 Koenigsegg is the fastest Swede on earth.

The Swedish car industry isn’t really Swedish anymore, with major players Saab and Volvo now owned by companies abroad. However, one manufacturer remains a true Swedish brand, with the hardest name to spell, ever.

Koenigsegg, the exotic car manufacturer, has been around for over 10 years now, building cars that begin with “CC” and end with a different letter, number or both. For example, there was the CC8, CCX, CCGT, and CCXR.

Now, finally, Koenigsegg has given a car a real name, and it’s not even that hard to spell or pronounce. It’s just really fast and costs about $3 million.

The Agera continues the Koenigsegg tradition of very fast and flashy hyper cars. It looks very similar to the previous Koenigsegg models, but a side-by-side view shows several new and improved details on the Agera.

The front is a bit wider and features slightly different headlights. The rear also gets a redesign, with new tail lights. Other than a few other cosmetic tweaks, the overall shape remains pretty much the same.

Koenigsegg develops its own engines, quite uncommon for a boutique supercar maker. The Agera engine makes a very high 940 horsepower and nearly 750 foot-pounds of torque. All-aluminum and displaced at 5.0-liters, the engine also features two turbochargers and dry sump lubrication.

Total weight of the engine is only 434 pounds thanks to a carbon fiber intake manifold and the aluminum construction. The car weighs 2932 pounds; the lightweight body and high power result in 0-60 times in less than 3 seconds.

The traction control system offers five different modes, with only the most skilled drivers venturing into the less restrictive ones. The transmission is a 7-speed dual clutch with paddle shifters. It is the first dual clutch transmission to feature only one input shaft.

The second clutch slows down the input shaft during up shifts in order to reduce the time it takes to synchronize the next gear, resulting in faster shift times. Most notably, the transmission weighs only 178 pounds.

Tasked with stopping a car with a 245 mph top speed are the six piston front and four piston rear calipers along with huge carbon ceramic rotors. These bring the car from 62 mph to a full stop in just 100 feet.

The chassis is based around a carbon fiber tub, the current standard among super cars. It also features gas-hydraulic shocks in the suspension along with wishbone setup in all four corners.

While the Agera competes with the Bugatti Veyron and Pagani Huayra at the pinnacle of the hyper car market, Koenigsegg recently unveiled an even faster version, simply called the Agera R. The Agera R runs on ethanol and can generate 1,115 horsepower and 885 foot-pounds of torque on E85 or E100 ethanol.

It can also run on gasoline as well, however, since ethanol offers a higher octane than gasoline, power on gas is limited to 940 horsepower. The top speed of the Agera R is nearly 260 mph.

The Agera R features a brand new rear suspension design called Triplex. This system connects the right and left rear wheel with a spring and shock absorber, allowing these to influence each other for superior handling benefits.

Koenigsegg briefly held the title of world’s fastest production car, just before the Bugatti Veyron hit the streets. While the Veyron Super Sport still has the edge with a 267 mph run, Koenigsegg is creeping up on the almighty Veyron: it may get very interesting soon.