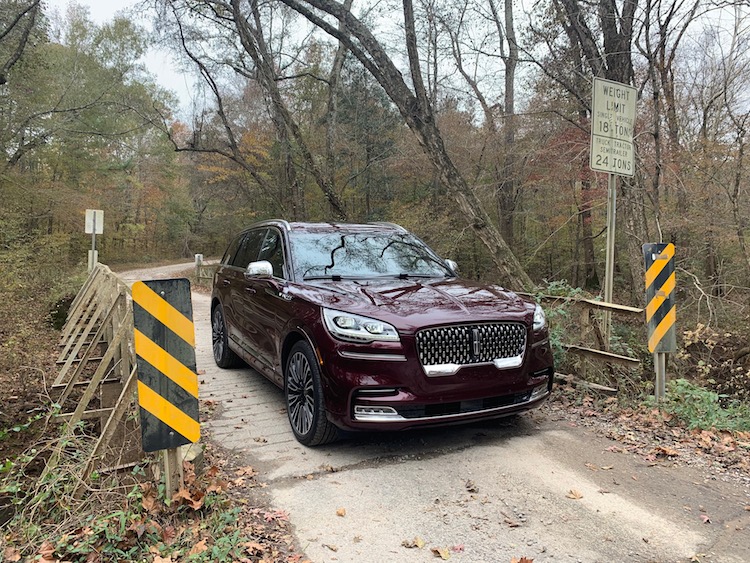 The Lincoln marque is once again undergoing a major overhaul, this time with new utility vehicle-based models. Ford’s luxury brand is also moving away from its three-letter naming convention, choosing traditional and new names featuring nautical and aviation themes.

Suggesting movement, the current nomenclature now covers all four SUVs — Navigator, Aviator, Nautilus, and Corsair. Separately, a pair of sedans remain — the large Continental along with the midsize MKZ. We think the latter is in its final year as the similar Ford Fusion is also being discontinued.

With a heavy utility vehicle focus, the Lincoln Motor Company (as identified by Ford) is all-in on the kinds of models customers want. Although its current roster shares its underpinnings with like Ford models, attention to detail, engineering, and luxury appointments have improved tremendously and supply further separation.

For 2020, the Lincoln Aviator debuts, a name familiar to fans. From 2003 to 2005, Lincoln offered an Aviator which was based on the Explorer. Once again, the two models share a common platform, but this time the Lincoln features a distinct exterior design and interior layout.

Our top-trim test model costs just over $91,000. Yes, it is possible to have more than $40,000 worth of upgrades for Lincoln’s second most expensive model. As for its large Navigator, it is the price leader with a fully optioned model approaching $103,000.

The new Aviator is approximately 90 percent of the size of the stretch Navigator. Its design roughly parallels the Navigator, a look we like. However, there are some differences, including in the chrome grille surround design. The Aviator’s design is stately, featuring a bold front fascia, strong shoulders, upright pillars, and crisp lines.

Among the standard features are full-LED lights all around, a power liftgate, and a quad-tip exhaust system. Lincoln dresses the Aviator with stylish 20-inch wheels.

Lincoln went to great pains to ensure the Aviator has the features needed to take on its competitors. There is ample room for five across the first two rows with the third-row seat best assigned for carrying two children.

The cabin has a luxurious feel with even the standard models dressed in imitation leather. A tilt-and-telescopic steering column, push-button start, power controlled and heated front seats, a power-folding third-row seat, and three-zone climate control chart the list of included features.

Where the Aviator truly struts its stuff is with the Black Label trims. Here, Lincoln offers three design themes — flight, destination, and chalet. Each one offers unique color schemes, wood trim, and patterning. That said, you don’t have to opt for the top-trim to get loads of amenities. Indeed, beginning with the Reserve trim, Lincoln adds such features as a power tilt-and-telescopic steering column, leather-trimmed seats, and four-zone climate control. This trim also features second-row captain’s chairs, ambient lighting, and a second-row mini console. 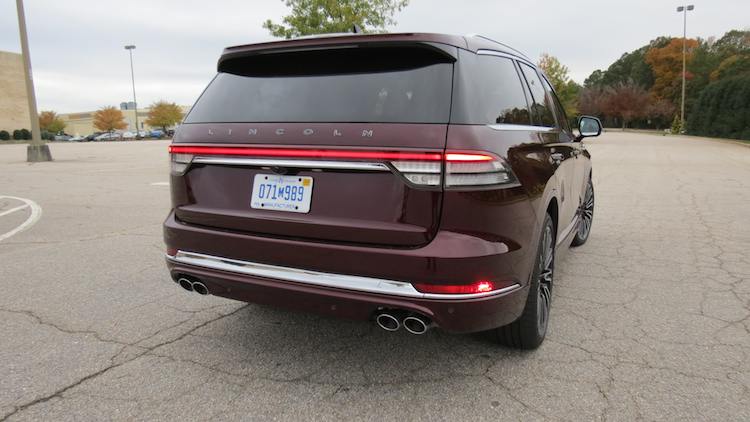 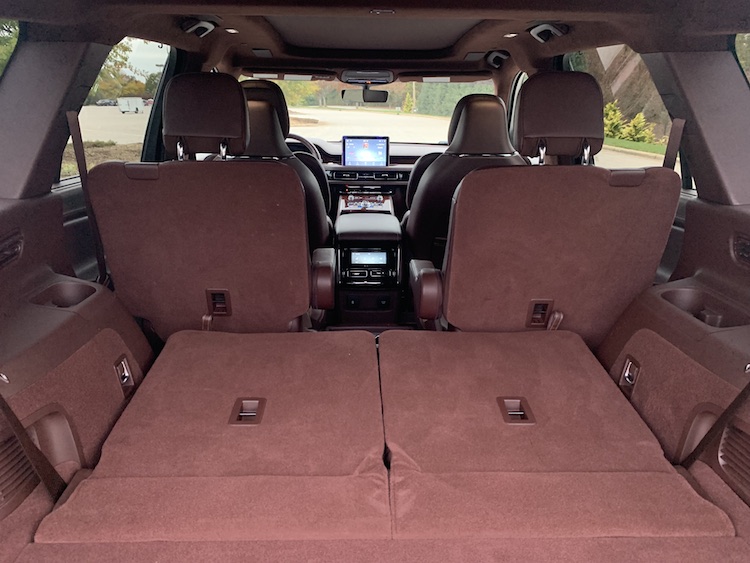 The third-row seats are power-operated across all trims.

Straight out of the gate Lincoln supplies the 2020 Aviator with laudable tech features, including a 12.3-inch configurable instrument cluster, a 10.1-inch touch-screen display (that sits like a laptop screen on top of the center stack), a Wi-Fi hotspot, Android Auto and Apple CarPlay smartphone compatibility, USB ports, and a 10-speaker audio system.

Among the upgrades is a fantastic 28-speaker Revel audio system (a 14-speaker system is also available), navigation, and a rear entertainment system. A wireless charging pad is optional.

Every Aviator model is powered by a 3.0-liter twin-turbocharged V6 engine with 400 horsepower and 415 pound-feet of torque. A 10-speed automatic transmission shuttles power to the wheels. This model earns an EPA-estimated 18 mpg in the city, 26 mpg on the highway for a combined 21 mpg. With all-wheel drive, the ratings are 17/24/20 mpg city/highway/combined.

The hybrid version utilizes the same engine and adds a battery-powered electric motor. Thus, the hybrid isn’t just more efficient than the base model, but it delivers more power — a jaw-dropping 494 horsepower and 630 pound-feet of torque.

Full power is always at the ready with the Aviator. Indeed, its step-off acceleration is strong and passing power is excellent. Under full throttle, the engine is loud, which may seem out of character for a luxury model. Additional sound-deadening materials might help here.

We’re thrilled that this Lincoln has standard rear-wheel drive as it seems better planted on the road, especially when navigating twisty pavement. The steering system is nicely weighted, while the ride benefits from air suspension on the upper trims. On all-wheel-drive models, up to half its power can shift to the front wheels, but not from side to side. The usual drive mode select dial manages gear shift points and steering weight.

The Lincoln’s strong engine means you won’t miss a V8, while enjoying a slight boost in fuel economy over what a larger engine might offer. As for towing, the Aviator pulls up to 6,700 pounds. Competing models include the Audi Q7, which pulls up to 7,700 pounds and the Mercedes-Benz GLE-Class and its 7,200-pound tow capacity.

The all-new Aviator serves notice that Lincoln is a serious competitor in the segment. On paper, we think it is a better vehicle than the Cadillac XT6, the model nearest in size to the Aviator. Lately, Lincoln seems to be doing a better job than its American rival in all things SUVs.

That said, we heard enough squeaks and rattles while driving the Aviator to be concerned. Further, there were some build quality issues reported early on, including a scrambled instrument panel, which is related to software problems dogging this model. If you’re interested in buying one, avoiding those built during the summer or early fall seems best. Sitting out a model year is an option for customers who still want one, but prefer Lincoln to work out the kinks. We think they will as Ford invested more than $1 billion in upgrading the Chicago Assembly Plant which builds the Explorer and Aviator.

Long term, we believe the Aviator is a promising model for Lincoln. The Reserve trim with all-wheel drive may offer the best bang for the buck, costing about $60,000 before several package options weigh in. This represents a strong price point for a three-row luxury SUV.