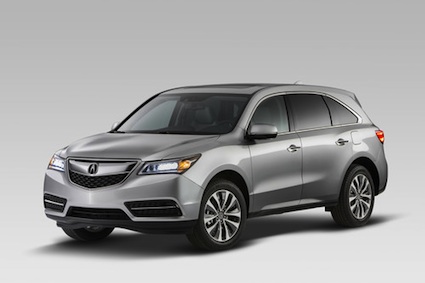 Stiff competition in the midsize luxury SUV segment notwithstanding, the Acura MDX has managed to carve out a healthy chunk of the market with more than 50,000 units sold in 2012. Its main competitors include the BMW X5, Lexus GX470, Volkswagen Touareg ad Volvo XC90, crossovers that will have to face off against an all-new Acura MDX later this year.

The New York International Auto Show was Acuras chosen venue to introduce the third generation MDX, a model that it says includes a more affordable and fuel-efficient two-wheel-drive configuration.

The2014 Acura MDX will sit on a new platform and makes use of lighter weight materials to lose 275 pounds. Magnesium, aluminum and high strength steel contributed to the weight savings and a 17 percent increase in aerodynamic efficiency has been realized. Noise canceling technology, acoustic glass and sound deadening materials help provide for a quieter cabin too.

Sold in front- and all-wheel drive variants, the Acura MDX is powered by a 24-valve 3.5-liter V-6 engine that is paired with a sequential shift six-speed automatic transmission. Paddle shifters are included. The Earth Dreams Technology engine makes an estimated 290 horsepower and 267 foot-pounds of torque. For its gasoline engines, Earth Dreams represents enhancements in variable valve timing and lift electronic control system, modifications that improve performance and fuel efficiency.

Top fuel economy ratings of 20 mpg around town and 28 mpg on the highway are projected for the front-wheel-drive model. The AWD Acura MDX is expected to deliver 18 mpg in the city and 27 mpg on the highway. This model takes regular grade gasoline.

Acura says that it put the AWD MDX through the paces on the Nürburgring racing circuit, Germanys famous track frequented European sedans and coupes. Its efforts apparently paid off as the newest model lapped the Ring eight seconds faster than the previous model.

Inside, the Acura MDX provides a 10-way power adjustable and heated drivers seat and an 8-way power and heated passenger seat. Additional storage space has been freed up too as the new model offers an oversized front console that can hold a laptop case, two tablets or a purse. Remote engine start, premium leather trim, silver-plated highlights, accent lighting, second-row sunshades and climate-controlled seats are among the standard features found in the Acura MDX.

Cutting-edge technology, always a Honda strong suit is apparent inside, outside and all across the Acura MDX. Signature Acura Jewel Eye™ LED headlights are introduced, a look that is distinctive and eye-catching. Inside, an improved ELS Studio premium audio system and an updated AcuraLink™ connectivity system are offered, the latter offering three years of complimentary freeway traffic and surface street conditions. Its a cloud-based system, one that works with compatible web-enabled smartphones.

Acura says that the MDX is expected to achieve the highest possible safety ratings including the Insurance Institute for Highway Safety Top Safety Pick+ award. A 5-star NHTSA rating is likely too.

The 2014 Acura MDX will be built at Hondas Lincoln, Ala. operating plant, and will go on sale this summer. Pricing will be announced closer to this models release date.