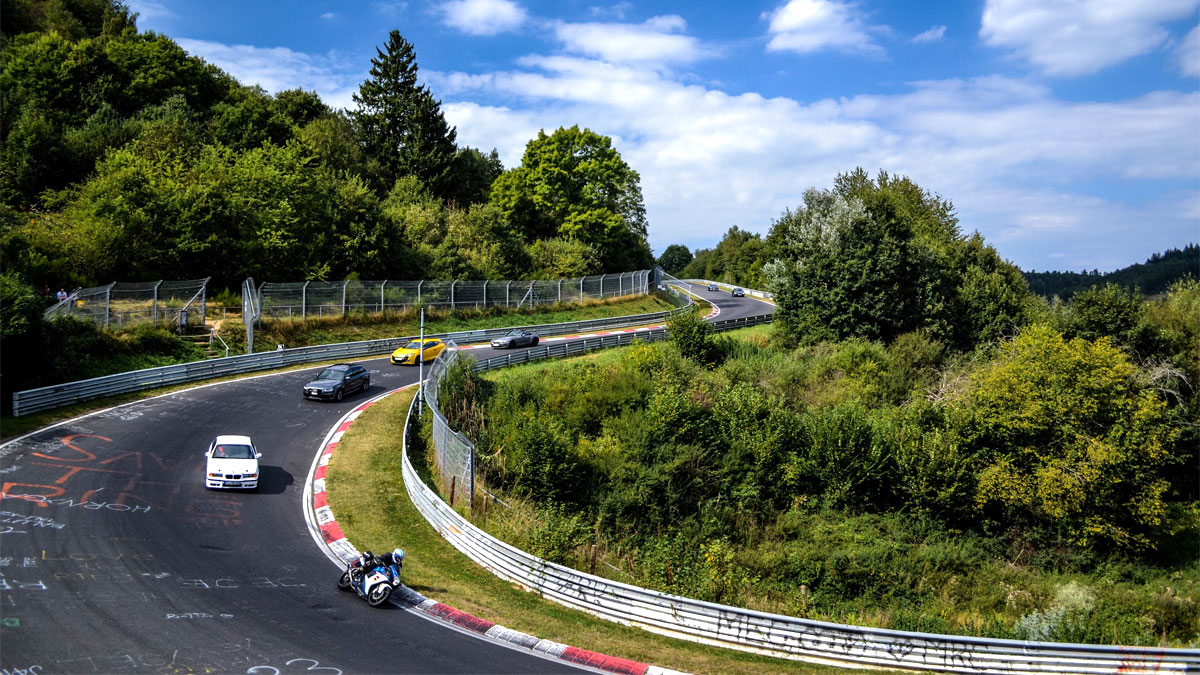 There has been a substantial craze around the internet when the Honda Civic Type R became the fastest front-wheel-drive car around the Nürburgring Nordschleife (aka “the Ring”). Many people were left wondering how an FWD hot hatch was able to outrun fast executive cars like the Aston Martin Vantage GT8 (1).

That record has been beaten by Renault, with their Renault Megane Trophy R.S, but the question is another. Why do these times matter so much, and why do manufacturers around the globe choose the Nordschleife as the “go-to” testing track?

Overview of the Nürburgring Nordschleife

Firstly, a bit of history. Back in 1922, a race called the Eifelrennen took place around the Eifel mountains in Germany. Many cities were crossed by the 20.5 miles long circuit, composed out of closed sections of the public road. The goal was to create a German rendition of the Targa Florio, an Italian endurance race.

This Eifelrannen consisted of 10 laps of this already long circuit, and it was apparent that the whole race is quite hazardous. Secondly, to fix this, the Nürburgring circuit was constructed in that area. It was built in the Nürburg city which happens to sit in the Eifel mountains, thus making the Eifelrannen race remain thematically correct.

Nürburgring is split mainly into two distinct loops, the Sudschleife and the Nordschleife. Until 1929, competitions were held on the entirety of the track which spans across 17.56 miles.

Back then, it was decided that all the future Grands Prix will only be held on the Nordschleife and that the smaller races and motorcycling events will be moved on the Sudschleife.

In the late 1940s, the Nordschleife became the main German Grand Prix track, also being in Formula One’s World Championship tracklist. Time attacks and the desire to push for the fastest time started here when the first Nordschleife lap under 9 minutes was completed.

In 1953 the 1000km Nürburgring race was introduced, a brutal endurance race, followed by the 24 Hours Nürburgring in 1970.

Over the years, cars started to become increasingly faster which made the already difficult Nordschleife life-threatening. After many crashes, a fatality, and hundreds of complaints, the Nordschleife was redesigned a bit. This was done by adding a few extra turns and removing some jumps making the track overall a bit slower.

However, there were still many issues. The emergence of television and how the F1 being the most important racing event worldwide meant that televising it would be difficult due to its length. The same length also resulted in a gigantic number of marshals and medical staff.

Even with such a large safety crew, many minutes could pass until they could arrive at a potential crash. This made the Nordschleife too dangerous and unsuitable for F1, and a new track was built in 1984, called the GP-Strecke, still used in the F1 line-up as of 2020 (2)(3). 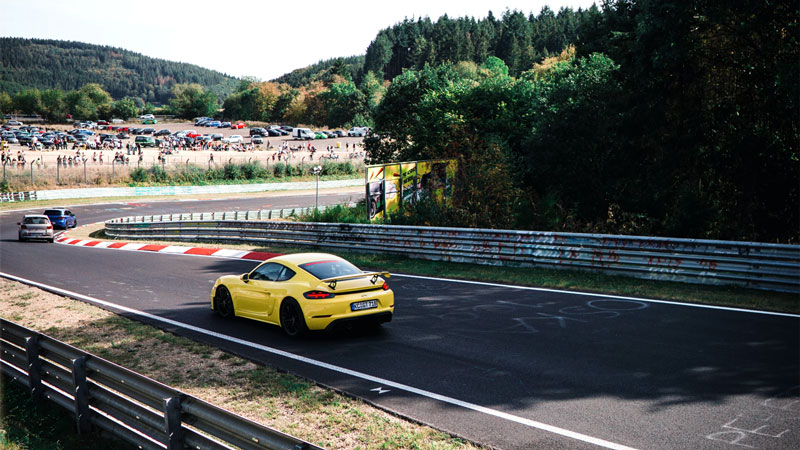 Nordschleife is one of the hardest racetracks in the world, both for the car as well as the driver. There are 73 corners on the current track and many straights, a maximum incline of 17-percent and a maximum slope of 11-percent, around 1,000 feet of elevation change, coupled with all kinds of paved road.

These create strong points of interest when real-life testing is concerned. As such, for 16 weeks a year, there’s a so-called “Industrie-Pool” where automotive manufacturers rent the track for testing and development.

There aren’t many places around the world where you can get such diverse factors. Fuel mixture is highly dependent on air pressure, and altitude changes that massively.

Race cars are even more sensitive to such a change, so a track that features a drastic elevation increase or decrease is a trait that automotive manufacturers must look out for. Turns which can be taken at speed, like a chicane, along with hairpins and almost square turns are paramount for a proper suspension setup, both for comfort and speed. 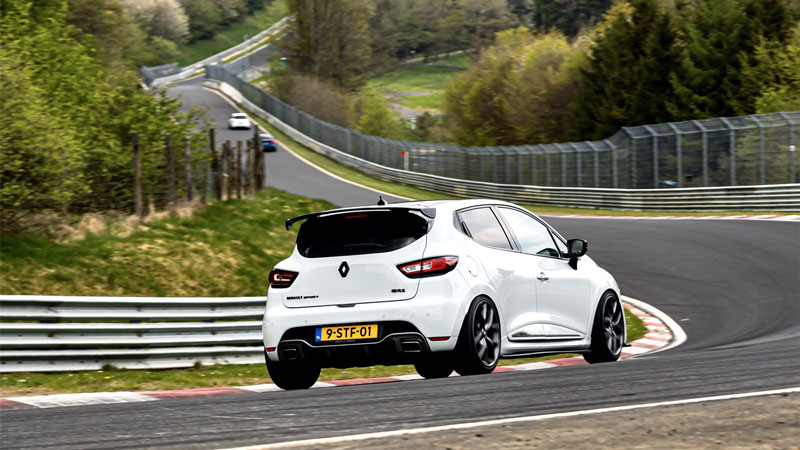 The rate of compression or rebound is a huge factor, same with the different wheel angles, like camber, toe, or caster. Many quick series of turns allow the manufacturers to test the car’s overall balance, giving them a method for testing snap oversteer, or chronic understeer.

A few kinds of pavement coupled with variable road inclination, both lateral and longitudinal, offer the engineers a way to test the tires’ performance and wear. A circuit aimed at speed must have plenty of turns that require the driver to slow down massively, testing the braking balance, performance, and even fade.

The Nordschleife is perfect to do all that. A straightaway between the Bridge and the Gantry can show engineers a potential top speed and the car’s aerodynamic stability at such speeds.

The Stefan Bellof’s Essess is a quick series of fast turns which makes the car’s balance, proneness to oversteer or understeer, and even braking performance apparent. The famous Carousel (Caracciola-Karussell) is a banked 210-degrees turn where the pavement is made out of concrete.

A simple mistake will result in the car getting effectively pushed out of the turn and thrown into the outside barrier. Over there, manufacturers can test if their suspension bottoms out under high loads, handling over rough surfaces, and accelerations out of a slow corner. 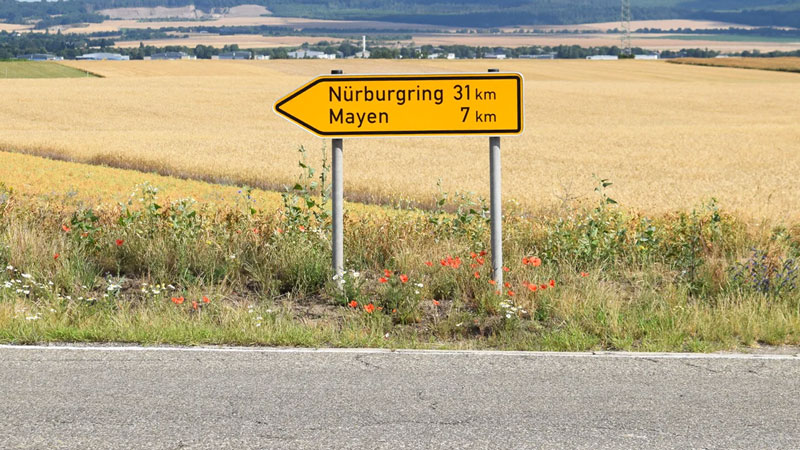 There are multiple tough corners on the Nordschleife, with no other racetrack in the entire world having such diversity with which the manufacturers can play.

A car outputting a quick lap time on the Nordschleife truly attests that it is indeed fast and not just straight-line fast. A competitive lap time around the Nordschleife is a real-life test of the car’s ultimate performance (4).

Also, getting an engineering crew and cars only to a singular test track is significantly cheaper than sending the same crew and cars to three test tracks to get the same variety of conditions.

See Also – One Fine Week With a Mercedes-AMG C43 Coupe