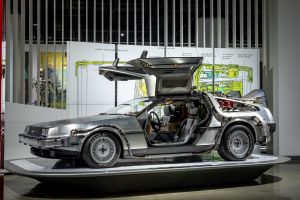 Think “Hollywood Icons” and names such as Greta Garbo, James Stewart, and Meryl Streep come to mind. But these decidedly human professionals have automotive counterparts or at least vehicles we recognize immediately. And even if we do not recall their precise names, they are just as unforgettable.

The world-renowned Petersen Automotive Museum in Los Angeles, located just down the street from Hollywood’s front doors, is a fitting place to showcase automotive starlets. The Omaze Hollywood Gallery on the Otis Booth History Floor is where vehicles featured in films over the past century are on display, part of a new exhibit at the museum.

The new display serves as an installment of the prominent “Hollywood Dream Machines: Vehicles of Science Fiction and Fantasy” exhibition, which is the most significant museum exposition of sci-fi movie vehicles anywhere. The latest changes push beyond the category to encompass a wider collection of vehicles, movies, and television series. Vehicles from the smash hit “Black Panther,” the “Men in Black” and “Back to the Future series,” and the “Ghostbusters” and “Batman” movie franchises are now showcased.

Ghostbusters and Back to the Future

One of the stars is the 1959 Cadillac Miller-Meteor dubbed “Ecto-1,” initially made legendary as the rapid response vehicle for the troupe of “Ghostbusters.” The transformed ambulance made numerous appearances in the sequels to the earliest 1984 hit, including the more recent restart “Ghostbusters: Afterlife.” While “Ecto-1” received bodily modifications over the years, it will exhibit in its original 1984 form.

One more Hollywood vehicle coming back is the 1981 DeLorean “Time Machine” from the “Back to the Future” movie franchise. The producers initially chose the DMC-12 as the basis for the renowned time-traveling DeLorean because of its stainless-steel structure and gullwing doors. Multiple versions of the DeLorean “Time Machine” were created for the two sequels, but this is the lone example showing in all three films.

“Some vehicles used in television and movies have become just as popular as the stars themselves,” said Petersen Automotive Museum Executive Director Terry L. Karges. “We are excited to display what are genuinely some of the most iconic vehicles from Hollywood’s long and storied history of film and television series production. The unique collection is sure to appeal to fans of movies and television along with any automotive enthusiasts.”

Other noteworthy distinctive additions to the new exhibition include the Batmobile from “Batman” and “Batman Returns.” That vehicle, based on a 1967 Chevrolet Impala, was driven by Michael Keaton. It features a potent big-block Chevrolet V8 engine and parts from a British Harrier fighter jet.

Also on display is the sophisticated Moto-Terminator motorcycle that emerged in “Terminator Salvation.” In the movie plot, that motorcycle was designed to hunt down humans, developed by the notorious Skynet artificial intelligence entity to destroy humanity. The killer robot motorcycle is constructed over the framework of an actual 2009 Ducati Monster 1100 S.

Yet another featured model is the classic 1976 Ford Gran Torino from the “Starsky and Hutch” television series. That show ran throughout the last half of the 1970s, starring Paul Michael Glaser as detective Dave Starsky. His “Hutch” counterpart was the actor David Soul in the role of detective Kenneth Hutchison.

The car, though, was just as famous, a two-door Ford Gran Torino with a bright red patina with large vector white stripes on its sides. The “striped tomato” belonged to Starsky, while Hutch’s car was a pummeled tan 1973 Ford Galaxie 500. Suffice to say, the Gran Torino was the vehicle of choice when the detectives rode together with Hutch’s car forgotten by all but the most avid followers.

If you find yourself in the Los Angeles area, a visit to the Petersen Automotive Museum is a must. The cost of admission is $17 for most adults, $15 for senior citizens, and $12 for children ages 4 to 17. Active military members with identification, personal care attendants, and all children under age four are admitted without charge. The museum is open from 10 a.m. to 5 p.m. every day