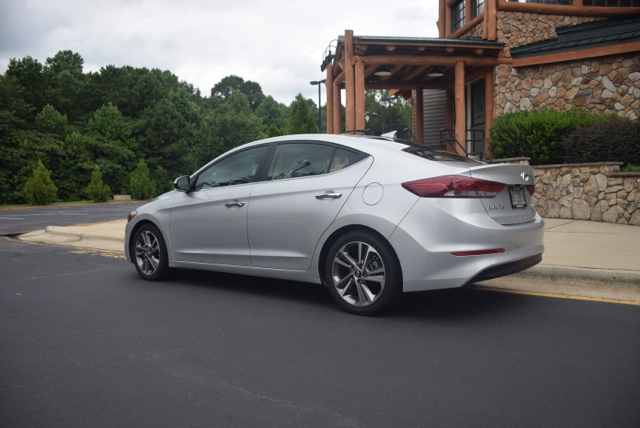 The 2017 Hyundai Elantra is all new, a compact sedan introduced in the early 1990s. Now in its sixth generation, the front-wheel drive Elantra continues to push the envelope in a competitive segment, by offering premium touches for this mainstream model.

For my weekly driver, a Hyundai Elantra Limited edition was supplied, a fully-loaded sedan with a sticker price of $27,710. Yes, small cars now come with bigger prices, especially when you choose one optioned with all the bells and whistles previously not offered in this segment. 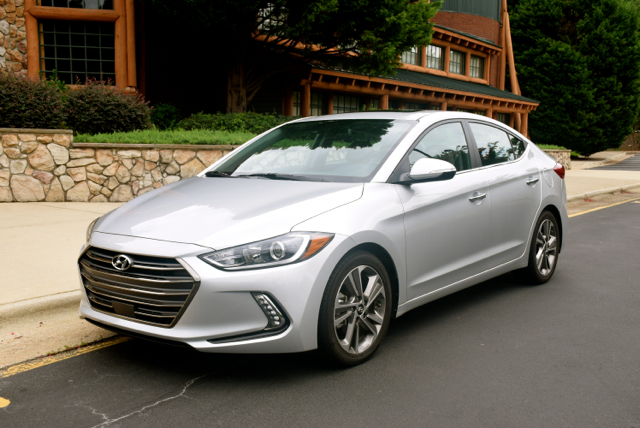 The size differences between fifth- and sixth-generation models are nearly negligible. Both models sit on a 106.3-inch wheelbase, although the new model is nearly an inch longer overall. The width of the 2017 editions comes in a full inch wider and its height is 0.2 inches taller.

The most noticeable changes to the exterior can be found in the front fascia as the new model has a one-piece trapezoidal grille instead of the previous small upper grille and the large lower grille. The current expression now parallels that of the midsize Sonata sedan and includes new headlamps with LED daytime running lights and updated embrasures housing the stacked jeweled LED fog lamps.

Sharp creases along the hood as well as on the profile supply this model with definition. Hyundai relaxed the previously flared wheel wells, effectively providing the Elantra with an enhanced formal presentation. From the rear, the 2017 Elantra features a trunk lip spoiler, wraparound combination lamps, and reflectors.

Inside, room is for five. The expected bucket seats are up front and a 60-40 split-folding bench seat is in the rear. Cloth seats are standard; the Limited edition features leather seats. A power driver’s seat with lumbar support is standard across the model line.

As for the driver’s perspective, the cabin is sensibly ordered with switches and other controls located on the door, on the lower dash to the left of the steering wheel, and on the face of the steering wheel. The instrument panel is composed of two analog displays — tachometer and speedometer — with a digital driver’s information center between the two. 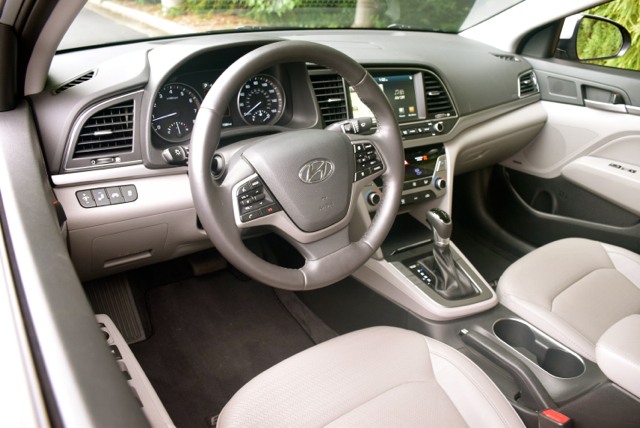 Hyundai orders the center console by placing the color display at the top and flanking it with the air vents. Beneath that are knobs and switches for controlling the audio system, followed by climate control. At the base of the console is a covered storage area, large enough to hold your smartphone. You’ll find USB and auxiliary ports as well as a 12-volt outlet inside.

The 2017 Elantra comes well equipped, at least when you move beyond the base model. That base edition equipped with a manual transmission has 15-inch steel covered wheels, keyless entry, power accessories, a tilt and telescopic steering column, air conditioning, and map lights. Beyond the base package, you can upgrade to get Android Auto, Apple CarPlay, a rearview camera with guidelines, cruise control, Bluetooth connectivity, heated outside mirrors, and 16-inch alloy wheels. 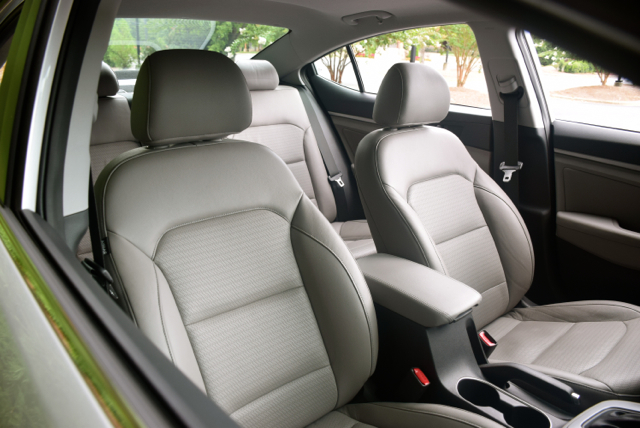 I mentioned earlier a $2,500 tech package. Here, you get an 8-inch color display, an 8-speaker Infinity audio system, heated front seats, a power sunroof, and an automatic dimming rearview mirror. The $1,900 Ultimate package brings in HID headlights with dynamic bending light technology, automatic emergency braking with pedestrian detection, smart cruise control, lane keep assist, and an integrated memory system for the driver’s seat and the side mirrors. By the way, those side mirrors tilt down when you shift into reverse, a nifty safety feature typically found only on luxury models.

Beyond the $125 carpeted floor mats, other accessories available include a first aid kit, a trunk cargo net, wheel locks, rear bumper appliqué, an interior light kit, and an automatic dimming mirror with HomeLink and Blue Link.

Two Engine Choices, a Third is on the Way

Gone is the previous 1.8-liter, four-cylinder engine. In its place is a 2.0-liter, four cylinder making 147 horsepower and 132 foot-pounds of torque; a sportier version of the same was previously offered. You can still get a 6-speed manual transmission if you want one, but it’s available with the base edition only. Otherwise, a 6-speed automatic is your sole choice in the SE and Limited editions.

The all-new Eco model brings in a 1.4-liter, turbocharged four-cylinder engine making 128 horsepower and 156 foot-pounds of torque and pairs it with a 7-speed dual-clutch transmission. As for the upcoming 2017 Elantra Sport, word has it that it will be powered by a 1.6-liter, turbocharged four-cylinder engine, one specially tuned to shine in the segment. 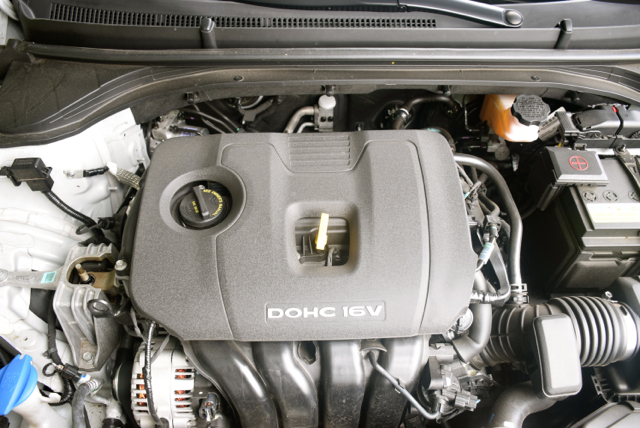 Take this sedan on the road and you will find the engine optimized for fuel economy, not for power. Hyundai does considerably well in the fuel economy department and typically offers one model with the power credentials to go with it. The SE, Eco, and Limited are not it — you’ll need to turn your eyes to the Sport when it arrives later this year.

That said, the 2017 Elantra provides sufficient power as you move away from a dead stop. If you floor it and expect a huge burst of power in return, you’ll be disappointed. Nevertheless, this sedan moves down the road with precision and you won’t fear being overtaken by a fast approaching semi. Steering and handling is fairly uninvolved.

Hyundai does supply drive mode select — normal, eco, and sport — what allows you to adjust the engine and steering inputs. With the former, you’ll notice longer shift times between gears. With the latter, a certain “heaviness” is experienced in the steering.

One problem not apparent is torque steer — this sedan stays the course at all times. As for braking, it is firm to the touch with only minimal brake fade noted. 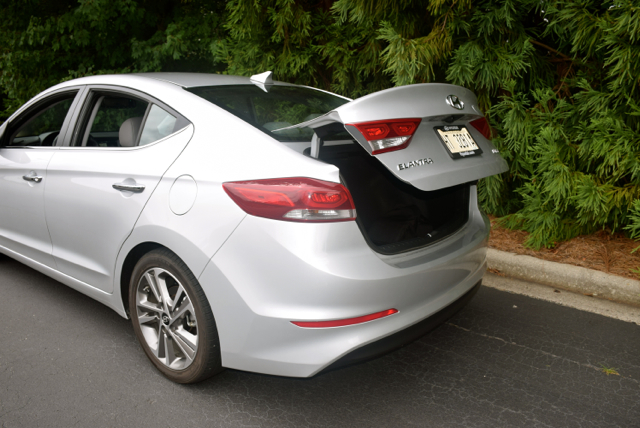 As for considering the Hyundai Elantra, you can’t go wrong with having it on your list. The standard 5-year, 60,000-mile new car warranty is the best in the industry as is the 10-year, 100,000-mile powertrain warranty. These warranties were rolled out when consumer perceptions were still behind the tremendous improvements Hyundai had been making in quality and reliability throughout the 1990s and 2000s. That Hyundai hasn’t curtailed its warranties means extra value and security for the buyer.

When it comes to choosing your Elantra, consider your basic package and build it from there. The biggest challenge to the Elantra may not come so much from the likes of the Toyota Corolla, Ford Focus, Honda Civic, and other competitors, but through the value proposition afforded by the midsize Sonata. Indeed, you can come away with a well-equipped Sonata for under $26,000, which is lower than the Elantra Limited, while also offering a roomier interior and equivalent fuel economy.