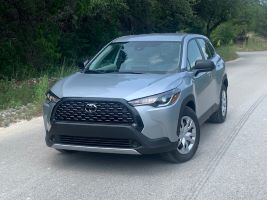 That Toyota chose the Corolla name for its latest crossover utility vehicle makes sense. After all, the Corolla is one of the best-selling models of all time, with more than 50 million units produced since its 1966 inception. Declining car sales in the U.S. market notwithstanding, the cache wrapping the Corolla name was simply too hard to ignore. Now, the Corolla product line is comprised of a sedan, hatchback, and crossover. We already have a Corolla Hybrid sedan; expect a Corolla Cross Hybrid in 2023.

The Corolla Cross is new to the U.S. market, although it has found its way to a few markets ahead of its fall stateside debut. The U.S.-spec model will be built at the new Mazda Toyota Manufacturing Plant in Huntsville, Alabama. Notably, the joint venture means that up to 150,000 units of the Corolla Cross can be assembled there annually. A Toyota spokesperson says that the automaker expects to reach that capacity by its third year.

Besides the Nissan Rogue Sport, the Corolla Cross has several other competitors in the market. In our press gathering, Toyota named the Subaru Crosstrek and Hyundai Kona as two of its competitors. Other models worth cross-shopping include the Honda CR-V, Ford Bronco Sport, Volkswagen Taos, Jeep Renegade, and the Kia Seltos. We believe the Kia Soul is another model worth a comparison. 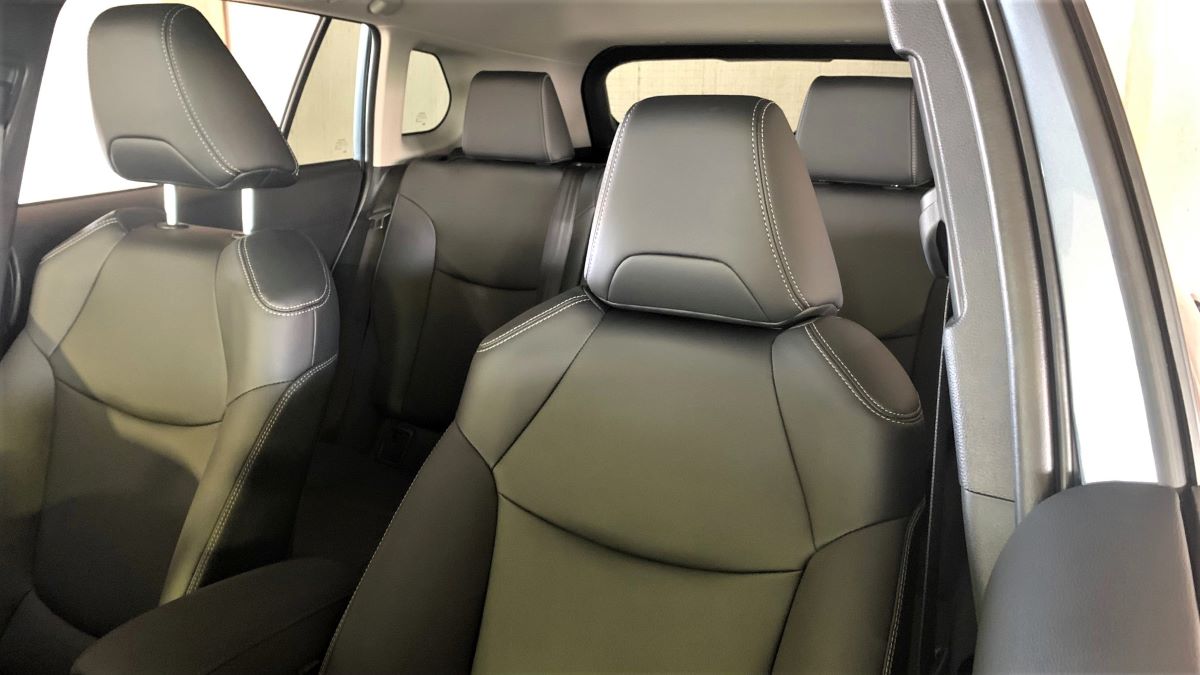 Among the upgrades are 17- or 18-inch alloy wheels, fog lamps, roof rails, and power-controlled and heated side mirrors. Bundled within certain packages are a moonroof and a power rear liftgate.

This crossover’s cabin is relatively roomy and open, offering space for four or five in a pinch. Most trims make use of hard and soft materials with standard cloth seating. Upgraded cloth seats and imitation leather are available. Full power accessories, air conditioning, and rear HVAC vents are included.

The list of upgrades includes automatic climate control – single or dual zone. Push-button start, a leather-wrapped steering wheel, a power driver’s seat, and heated front seats are available. A rear-folding armrest and a tonneau cover are other available features of note.

Up to 26.5 cubic feet of standard cargo space graces this model. Fold down the rear seat and that space more than doubles to 66.8 cubic feet for one of the largest measurements in its class. Consequently, the rear compartment is large enough to hold modest-sized yard sale finds. 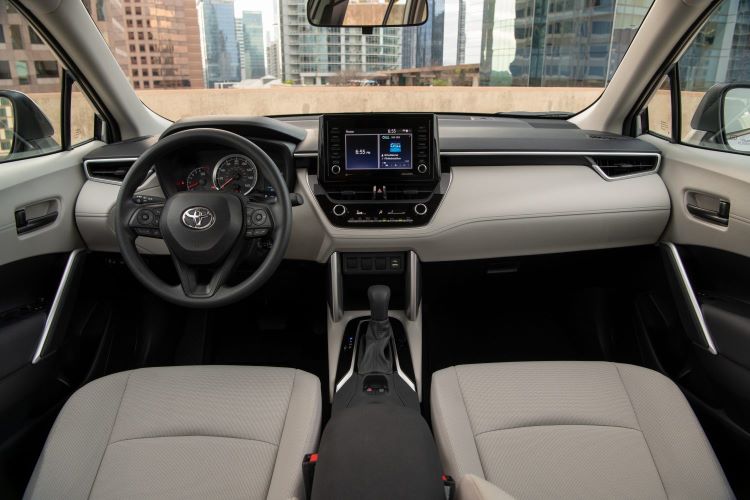 Qi-compatible wireless charging is included with the LE and XLE trims. Moreover, both trims gain a USB port for the rear compartment. A 9-speaker JBL audio system is optional with all but the base model.

Toyota continues to offer standard driver-assist tech features with its many models. In the Corolla Cross it is the Toyota Safety Sense 2.0 package. This one includes a pre-collision system with pedestrian and cyclist detection, lane departure alert with steering assist, and lane tracing assist. Furthermore, the package includes automatic high beams, road-sign assist, and full-speed cruise control with stop and go.

Separately, blind-spot monitoring with rear cross-traffic alert is included. On the XLE trim, Toyota swaps out the alert for automatic braking. An adaptive front-lighting system with automatic leveling is available. 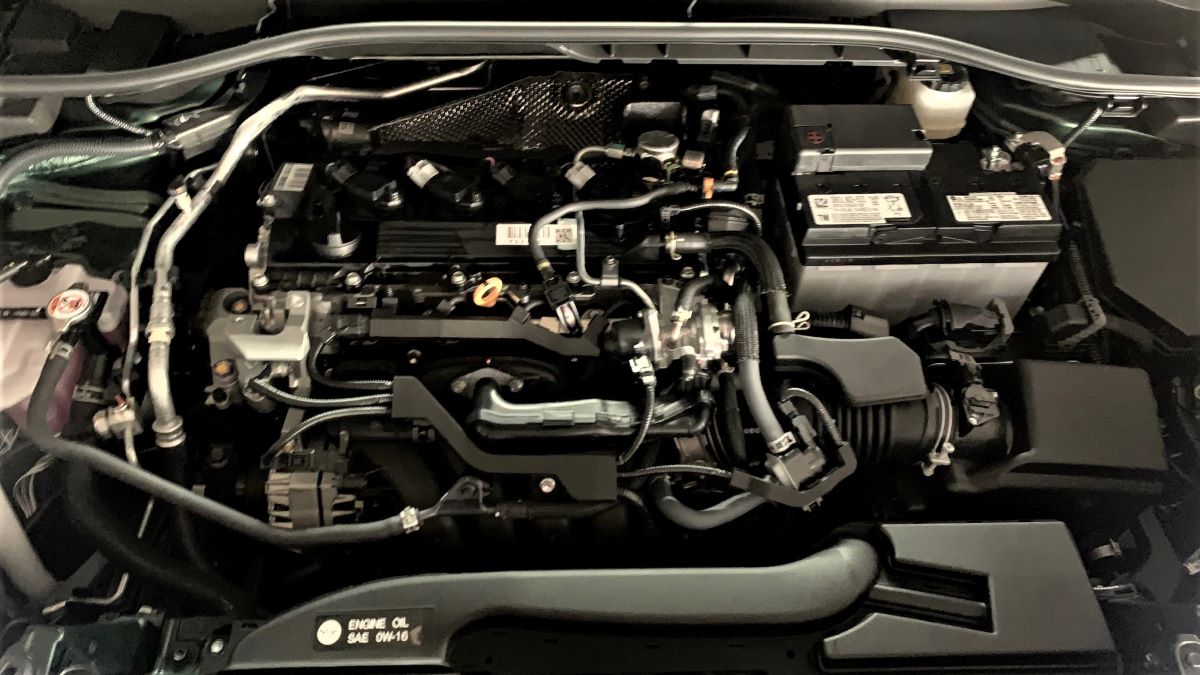 Toyota gave journalists plenty of opportunities to drive the Corolla Cross. All three trims were available and included both front-and all-wheel-drive choices. This writer rode or drove in five versions fully apprise its capabilities.

On the power side of the house, there is no difference between trims. Indeed, with only one powertrain choice available, it is easy to deduce how well this model will perform under a variety of conditions. We found the Corolla Cross engine offers average power, while the continuously variable transmission shuttles power to the wheels largely without drama. The difference with the Toyota CVT though is that it relies on a planetary or fixed gear to kick things off – this is useful as CVTs are notoriously slow when moving away from a dead stop.

The engine is loud at times, especially under full throttle. The CVT eases as well, pulling back on the band curve. We found the steering responsive and nicely weighted. We also appreciated the tight turning radius afforded when needed. The Corolla Cross offers a relatively smooth ride with average cabin quiet. The brakes are firm to the touch.

You won’t be taking the Corolla Cross off road unless you count well-worn paths or gravel roads in the mix. The advantage of all-wheel drive is apparent with its independent suspension system and torque management system. Indeed, that system shuttles up to 50 percent of the power to the rear wheels when needed.

We did not have any model for long before switching to another trim to test it. Yet, we could see that the gas gauge needle was slow to move down, confirming its efficiency. Per the EPA, the front wheel-drive version averages a combined 32 mpg city and highway, while the all-wheel drive model averages 30 mpg. These numbers match or are better than what its competitors achieve. 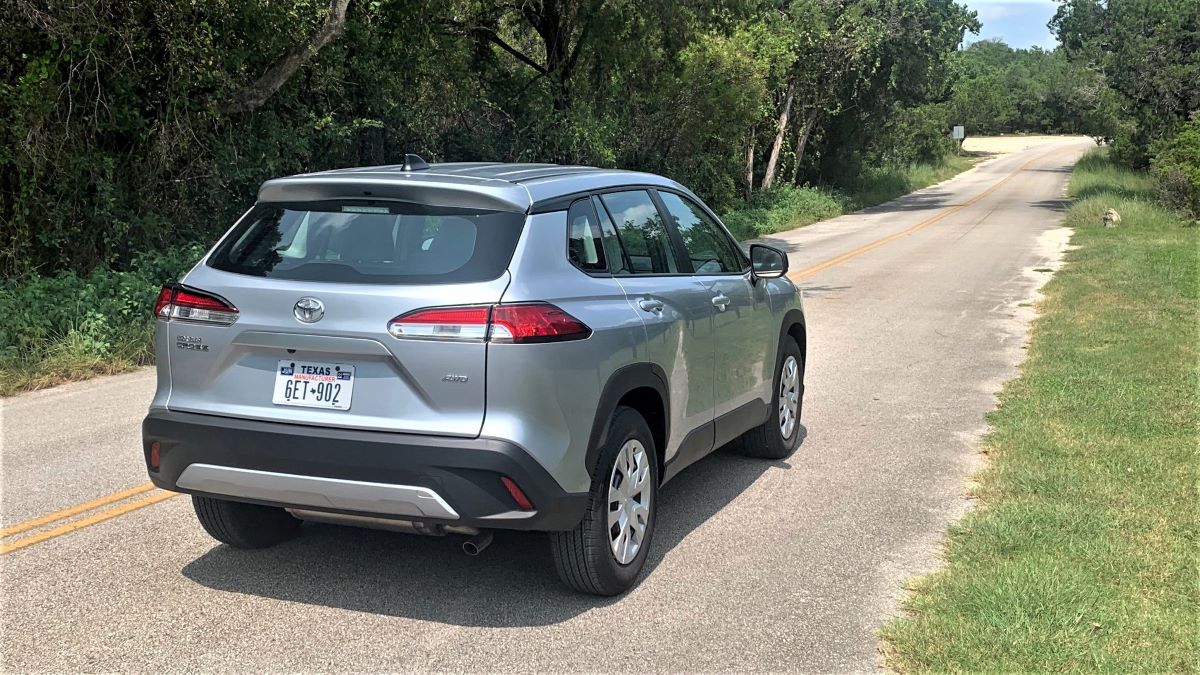 A one-day preview of a new vehicle gives journalists a decent understanding of how a model looks, feels, and performs. Yet, it takes about a week of driving to fully ascertain just how well it will perform overall.

This writer owns a similar 2020 Corolla sedan. Thus, there are more similarities between them with the powertrain and interior than there are differences. We are Corolla fans and can see the Corolla Cross as a viable alternative to the other body styles.

All in all, the 2022 Toyota Corolla Cross makes the grade and should meet the automaker’s sales expectations. If there is one demerit that nags us, it is the shortened front seats that do not offer enough thigh support for tall passengers. Other than that, we would head to the XLE trim and opt for a moonroof and power liftgate. As equipped with all-wheel drive, this example costs about $30,000, and that is still thousands of dollars less than a similarly equipped Toyota RAV4. 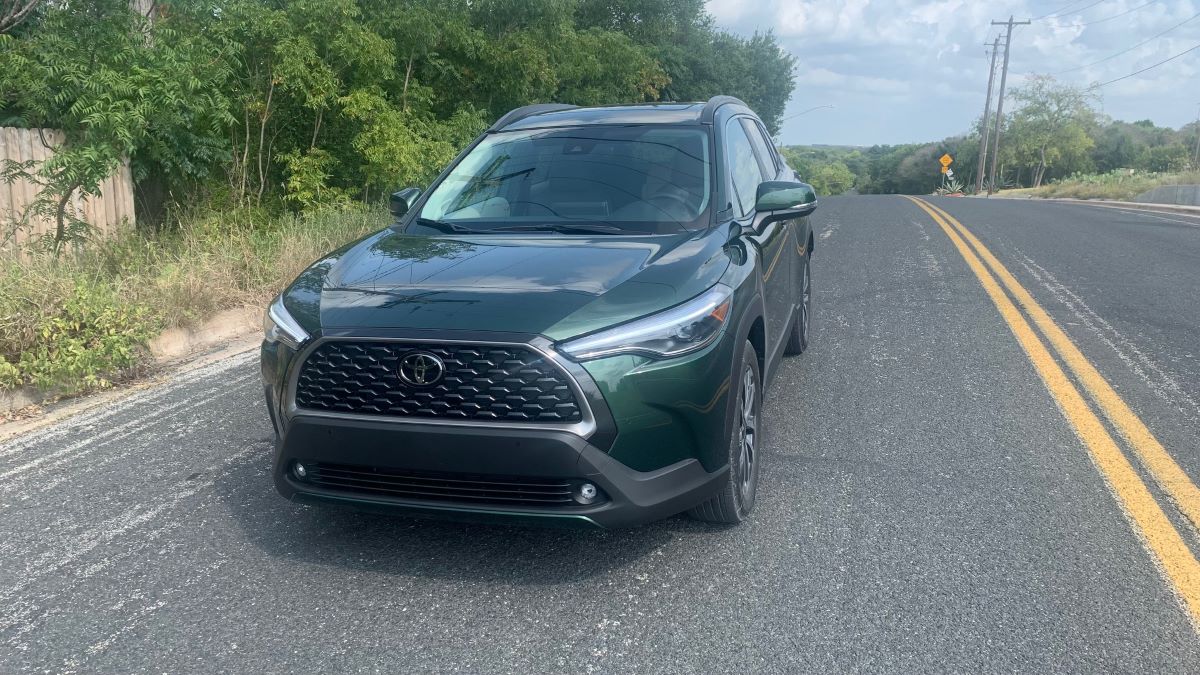 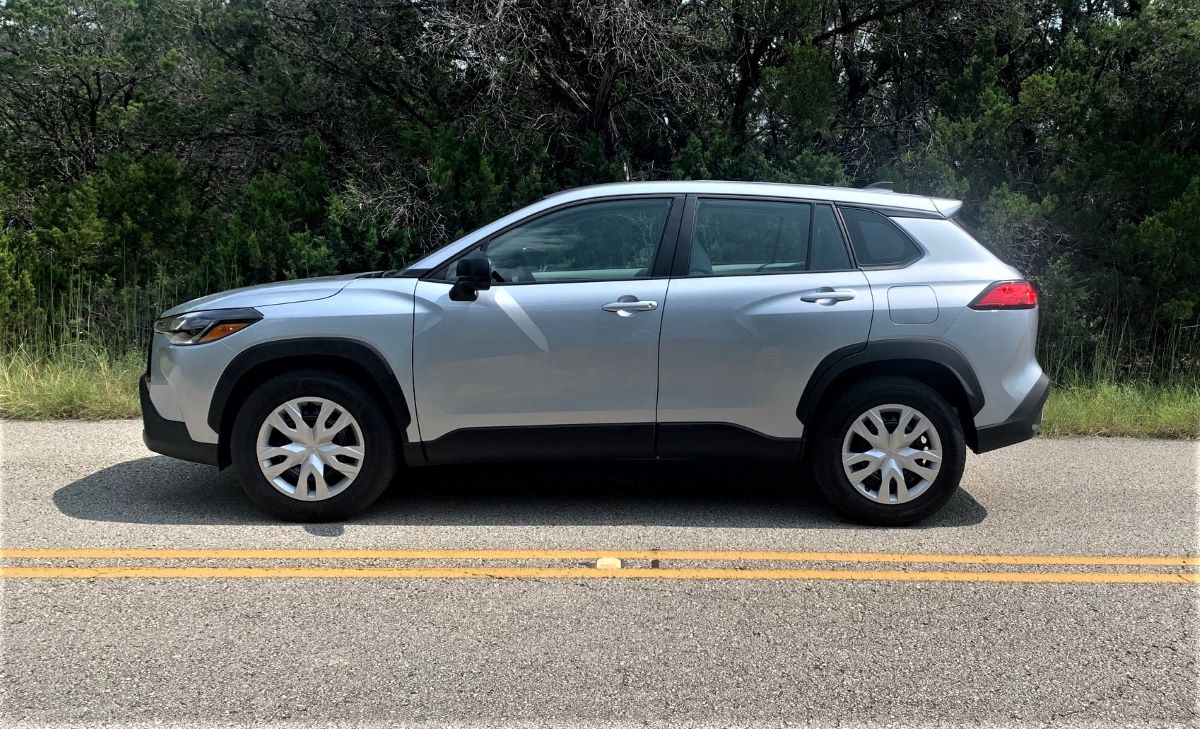 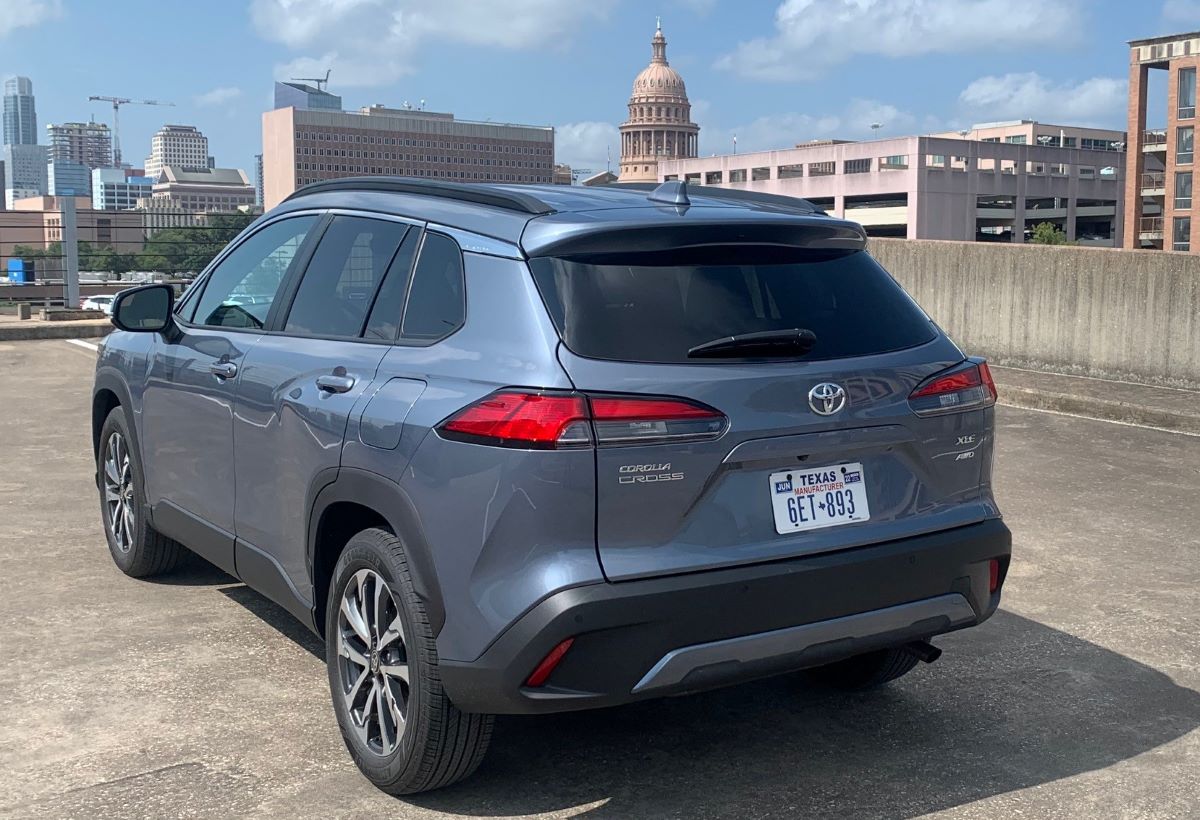 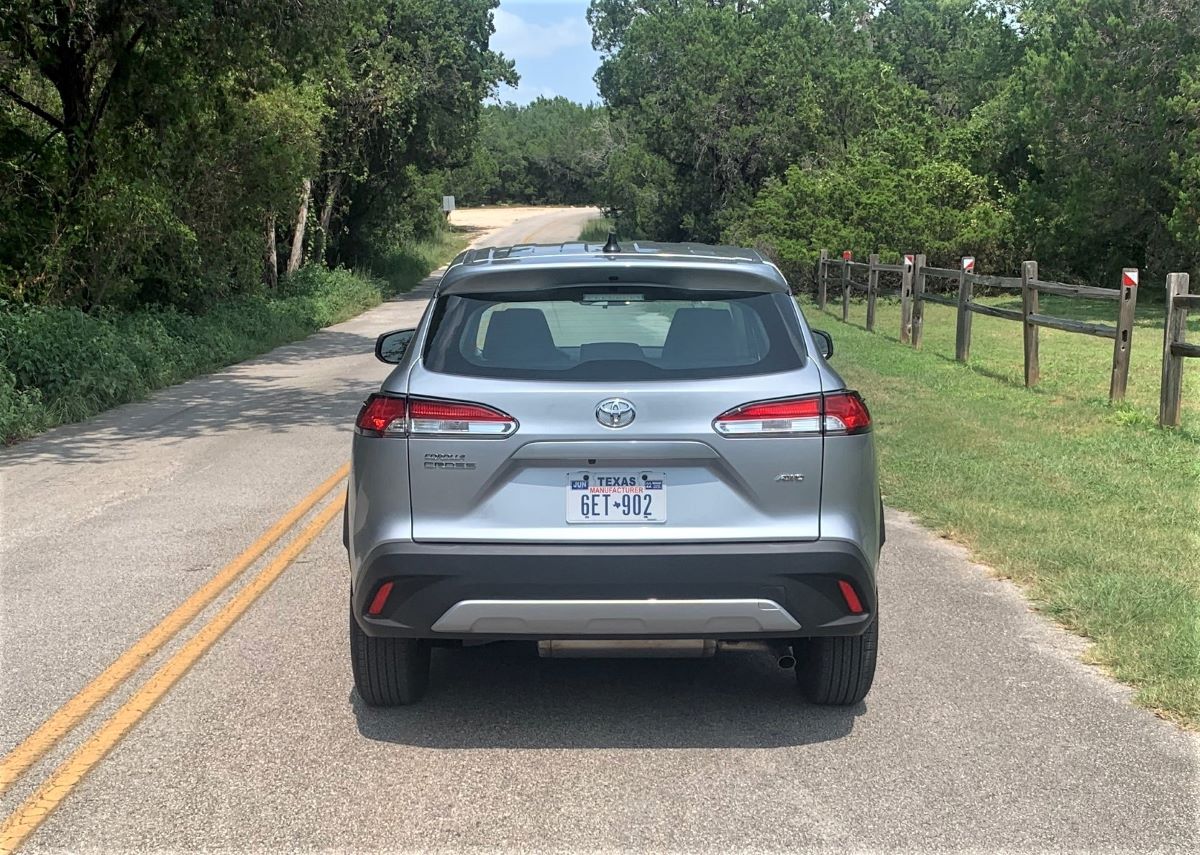 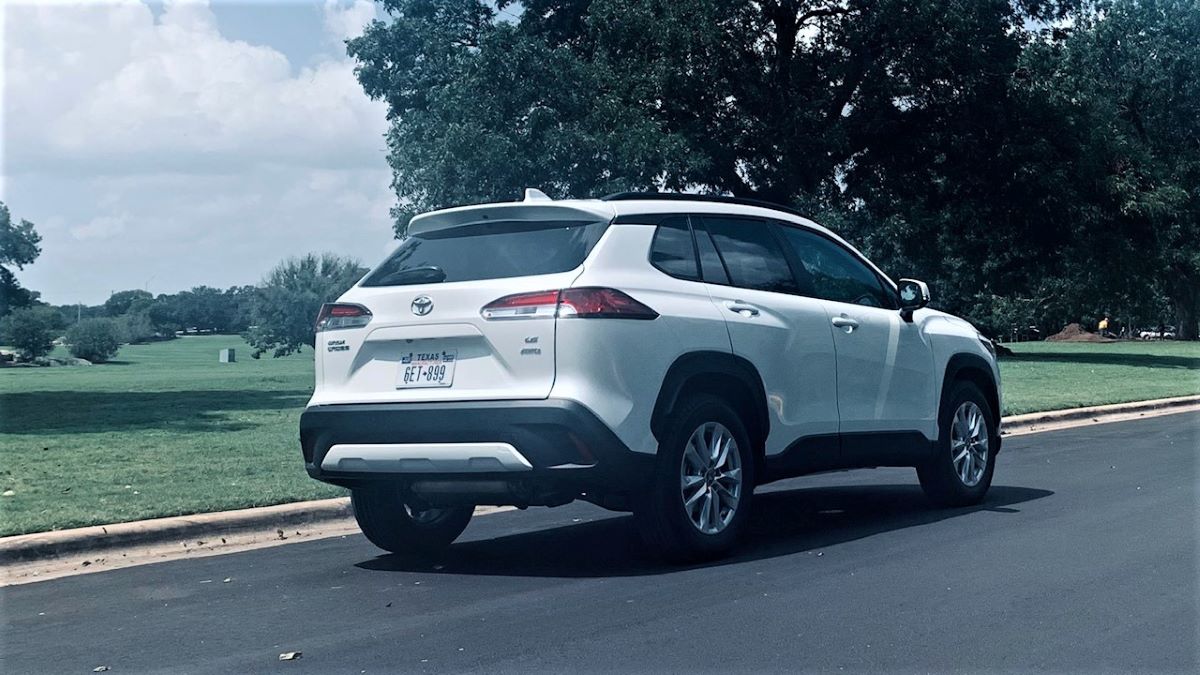 See Also — What is the Toyota Avanza?