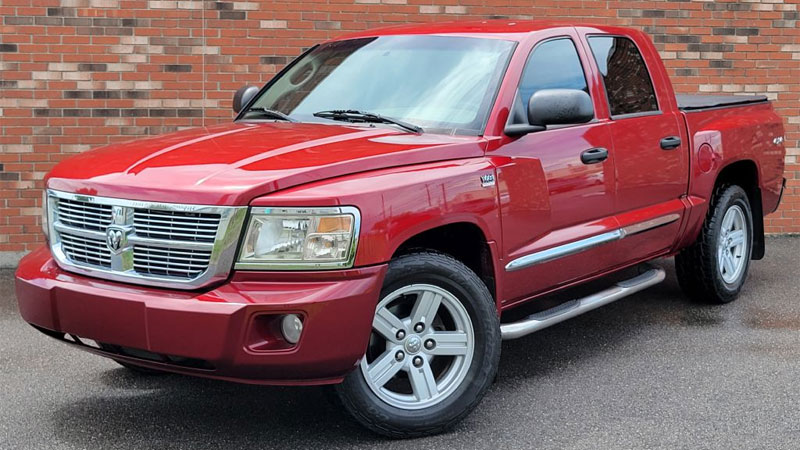 A source familiar with Stellantis’ plan says a new Dakota is in the works. The Dodge (Ram) Dakota was discontinued in 2011.

The Ram brand is firmly under the control of Stellantis, the new entity that combines Fiat Chrysler with the PSA Groupe. As part of the new company’s product review, the previous plans for Ram are receiving scrutiny, to determine how they’ll fit within Stellantis’ mission.

We’ve received confirmation that the beleaguered Chrysler and Dodge brands will survive under Stellantis and also know that Jeep and Ram are important components, and profit centers, for the company.

All four traditional U.S. brands have a future, with Dodge remaining the performance brand, while Chrysler’s role must still be defined.

One of the products planned for Ram is a new Dakota pickup truck. That model will share the Jeep Gladiator’s platform, although differences in design will likely give this midsize model a distinct appearance. We haven’t seen a Dakota in a decade when Dodge trucks became Ram and the Dakota name was canceled soon thereafter.

As February drew to a close, rumors surfaced online that Stellantis canceled the Dakota product. At least one automotive blog shared the “news,” which was disseminated on Twitter through the following tweet, “Stellantis has cancelled the Ram Dakota so the company can focus towards Electrification. The Dakota was expected to be based on the Jeep Gladiator and be powered by the 3.6L Pentastar V6.”

But a few days after the “news” emerged, an unidentified source told Automotive News that the rumors were just that – rumors. Yet, the industry’s newspaper of record held back from fully endorsing this viewpoint by referencing the new Stellantis pickup as Schrödinger’s Dakota, playing on the late Austrian theoretical physicist’s thought experiment of a test subject cat that might be placed in a box with something that could eventually kill it (such radioactive atom).

You wouldn’t know if the cat was dead or alive until the box was opened, so in a sense, the cat was considered both “dead and alive” while in that state.

For the long story made short, the Schrödinger Cat experiment is often used to relate to other worldly matters, particularly news of a product’s impending demise (or resurrection). The scientific reference is perhaps fitting, given the uncertainty/vagueness/contradiction of the rumors.

That said, Auto Trends maintains that a midsize pickup truck is essential for the Ram line, perhaps more so than for Jeep. Yes, the Gladiator is already in place, but Ram is Stellantis’ truck brand, thus giving customers a 1-2 pickup truck punch makes sense.

After all, Ford, Chevrolet, Ram, GMC, Toyota, and Nissan have two models in place…in some cases three if you separate the light-duty trucks from the heavy-duty lines, such as the Ford F-150 and the Ford Super Duty.

Though it has been 10 years since the last Dakota was built, rumors of its return have come and gone. When Ford committed to returning the Ranger to the North American market, it was certain Ram would do likewise.

Later, Fiat Chrysler officials confirmed a new Dakota model, one utilizing the Gladiator’s platform, but with some distinct differences to align the truck with the brand.

Among the rumors of the Dakota’s cancellation surfaced a possible reason: that Stellantis was devoting its resources to electrification. Well, that is true and among the models slated for the electric treatment is the Jeep Gladiator pickup truck itself, particularly in hybrid guise.

Given that the Gladiator platform will support an EV, it’s logical that the Ram Dakota would also see such an option. That’s a great way to spread and share costs, by utilizing two or more models and building out from there.