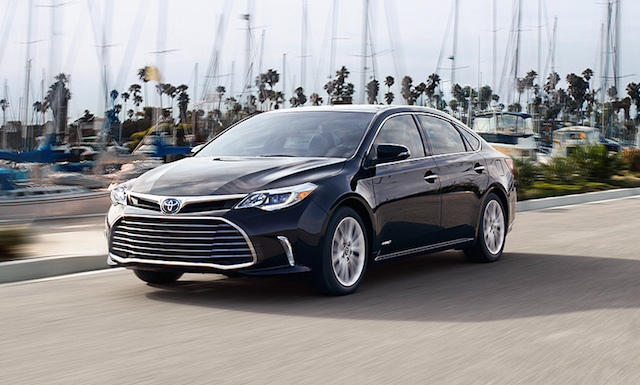 The segment for traditional, large sedans is a small one, yet important to manufacturers nonetheless. For Toyota, the Avalon has faithfully served the brand for two decades, representing a plush, front-wheel drive vehicle that will be refreshed for the 2016 model year.

The Chicago Auto Show served as the perfect venue to unveil three new or special edition Toyota models at the McCormick Place convention center. At a media event held just before the start of the Chicago show, Toyota showcased a pair of special edition Camry and Corolla models. In addition, a refreshed Toyota Avalon was presented, representing a mid-product-cycle update of the current generation model introduced four years earlier.

As before, the 2016 Toyota Avalon will be powered by a 3.5-liter, V-6 engine paired with a six-speed automatic transmission. The refreshed model will feature five categorical editions — XLE, XLE Plus, XLE Premium, Limited and Touring. A hybrid edition also returns and will be available in XLE Plus, XLE Premium and Limited editions.

One of the more significant changes for 2016 is the development of a pair of unique suspension systems “to better align with diverse customer preferences.”

The first retuned suspension system will place an emphasis on ride comfort for the XLE through Limited grades. The second system will deliver a more dynamic and responsive driving experience for the Touring grade alone.

These changes enable Toyota to keep Avalon at the top of the segment, in a bid to fend off its closest competitors, specifically the Ford Taurus, Chevrolet Impala and Nissan Maxima.

Further changes will be noted in the XLE and XLE Plus editions. As enumerated, customers will find: redesigned 17-inch alloy wheels, a 7-inch Entune Audio Plus screen, premium woodgrain dash ornamentation, and a tire-specific tire pressure monitoring system.

A refreshed Avalon comes as sales for the current model slipped by 5.4 percent to 67,183 units in 2014. That figure compares to a 5.1 percent Toyota brand increase for the year as Camry, Corolla and RAV4 led the charge last year. Thus, with a tweaked flagship sedan in place, Toyota will be better positioned in the market for the next few years with customers benefiting from a suite of notable refinements.

As for the Camry and Corolla, a pair of special edition models will augment each product line.

The Camry Special Edition, with a target build of 12,000 units this year, will receive machine-faced, 18-inch wheels, smoked taillights and a standard moonroof. Inside, high contrast blue stitching, black SofTex seats with blue inserts, and a blue meter cluster will be offered. A smart key system with push-button start and a Qi wireless charging system for smartphones will also be included.