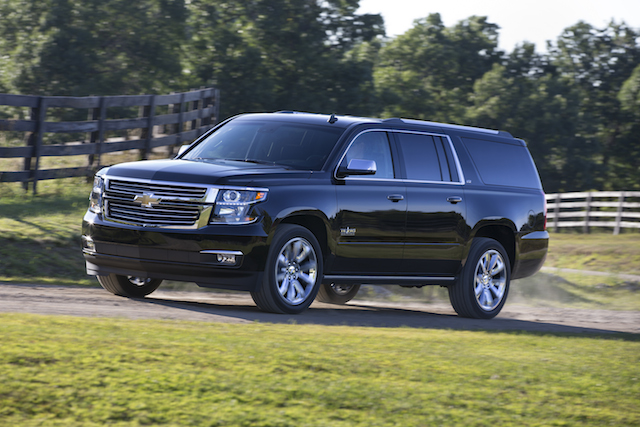 Model names like Corolla, Civic and Beetle seem to have been around forever, but it is the Chevrolet Suburban that takes the prize as the longest continual model in the world. Come 2015 it will celebrate its 80th anniversary, representing 12 generational changes dating to the heart of the Great Depression.

To mark its anniversary, an all-new model will make its debut in the first quarter of 2014. That model, the 2015 Chevrolet Suburban, will be joined by the smaller Tahoe as well as the similar GMC Yukon and Yukon XL. All four models will preserve the body-on-frame truck characteristics that have long defined this line. Unibody construction? Don’t count on it for many more years.

The release of the next generation Chevrolet Suburban comes as large SUV sales continue to rise. This, despite gas prices that are well above $3 per gallon across the country, approaching or topping $4 per gallon in some states. Through the first six months of this year, Chevrolet Suburban sales are up 16 percent, keeping pace with industry-wide growth.

GM is bullish about its big SUVs, profitable vehicles that maintain a loyal customer base. These vehicles are popular with large families, outdoor enthusiasts and are oftentimes marshaled as fleet vehicles, providing the livery support that many companies want. Said Dan Amman, GM executive vice president and CFO, “This is an important and profitable segment and we have set the bar high to ensure we provide our customers with great quality and performance they expect and deserve.”

The standard engine for the 2015 Chevrolet Suburban is GM’s small-block V-8 displacing at 5.3 liters. This engine makes 355 horsepower at 5,600 rpm and 383 foot-pounds of torque at 4,100 rpm. It features direct fuel injection with cylinder deactivation, the latter shuts down four cylinders at highway cruising speed to conserve gasoline. This engine is teamed with a six-speed automatic transmission.

The Chevrolet Suburban adds 14 inches to the Tahoe’s 116-inch wheelbase and is 224 inches long. That’s 20 more inches than the Tahoe. The width for both vehicles is 80.5 inches; height comes in at 74.4 inches. Chevrolet Suburban curb weight ranges from 5,576 to 5,815 pounds, shedding just over 100 pounds in the 4×2 model while maintaining nearly the same weight as the current 4×4 Suburban.

The twelfth generation Chevrolet Suburban brings in many new features including keyless entry with push-button start, an eight-inch color screen with the latest version of Chevrolet MyLink, up to six ports and six power outlets including a three-prong 110-volt outlet, an available rear seat entertainment system with dual screens and a Blu-Ray DVD player, fold flat second- and third-row seats, and a conversation mirror.

A 360-degree radar system is also new, part of a safety package that includes crash avoidance and passenger protection. Other safety features included or available are: forward collision alert, front parking assist, lane departure warning with lane keeping assist, rear traffic cross alert and adaptive cruise control. A center stack airbag, unique to GM, will be included with both the Tahoe and Suburban.

The exterior is marked by the latest Chevrolet truck/SUV fascia and includes projector-beam headlamps. Choose the LTZ edition and high-intensity discharge headlamps and light-emitting diode daytime running lamps are included.

GM says that the next-generation Chevrolet Suburban and Tahoe is quieter than the current edition with improved steering and braking feel. This model features a stronger frame, a wider rear track, magnetic ride control with the LTZ edition, standard 18-inch wheels and available 20- and 22-inch wheels, variable-assist power steering, and four-wheel disc brakes.

Made in Texas, USA

GM taps its assembly plant in Arlington, Texas, to build its large Chevrolet and GMC SUVs. That plant will begin production of the 2015 Chevrolet Suburban later this year, continuing a long string of full-bodied SUVs that have played an integral part in the North American auto industry.