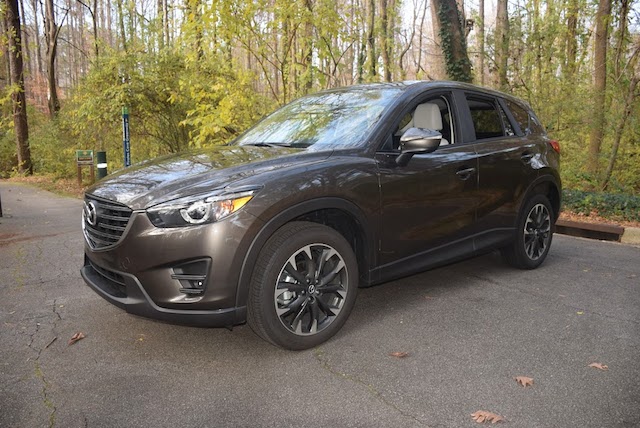 Mazda has had much success with its small utility vehicles, selling the Tribute from 2001 to 2011 and the CX-7 from 2007 to 2012. Still, the automaker had lacked a strong competitor to go up against the likes of the Honda CR-V, Ford Escape, and the Toyota RAV4, and a new model was in order. That model is the Mazda CX-5, now one of three SUVs sold by this niche Japanese brand.

The Mazda CX-5 advances the brand’s flowing KODO or soul of motion design on an SUV frame, not an easy task considering that such body styles typically aren’t especially handsome. But this manufacturer found a way to apply the same design energy to the vehicle’s frame and has successfully delivered one of the more admirable products in its segment.

My weekly sample of Mazda CX-5 driving came in the form of a Grand Touring AWD edition, the top-of-the-line model in this SUV line. Routinely, manufacturers send out the best of the best for media inspection, what tends to skew journalist objectivity. I’ll try to do my best here to present a more balanced and comprehensive look at the middle product in Mazda’s three crossover utility vehicle range.

Introduced in 2013, the Mazda CX-5 replaced the slightly larger CX-7, filling the gap created by the Tribute’s cancellation two years earlier. The CX-5 is sized between the two retired models, but offers a better layout and more interior room than the larger CX-7. Calling it the CX-5 allows Mazda to someday slip a new model between the CX-5 and CX-9, but that may not be necessary.

Choose the Mazda CX-5 Sport and you’ll pay from $24,965. Select the Grand Touring edition and your price comes in at $27,970. As delivered, the sticker price on the test model reached $32,340 as such options as all-wheel drive ($1,500) and a Grand Touring Tech Package ($1,505) with navigation; adaptive front lighting; LED headlamps, fog lights, daytime running lights; LED rear combination lamps; and automatic brake support are found.

The flowing silhouette of the CX-5 is marked by a pronounced upper grille, wraparound headlights, a sporty lower grille opening, and flared embrasures housing the optional fog lamps. Deep sculpting along the hood gives way to the same along its profile. Distinct character lines around the wheel wells and across the SUV’s profile are also evident.

The CX-5 features a canted windshield, a sloping roofline and a gradually rising belt line. At the rear is an integrated liftgate spoiler, wraparound combination lights, body sculpting reflectors, and as many as two exhaust tips. Notably, aluminum-alloy wheels are standard across the product line, measuring 17 inches in the base model and 19 inches in the Grand Touring edition. These wheels are set within all-season tires.

Inside, the CX-5 offers generous room for five with manual or power-operated bucket seats in the front and a 60-40 or 40-20-40 split folding seat in the rear. Heated front seats are standard on the Grand Touring; this same edition is also the one offering the three-place split-folding rear bench seat.

Behind the three-spoke steering wheel (with driver controls on the face) is a three-dial instrument panel with each dial housed within its own cowl. On the left is the tachometer, the center features the speedometer, and the right dial features digitized oil pressure and fuel economy readouts. At the base of the speedometer is a second digital display featuring trip miles and the odometer readout.

The center stack is cleanly laid out with a 7-inch color display at the top, followed by vents, then switches and knobs to manage climate control. At the base of the stack is a large open area for housing your smartphone with an SD card slot, two USB ports and an auxiliary input port present. The transmission shifter with a drive mode switch for enabling sport mode is also present.

A big dial managing the available MazdaConnect telematics system is where you’ll also find the audio system volume control — this is the first model I’ve driven where the audio system controls weren’t further up in the center console. Between the seats is a compartment, sized to hold your smartphone and two cup holders. A deep storage area between the seats includes a tray. This is where you will also find a 12-volt outlet.

All four doors come with pockets and are large enough to hold beverage containers. Seat back storage pockets and a deep glove box is also present.

What you don’t get with the CX-5 is a power liftgate. As long as the doors are unlocked, you can lift the door, but it won’t open for you automatically. The generously proportioned rear storage unit should be a family favorite with more than 34 cubic feet of storage space. Side storage pockets and a 12-volt outlet are also present. A temporary spare tire sits beneath the floor.

In the Grand Touring edition, latches automatically drop each section of the 40-20-40 rear seat. But the outboard seats will only fall forward if the front seats are moved up approximately half way. At nearly 6-feet tall, I don’t want to sacrifice leg room to drop the rear seat on my side.

On the road, the Mazda performed as expected. My wife has a Toyota RAV4, so I’m intimately familiar with the segment, having also driven Nissan Rogue, Kia Sportage, Ford Escape, and Hyundai Tucson models. A Honda CR-V will also be tested in the near future.

I like that Mazda still offers a 6-speed manual transmission, although it comes paired with the base engine only. Its a given that demand for manual gearboxes is too low for manufacturers to support these vigorously. Besides, the smaller engine may not have quite the level of power some owners want.

As for the larger engine, it seems suited to this SUV. What I did notice about the powertrain system is that it is loud under the hood. Furthermore, the transmission holds revs higher and longer than I would have expected — you have to remind yourself that a traditional automatic is sending power to the wheels, not a CVT.

Although the CX-5 has the look of sporty Mazdas, you shouldn’t mistake it for a Mazda 3 or any other sporty car. Its higher profile, average wheelbase size and overall dimensions mean you’ll have to take corners with ease. It isn’t a slouch on twisty roads, especially with all-wheel drive, and otherwise it handles as expected. Ride comfort seems better than average for this segment and the brakes are certainly firm.

Safety is a big issue these days as consumers consider what’s available to them. For its credit, Mazda achieved the Top Safety Pick+ rating from the Insurance Institute for Highway Safety, as the CX-5 was awarded the highest scores in all crashworthiness categories. This model also has an available smart brake system with collision warning, what ultimately gives the Mazda the institute’s highest score.

I understand that Mazda is emphasizing styling and fuel economy with this model. I’m also glad that they didn’t think they needed to include a pair of jump seats for a temporary third row along the lines of the Nissan Rogue. A more performance-oriented version would be fun, but with utility vehicles getting snapped up in record numbers, Mazda is positioned to meet most customer’s needs, including with its snazzy CX-5.