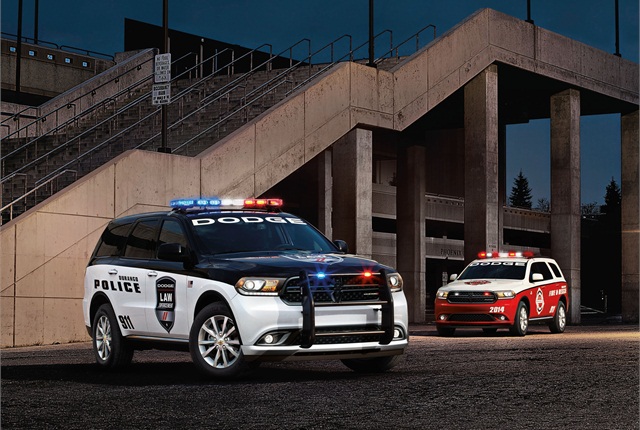 The new model is being built at the Jefferson North Assembly Plant in Detroit with orders being received now. The Durango is a crossover utility vehicle that shares its platform with the Jeep Grand Cherokee.

Two engine choices are available with the special service Durango: a 3.6-liter V-6 making 290 horsepower and 260 foot-pounds of torque and a 5.7-liter HEMI V-8 making 360 horsepower and 390 foot-pounds of torque. Both engines are paired with an eight-speed automatic transmission, helping to deliver upwards of a 15 percent fuel efficiency improvement over previous models. The HEMI also utilizes cylinder deactivation technology that shuts down four cylinders when operating at lower performance levels.

That special duty capability is apparent with the multiple upgrades this vehicle has received including a heavy-duty battery, a 220-amp alternator, a heavy-duty water pump and engine cooler, a heavy-duty brake package and a load leveling system.

Inside, the cabin was designed to meet the needs of government fleet buyers. This model includes a programmable seven-inch display in the gauge cluster, a Uconnect infotainment five-inch touchscreen with voice command and Bluetooth, a media hub for USB, SD media card and auxiliary jack integration, and Bluetooth streaming audio. This model is also equipped with new LED daytime running lamps and rear race track tail lamps, the latter lasting longer than traditional bulbs in a bid to reduce maintenance costs.

Exclusive to the Durango Special Service model is a rear cargo area equipped with under floor storage compartments and side storage compartments. Other modifications include a special service headliner, a red and white interior dome lamp, and spot lamp wiring preparation. Unlike other Durango models, the special service edition does not include a third row seat. Instead, it has been deleted to free up cargo capacity. However, the second row controls for heating and cooling remain in place.