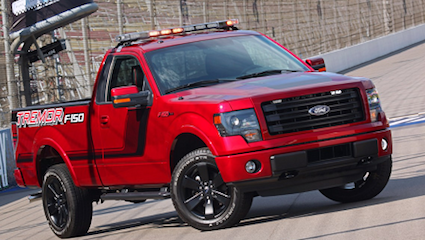 Hotrod and sporty trucks fill a niche in the auto industry, vehicles with sharp colors, flashy graphics, unique grilles and other special embellishments. Besides the “look” of a hot truck, such models usually back it up with plenty of performance.

For 2014, the Ford F-150 Tremor rolls out, a sporty truck that Ford says will go from 0 to 60 mph in just 6.5 seconds. Today, Scott Oldham, editor in chief for Edmunds.com hosted F-150 Tremor Product Marketing Manager, Brian Bell, for a web chat to discuss the Tremor, a vehicle that Bell says will retail from about $38,000.

The 2014 Tremor will be powered by a 3.5-liter EcoBoost V-6 engine rated at 365 horsepower. That same engine is available in other F-150 products, but Ford claims the Tremor’s lightweight package will provide a performance edge. Bell said that the Tremor, “is a package we put together using existing tools and parts that Ford already had.” The engine is paired with a six-speed automatic with manual shifting capabilities.

Available in two- and four-wheel drive, the F-150 Tremor comes with a 4.10 rear-axle with an electronic locking differential for extra traction. This sport truck takes its inspiration from the F-150’s FX appearance package and assigns it to a short-box regular cab. Bell noted that the truck will ride on matte black 20-inch rubber. Specifically, these are Pirelli Scorpions — P275/55R20 all-season tires.

Towing capability is always important to Ford truck buyers and the F-150 Tremor will not disappoint. The 4×2 model is rated to pull up to 8,000 pounds; the 4×4 model up to 7,700 pounds. It will also be available with a bedliner: drop-in or spray on — that’s your choice.

A number of participants queried Ford about its future plans for this model. Bell noted that no other engine options are being considered nor will an extended cab option be offered. No lowering kit will be offered, but if it is color choices that you want, then Ford will oblige buyers with seven to choose from: race red, blue flame, tuxedo black, sterling gray, ingot silver, oxford white and ruby red.

With the addition of the F-150 Tremor, Ford’s full-size truck line will now boast 11 sub-models. The Tremor will slot in around the middle of the pack, priced between the Lariat and FX4. You can get a look at the Tremor by tuning in to the NASCAR Camping World Truck Series Michigan National Guard 200 on Saturday, Aug. 17. The F-150 Tremor is the pace vehicle for this year’s race.