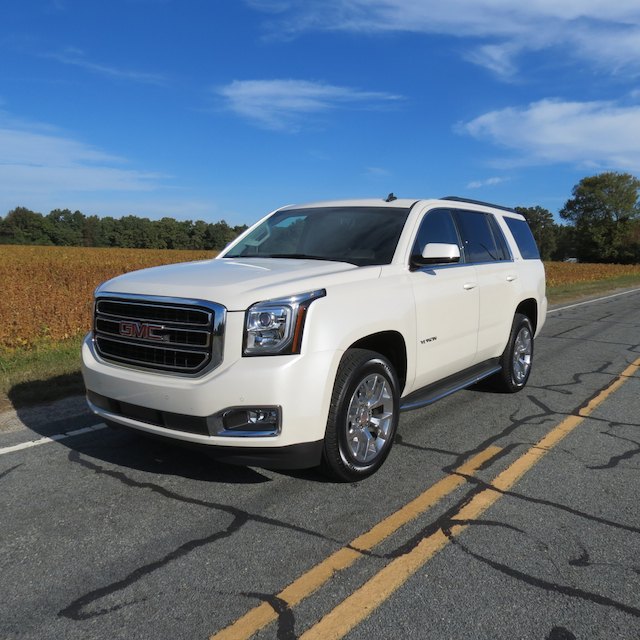 Oversized sport utility vehicles seem like a throwback to a different era for some. For those who own them or aspire to acquire one, these models deliver the best amalgamation of passenger room and trailering capabilities in the business. Fuel costs can be exorbitant, but with the prevailing price of gasoline dropping below $2 per gallon in most states, the appeal for such vehicles has increased once again.

The GMC Yukon is a full-size, traditional rear-wheel drive SUV, available in four-wheel-drive, standard and stretched (XL) wheelbases as well as in Denali trim. Consequently, shoppers have much to scrutinize when considering the Yukon line, a model that competes with the Ford Expedition, Toyota Sequoia and Nissan Armada. 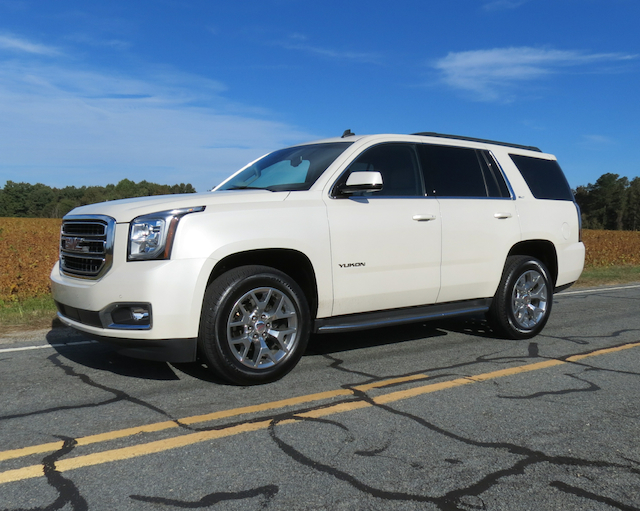 Fully redesigned for 2015, the current Yukon/Yukon Denali offers a familiar silhouette with a refreshed grille, new headlamps and LED lights, redesigned inlaid doors for improved aerodynamics, a modern family of wheels, laminated windshield and front door glass to boost quietness, and a standard rear spoiler. As always, the GMC Yukon is built on the same truck platform that underpins GM’s big pickup trucks, including the GMC Sierra. 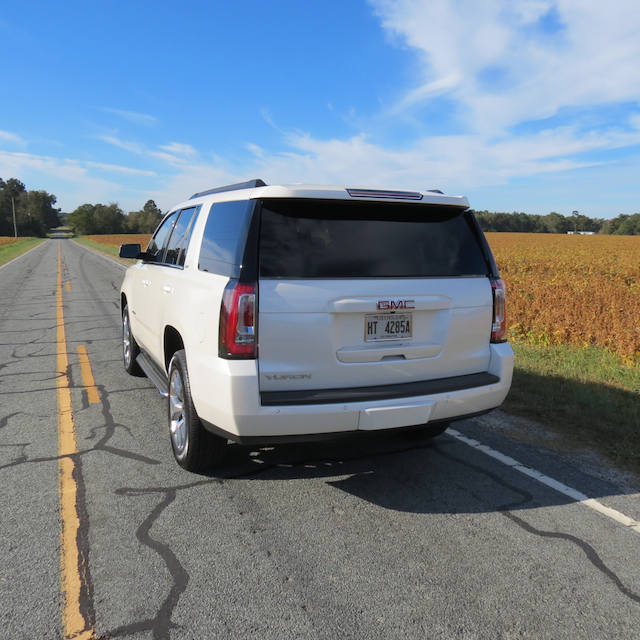 Inside, seating is for seven to nine people. The ideal arrangement may be two bucket seats up front, a pair of captain’s chairs in the second row and a third row bench seat. To offer room for nine, the second and third row seats are replaced with bench seats, but at a significant loss of storage space up front. The test model was a seven-seat SUV, what fully accentuates the cavernous interior.

The Yukon’s interior is dominated by an expansive dashboard, covered in soft touch materials and accented by French seam stitching. Excellent interior lighting, including ambient lighting, chases darkness away from every nook and crevice. All seats are firm and supportive, although third-row thigh support isn’t as good as you would find elsewhere. 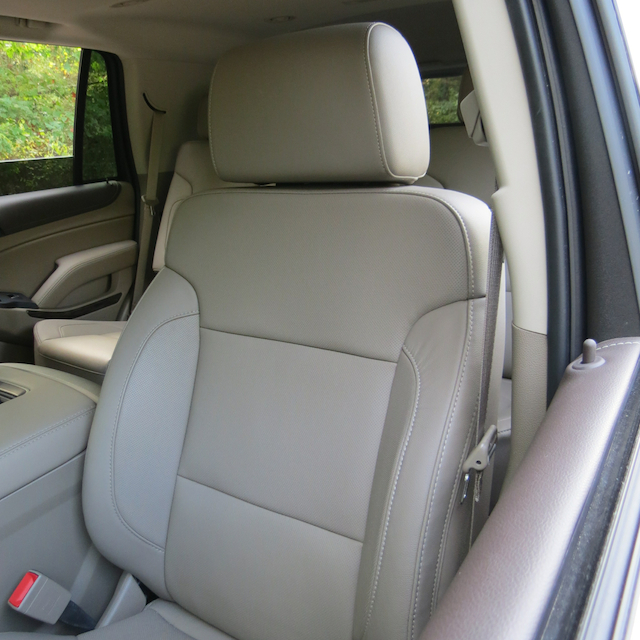 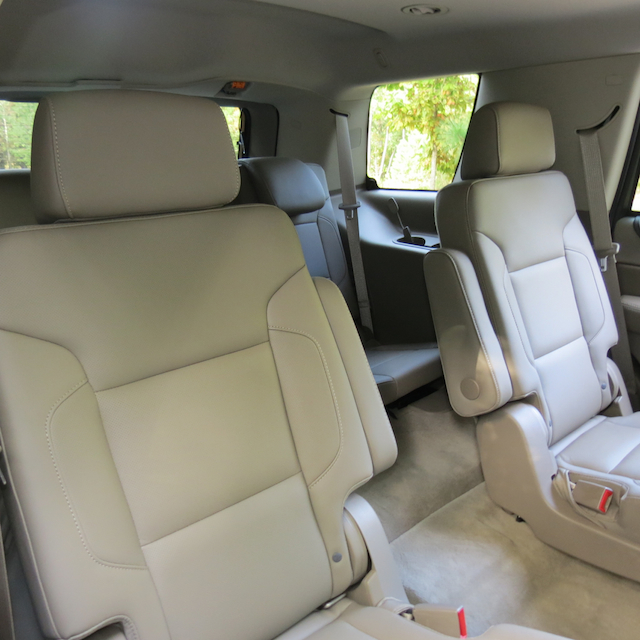 Move up to the SLT edition from the SLE and this model brings in improved interior lighting, heated and cooled front seats, heated outboard second row seats and a power folding 60-40 split bench seat. As for the Denali edition, this model brings in active noise cancellation technology, a customizable driver display and leather nearly everywhere. Available options include: an enhanced security package, an open road package with a power sunroof and navigation, a rear-seat Blu-Ray/DVD entertainment system, a head-up display and a number of dealer-installed accessories such as a reflective window shade.

Think hard before you consider swapping out the front bucket seats for a bench seat. Unless you know that you must have room for nine, the added seating space also means that the cavernous storage compartment and console between the front seats will be eliminated. Certainly, there are many other storage areas found in this model — the glove box, seat backs, the doors and behind the rear seat — but chances are you will find the bench arrangement wanting. 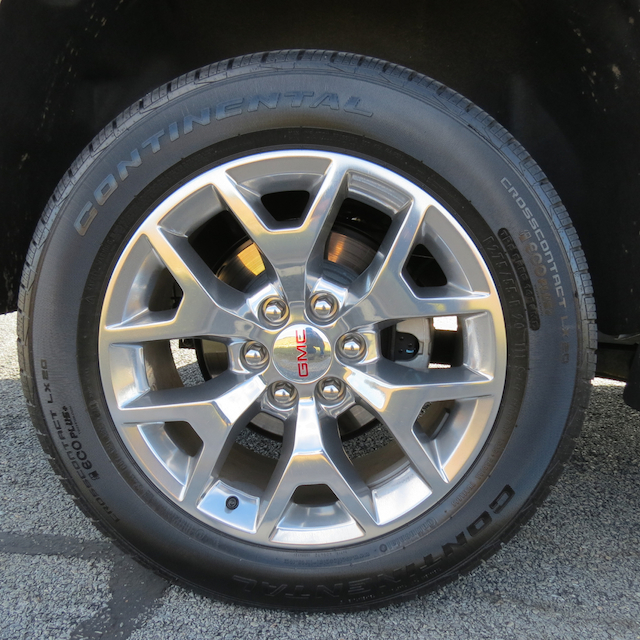 With no boat, camper or trailer to pull, I cannot comment on the Yukon’s towing capabilities. What I can tell you is that this model is rated to pull from 7,900 pounds (Yukon XL Denali 4WD) to 8,500 pounds (Yukon 2WD) and has a payload capacity that starts around 1,500 pounds and tops out at 1,676 pounds.

To put it another way, you can bring with you a full contingent of people, load up the rear storage area and pull that big boat without much effort. I’m basing my perspective strictly on anecdotal evidence, observing the many SUVs in my area that carry a full load and seem none the worse for it.

Get behind the wheel of any Yukon and you’ll sense that you have full command of the road. In many ways you do as ground clearance, its large tires and the SUV’s overall height make for one imposing model. 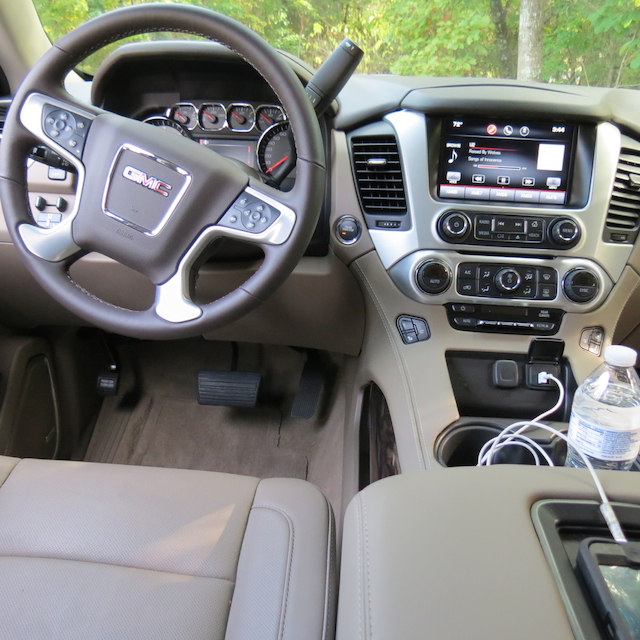 What I think will interest most shoppers is the difference between the two V-8 engines. Both provide generous amounts of power, but you will enjoy a near 20 percent boost in power by choosing the larger engine. I can see where that power would come in handy when pulling anything up a hill or even retrieving a large boat from the water.

The Yukon XL extends the standard wheelbase from 116 inches to 130 inches and overall length from 203.9 inches to 224 inches. That’s a different approach then, let’s say the Ford Expedition, where the extra space is consigned strictly behind the third row seat.

The XL’s extended proportions also means this model seems to float down the road. It handles well and makes U-turns without needing a third opposite flowing lane to make that maneuver. Involved driving? You won’t find it. Consume potholes with relative ease? The GMC Yukon does that. For the best suspension you’ll need to upgrade to the Denali as it comes outfitted with magnetic ride control, a suspension system used in the Corvette Stingray, Cadillac CTS and other premium GM vehicles. 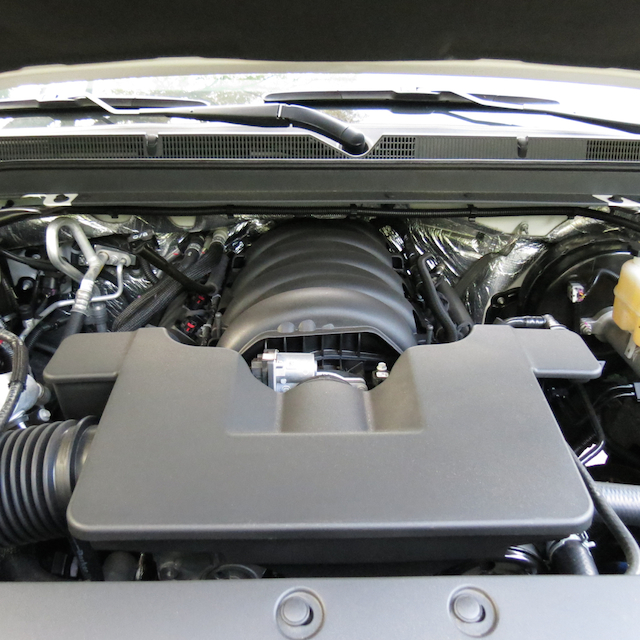 So how much does it cost to fill the tank of a GMC Yukon? Believe it or not, that’s a question that I often get from people that are considering a large SUV. Outfitted with a 31-gallon fuel tank, fill ups would have cost you well over $100 when the price of the regular grade gasoline it takes came in at $4 per gallon. Likewise, you will pay about $65 per fill up for a vehicle (as of this date) that averages 20 mpg under optimum driving conditions.

It is doubtful that gasoline prices will stay down for the long term, so keep that cost in mind when shopping for any large SUV. Moreover, you should expect to pay about $60,000 for a well-equipped standard wheelbase model outfitted with four-wheel drive and many of the amenities mentioned herein.