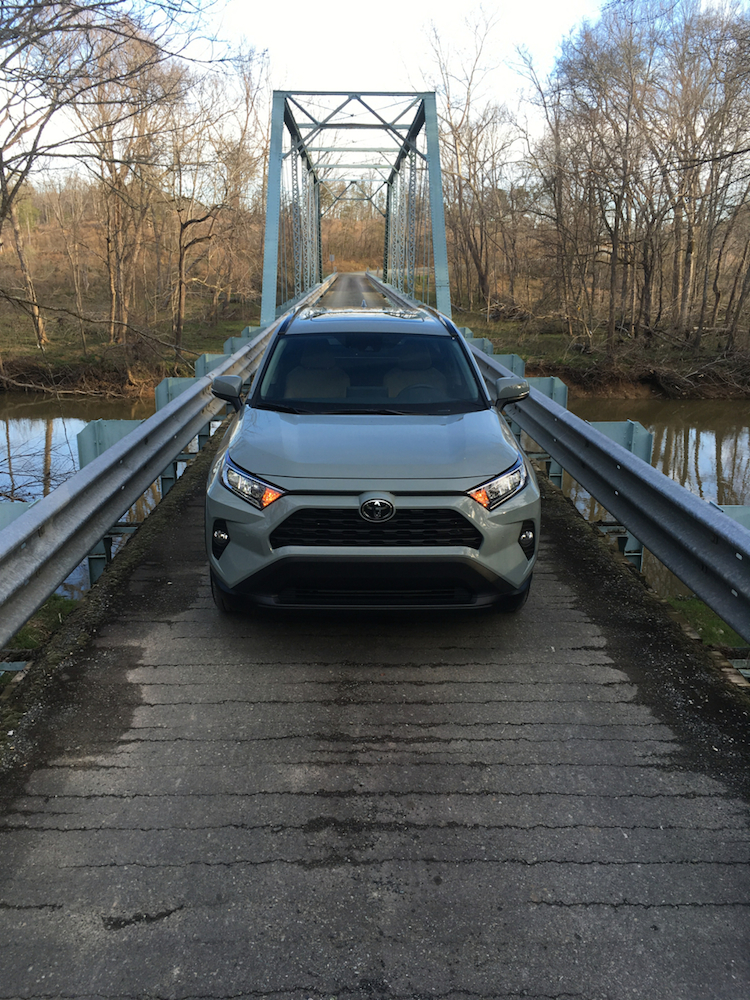 The 2019 Toyota RAV4 is a compact crossover utility vehicle with room for five. it comes with a four-cylinder engine, an 8-speed automatic transmission, and offers all-wheel drive. A hybrid variant is marketed separately.

Launched stateside in 1996, the RAV4 has gradually grown in size and importance. Indeed, it is now Toyota’s best-selling model, even surpassing sales of the midsize Camry sedan and the compact Corolla — intrepid models both.

For 2019, the RAV4 is all-new. It is based on Toyota’s latest global architecture and is slightly longer and wider than the preceding model.

As for the hybrid version, it arrives later this model year. You’ll find LE, XLE, and Limited trims.

We’ll cover over the various features offered. In the meantime, an assemblage of packages set these models apart beyond trim differences. For instance, the base LE model offers a blind spot monitor with rear cross-traffic alert for $590. Bundle it with the available tonneau cover and you’ll pay $680. 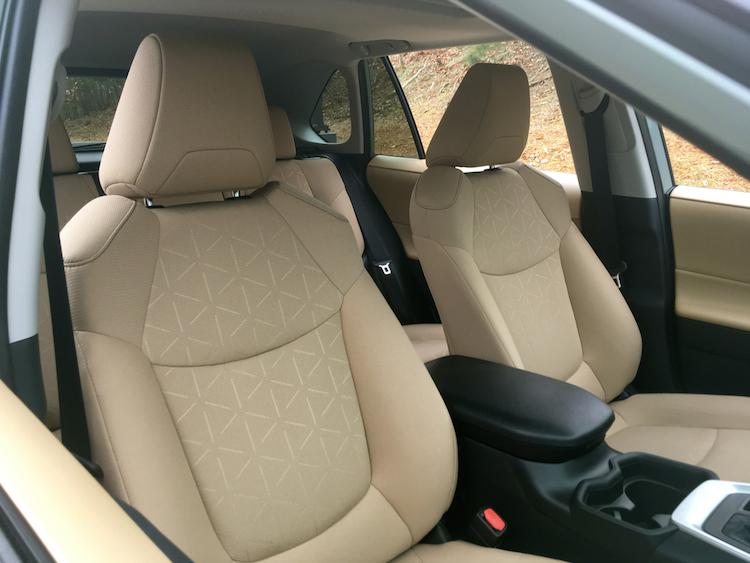 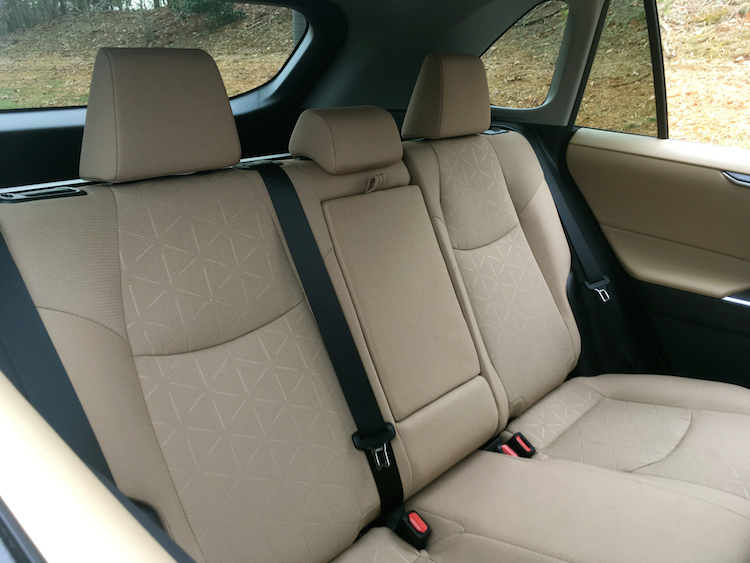 The mid-range XLE Premium trim offers the Entune 3.0 audio system with 11 speakers ($1,620). For $2,885, the package adds such driver-assist features as intelligent clearance sonar and rear cross-traffic braking. A digital rearview mirror with HomeLink and a Qi-compatible wireless smartphone charging round out the offering here.

The Adventure trim bundles the Entune system with navigation and an 11-speaker JBL audio system for $2,470. For $3,735, the package adds a power tilt-and-slide moonroof, and the driver-assist features found in the XLE Premium’s trim. 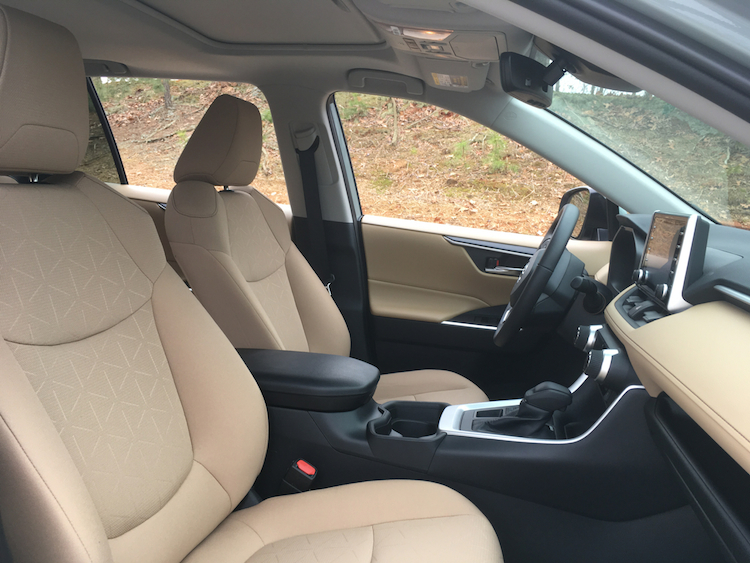 And now for an essential disclaimer. My wife and I have owned or leased a Toyota RAV4 for many years, beginning with the 2004 model, followed by the 2013 and 2017 versions. Needless to say, when our current lease ends in 2020, the RAV4 will be among the few models considered. My wife also likes the Nissan Rogue. As for me, I’d be happy to upgrade to the Toyota RAV4. The forthcoming Ford Bronco also has my attention.

As a RAV4 acolyte, it is easy to spot the changes from year to year as well as from generation to generation. Happily, the improvements with the fifth-generation RAV4 are more evolutionary than revolutionary, but they are quite evident nonetheless.

Among the standout exterior features include the front fascia with its gaping grille and fog lamp cutouts, squared wheel wells, and rear roof pillar — the last window cants forward, instead of backward. Lighting changes, updated wheels, and fresh signature lines are also present. 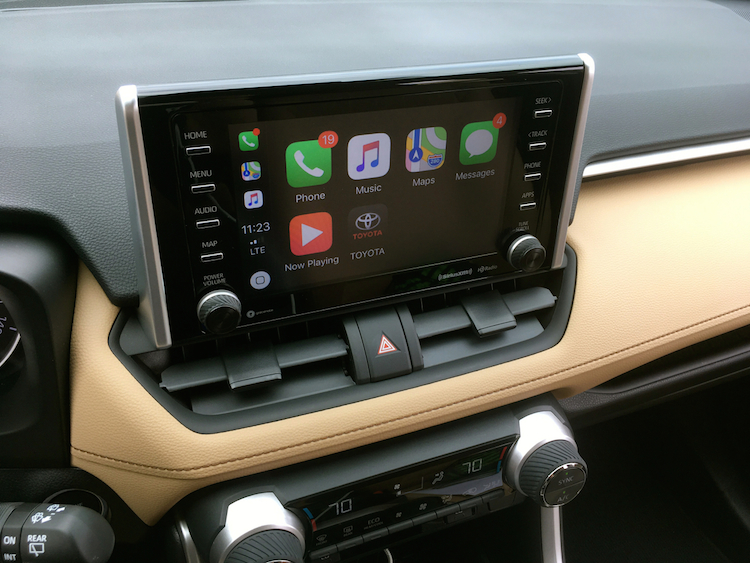 Inside, the cabin is slightly roomier than before. It offers sufficient room for five, although four is the ideal. We’ve witnessed the growing sophistication of this model down through the years and that’s something consumers should find pleasing.

Our test XLE Premium model featured ample soft-touch materials across the lower dashboard and door inlays. Splitting the upper and lower dash sections is chrome-like trim. The upper portion is sculpted plastic, but with ample creases and lines to add distinction.

One of the biggest changes involves the touchscreen display as it is bolted to the top of the center stack where the two dashboard sections meet. We like the look of the screen as well as its location.

Beneath the screen is the usual knob settings for managing the climate control system. At the base of the stack is a large open area for housing smartphones and making a connection. Switches for the automatic parking brake and hill hold are to the left of the transmission stick. 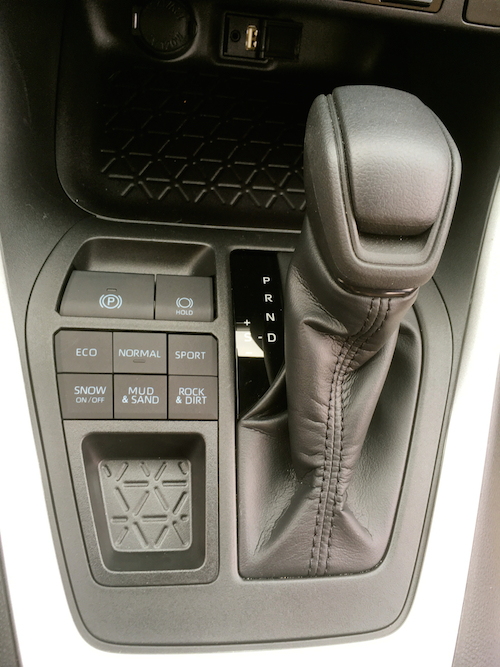 As for the seats, they’re trimmed in fabric on most models or dressed in SofTex, which is a brand of synthetic leather. Our test model had this material and we found it very comfortable and pleasing to the eye. An 8-way power driver’s seat is standard. The rear seat is a 60-40 split fold-down arrangement with a center armrest and two cup holders.

With a new model to show for it, the Toyota RAV4 will undergo the usual safety tests as conducted by the Insurance Institute for Highway Safety and the National Highway Traffic Safety Administration. Auto Trends prefers the IIHS’ tests as they’re more rigorous and detailed.

In any case, we expect the new model to achieve at least a Top Safety Pick rating from the IIHS and perhaps win its highly coveted “+” rating if this model’s advanced driver-assist features and available headlight upgrades pass muster. 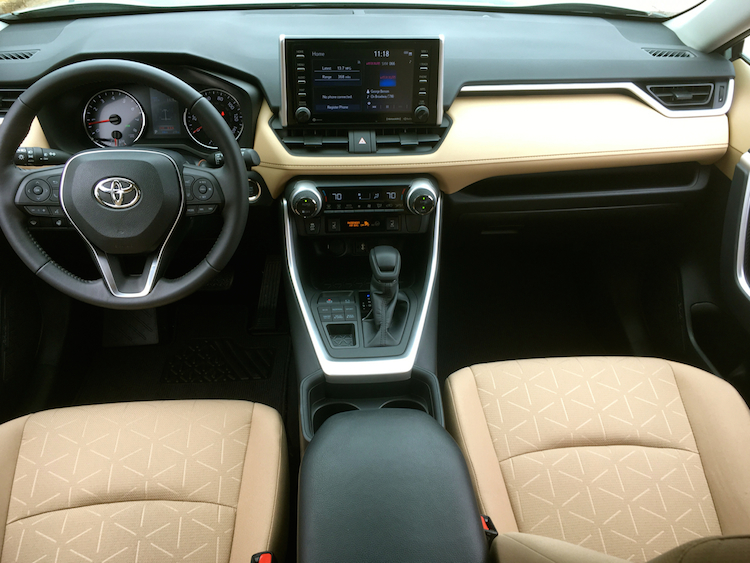 As for audio packages, the standard system includes a 7-inch touchscreen, six speakers, Bluetooth, Siri Eyes Free, Apple CarPlay smartphone compatibility, and four USB ports. Among the upgrades are an 8-inch touchscreen, HD Radio, up to 11 speakers, and navigation.

Another change Toyota made was upgrading from a six-speed automatic transmission to an eight-speed. What’s interesting about this combination is that it delivers more power and better efficiency to the RAV4. The previous front-wheel-drive model earned 23 mpg in the city and 29 mpg on the highway for a combined 25 mpg. This year, that same model earns 26/35/30 mpg. That’s a 5 mpg improvement. 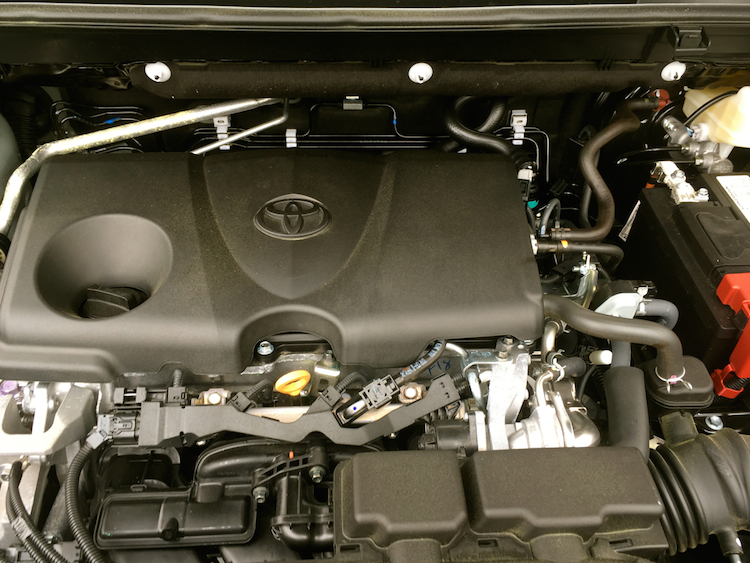 As for performance, the RAV4 delivers adequate step-off power and decent passing power. Under a full load, the engine has its work cut out for it, but it doesn’t lag. The new transmission shifts smoothly between gears. No hunting was felt or observed. This SUV’s steering provides a level of connectivity we like and it handles well.

With available all-wheel drive, you’ll find the system does an admirable job of shifting power from front to back as well as from side to side. Beginning at the Adventure trim, the system employs torque vectoring, which transfers power to the wheels with the most traction. This system will cost you about 2 mpg, however.

Concerning ride comfort, the RAV4 matches the segment leaders. The cabin, though, isn’t the quietest in the segment. In fact, under hard acceleration, you’ll hear the engine. That’s fine for a V8, but not so much for a conventional four-pot.

The Toyota RAV4 has a lot going for it. The new design, upgraded powertrain, and advanced safety technologies keep it competitive in a dynamic segment. Moreover, we’re glad that Apple CarPlay smartphone compatibility is finally here. Unfortunately, Google Android Auto fans will have to wait at least another year for integration.

We rarely recommend the base model for any vehicle. And this holds true for the RAV4. You might start your search with the XLE trim, but we think you’d be in a better position to consider the XLE Premium as it offers superior bang for the buck. We always recommend all-wheel drive for anyone living in the northern states or wherever wintry conditions take hold. As for the hybrid, its late arrival may yet supply a justifiable alternative, especially if the price discrepancy between the standard and hybrid models is under $2,000.

All in all, the 2019 Toyota RAV4 does what it needs to do and better. It supplies a viable alternative to the Corolla and Camry, and fits nicely between the smaller C-HR and the midsize Highlander utility vehicles. 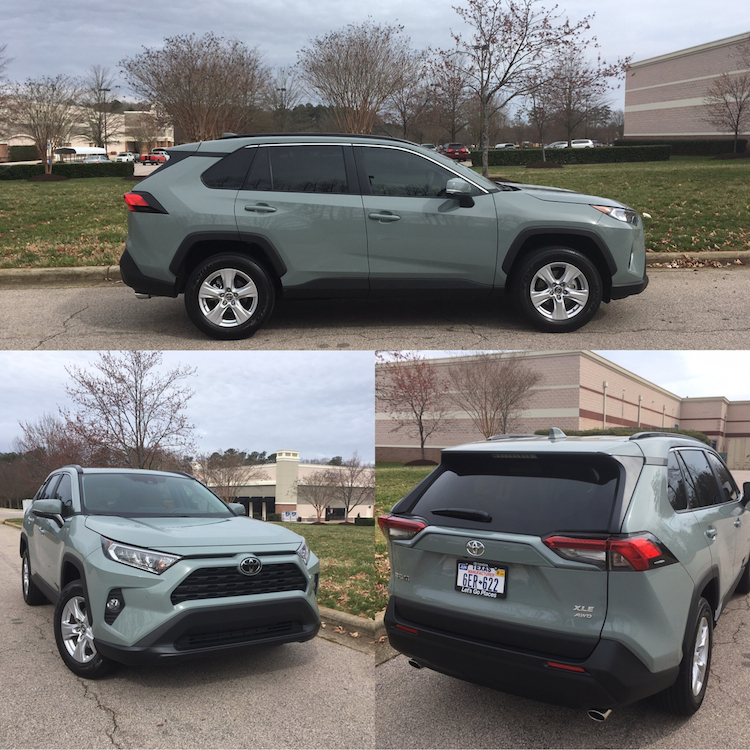 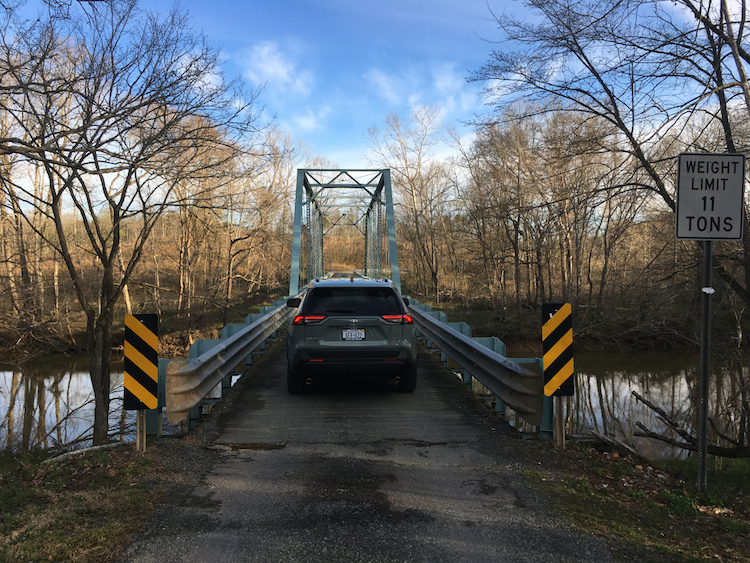