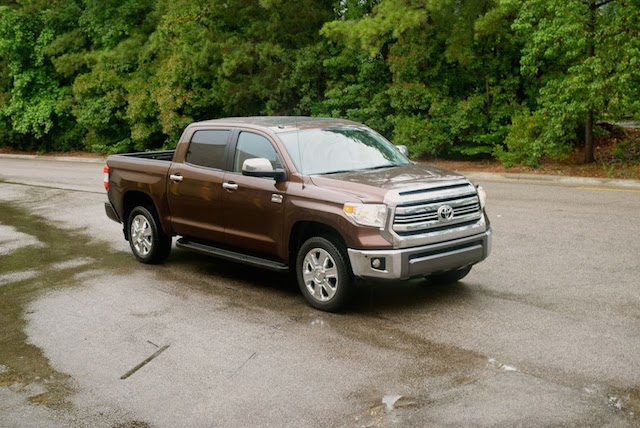 Behind the wheel of Toyota’s largest pickup truck.

How do you like your pickup truck — small, medium or large? Small pickup trucks are no longer sold in the US, having morphed into midsize trucks beginning about two decades ago. With the Ford Ranger’s retirement in 2011, consumers were left with a bevy of large models and then just two midsize trucks after the temporary discontinuation of the Chevrolet and GMC duo.

Although the midsize truck segment has rebounded — thanks in large part to the reintroduction of the Chevrolet Colorado and GMC Canyon — most consumers are still buying large. For Toyota, the full-size Tundra and the even better selling midsize Tacoma are offered, accounting for at least 300,000 sales annually in the US for the brand.

This writer has had ample behind-the-wheel time with both Toyota models and I must confess my personal preference is with the smaller truck. That’s no slight to the Tundra, but my pickup truck needs come in smaller and lighter.

Oh, for the return of the days when tiny trucks once defined the lower end of the market — compact 4x2s providing room for two and just enough payload capacity to carry a stove or to haul yard waste to the dump. You haven’t “trucked” until you have worked a 4-speed manual gearbox with a 2.4-liter, four-cylinder carbureted engine — what also presents an ideal way to learn how to row your own!

Meanwhile, in the large pickup truck arena the product choices include a generous selection of models for your consideration, including the Ford F-150, Chevrolet Silverado 1500, Ram 1500, GMC Sierra 1500, an all-new Nissan Titan, and the Toyota Tundra.

The Tundra name has been around since 2000 when it replaced the earlier T-100. The original Tundra is nearly the same size as the current Tacoma before it transmuted in 2007 to its current footprint, to match what the Detroit manufacturers were offering.

The current-generation Toyota Tundra was released in 2014, offering an evolutionary update to the previous model. As before, customers have 4×2 and 4×4 options; three bed sizes; two V-8 engine choices; as well as regular, double, and CrewMax cabins.

With the current-generation model, Toyota also expanded the Tundra’s trim levels to include SR, SR5, Limited, TRD Pro, Platinum, and 1794 editions. A 2016 Toyota Tundra CrewMax 4×4 1794 Edition was a recent weekly driver, a western-themed conveyance and style also popular among the competing manufacturers. Both the Platinum and 1794 Edition share top billing and prices, and are offered with the CrewMax only.

The Platinum has a more conventional luxury presence with it, while the 1794 showcases its take on luxury with distinct badging, a massive 38-gallon fuel tank (up from the standard 26.4 gallons), a western-themed interior with brown premium perforated leather-trimmed seats, unique floor mats, and still more badging.

So, how did Toyota settle on the 1794 name and what does it mean? Well, 1794 marks the year when one Juan Ignacio de Casanova left the Canary Islands (Spain) and settled in what is now the state of Texas. Señor de Casanova acquired rolling pasture land south of San Antonio, built the JLR Ranch, with that property remaining in his family for more than two centuries before Toyota acquired 2,600 of the 4,000 acres still owned by his descendants.

Regardless of which CrewMax model you choose, you’ll find a cavernous interior with room for five adults. Up front are two of the plushest bucket seats you’ll find in this segment — the driver gets a 12-way power operated recliner. In the rear is a 60-40 split-folding bench seat with the seats folding up instead of flat. Just imagine the interior storage possibilities available with this arrangement.

As for the trim level, call it premium — while there is leather everywhere, there are soft touch materials across the top of the dashboard, surrounding the center console, and on the doors — standard Toyota fare with the soft leather expression paralleling what you might find in a Lexus.

Another luxury touch is the steering wheel — wood with leather grips. Behind that is the instrument panel with two large and two small analog displays, with a digital driver information center hemmed in.

Just above the center stack is an open storage compartment, more than sufficiently sized to hold your smart phone or other small device. The center stack is dominated by a 6.1- or available 7-inch color touchscreen display where the automaker’s Entune telematics system is accessed. It is easy to read and is enhanced with a premium JBL audio system with integrated navigation and an app suite. Buttons and switches are at the ready too.

Unlike competing manufacturers, Toyota doesn’t offer a V-6 engine in the Tundra. That’s not a bad decision because no V-6 can handle what is required of it unless performance boosting is offered, such as turbocharging. The fuel economy advantage of the smaller engines is negligible — expect to average 15 mpg at best regardless of your engine choice. I averaged 14.9 mpg for the week I had the Tundra.

The larger V-8 delivers ample power throughout the band curve, especially noticeable when picking up speed on a highway entrance ramp. A standard 4.10 differential ratio gives way to a 4.30 ratio with the available tow package, enabling this truck to pull up to 9,800 pounds.

My off-road time was limited to covering a winding, hilly three-quarter mile dirt road coming and going. It was enough to demonstrate to me that the Tundra 4×4 tackles the toughest terrain with authority, pushing through the washed out areas with ease. Bumpy ride yes, uncomfortable no. Today’s trucks can take a beating while delivering a reasonable level of cabin comfort along the way.

You’ll find the off-road and trailer controls to the lower right of the steering wheel. Switching from 4×2 to 4×4 high takes just a few seconds for the adjustment to kick in. And if you’re stuck in a muck, 4×4 low is at the ready. Sorry, no “crawl control” feature along the lines of the Tacoma is available in any Tundra model.

Payload comes in around 1,500 pounds, therefore if your human cargo collectively adds 1,000 pounds you still have 500 pounds of truck bed capacity to carry wood, bricks, concrete, and the like. This truck comes with a deck rail system with four adjustable tie-down cleats. An easy drop lift gate is present. The only thing I would like to see changed is the inclusion of step bumpers along the lines of the Chevrolet Silverado for ease of access to the bed.

Toyota’s Tundra sizes up well against the competition. It doesn’t have the seemingly infinite number of build considerations of the F-150 and the other Detroit models, but it offers enough choices to satisfy most pickup truck buyers. On the other hand, no heavy-duty version is available.

Perhaps the most significant challenge to the Tundra comes from within — the Tacoma is such a strong and capable player that the Tundra is likely overlooked by some Toyota shoppers. But that’s still a win for Toyota and its effort to support a healthy slice of the pickup truck market.