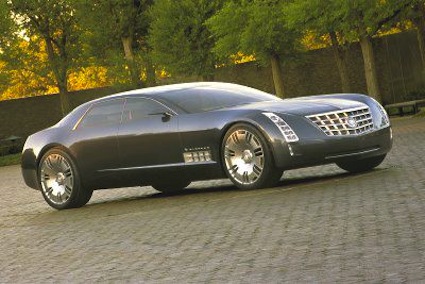 Cadillac has served up a cluster of concept vehicles over the past decade including handsome full-size models that have hinted at brand greatness. The Cadillac Sixteen was presented in 2003, an outrageously over-the-top performance machine outfitted with a V-16 engine. In 2011 the handsome Cadillac Ciel rolled out and just this past week we got a glimpse at the inspiring Cadillac Elmiraj.

All three models have teased Cadillac faithful, pointing to possible future glory, but with scant commitment from GM management that we will ever see these vehicles or anything closely related to them in Cadillac showrooms.

Certainly, GM has followed through and brought several Cadillac concepts to the market. The upcoming ELR, the current CTS coupe and even the Cadillac XTS were based on concept models. But, when it comes to either a halo model or a true flagship to take on the BMW 7 Series, the Mercedes Benz S-Class or the Audi A8, GMs commitment just isn’t there. At least not yet.

In 2003, the Cadillac Sixteen concept was introduced, a four-door hardtop with an all-glass roof. Its long hood, 24-inch wheels and sharp Art & Science design cues stunned the automotive world and had journalists and enthusiasts gushing praise.

The Cadillac Sixteen was the work of GM design chief Wayne Cherry and was supported by Bob Lutz, then GMs vice chairman. Under the hood was a working 13.6-liter V-16 engine making 1,000 horsepower and 1,000 foot-pounds of torque. Lutz wanted the Sixteen produced, in a bid to help Cadillac reclaim the standard of the world moniker it had held decades earlier. He expected approximately 350 to be built annually, selling for upwards of $300,000 a piece according to Autoweek.

But, the Sixteen never saw production as GMs financial guys refused to fund the project. However, some of the sedans styling cues have made it to other products including the Cadillac CTS. Interestingly, the Cadillac Sixteen concept continues to show up at automotive events around the country, including at the 2013 Amelia Island Concours dElegance. For some reason, GM wont let its original aspirations die even if the concept is now more than a decade old.

In 2011, GM again stunned the automotive world by introducing the Cadillac Ciel at the 2011 Pebble Beach Concours d’Elegance. Ciel is French for sky and this four-door convertible is all about bringing the outside to the interior opulence and comfort of a large, 2+2 coupe.

Unlike the Cadillac Sixteen, the Cadillac Ciel used an engine that is now in production: a twin turbo 3.6-liter V-6. It was also one part of a hybrid system, with a lithium-ion battery storing electricity. Thus, while the Sixteen would have consumed much fuel, the Ciel is as close to doing the opposite, and might do so without losing its large presence and its over-the-top appeal. Notably, eight years have separated the release of these two concepts, reflecting the increased emphasis on fuel efficiency prized by consumers today.

The 425-hp Cadillac Ciel Concept sits on a 125-inch wheelbase and features rear-hinged rear doors. Inside, the cabin is graced with Italian Olive wood, machined aluminum and generous amounts of leather. Other standout features include a floating center console with a built-in humidor, multiple connectivity ports and 22-inch wheels.

The third tease in this concept set is the Cadillac Elmiraj, itself a Pebble Beach Concours dElegance debutante, following the Ciel by two years. The closeness of the Ciel and Elmiraj debuts has sent tongues wagging about Cadillac’s top-of-the-range product plans, something we will address later.

The Cadillac Elmiraj has been described by GM as a grand coupe and that appellation seems appropriate. Its long hood, sleek body lines and raised rear deck sit on 22-inch aluminum wheels. The hood vents are functional, useful for dispensing the heat generated by the 4.5-liter twin turbo V-8 500-hp engine that powers this rear-wheel drive sedan.

Inside, the Elmiraj features custom leather, Brazilian Rosewood and titanium trim. A 10-inch navigation and connectivity touchscreen panel can be concealed within the dashboard. All four seating places tilt forward and recline.

In July 2012 Auto Trends reported that GM had approved Cadillacs flagship model, dubbed Omega, with the intent to bring this model to the market in 2015. Later reports claimed that the project was canceled, but in July 2013 USA Today confirmed that a Cadillac model will slot above the XTS, currently the brands largest model that isnt an SUV.

The new model will feature rear-wheel drive with all-wheel drive available. Perhaps the Cadillac Elmiraj, Ciel and Sixteen will inspire its design and maybe point to a limited-production model that could be sold in tandem with the new Cadillac.

Thrice teased, it appears that enthusiasts wont have long to wait for the big reveal. This is pure speculation, but the range-topping Cadillac could debut as soon as Nov. in Los Angeles, but most likely Jan. in Detroit at the North American International Auto Show.