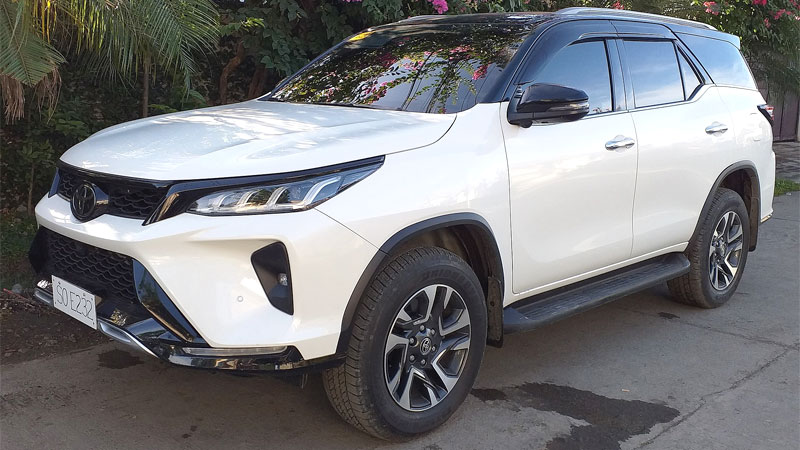 The Toyota Fortuner is a mid-size SUV built by this Japanese brand since 2004. The Fortuner came to replace the highly successful 4Runner, as it was discontinued in most global markets (but not in the U.S. where it endures: Ed.).

Toyota did this to maintain its dominance in the mid-size SUV segment, and therefore, the company adopted a tried and tested approach. They crafted the Fortuner on the Toyota Hilux’s platform and gave it a sporty yet dominant appearance.

Fortunately, the Toyota Fortuner did sell in decent numbers in its first outing and numerous enthusiasts fell in love with it. The SUV is still in production today, with a fresh new look arriving in 2021. It seems that the Fortuner is here to stay, and Toyota is intent on keeping it in the mix for a long time to come.

Since the Toyota Fortuner came at a time when the automotive world was transitioning towards futuristic designs, the company was able to give the vehicle a unique appearance.

The first-generation Fortuner looked a bit like the Hilux, the truck on which it is based, especially when you look closely at the headlights and the side profile. The front grille and the bumper also resembled that of the Hilux.

But overall, the front end could be called a mixture of both the Hilux and the Land Cruiser Prado. The story at the back was a bit different, with the fresh new taillights and redesigned liftgate completing the look.

The first-generation Fortuner isn’t the most beautiful vehicle in its segment. Some people even argue that it is one of the ugliest SUVs of its time, but we leave that decision up to you. No matter what people said, Toyota stuck with the design and went for a facelift by 2008. However, they soon topped that up with another facelift in 2011.

The 2011 facelift proved to be fruitful as the Fortuner started looking a bit different from the other Toyota models. Finally, the Japanese automaker made a significant leap and, in 2015, introduced the second-generation Fortuner. Needless to say, Toyota learned from the criticism and produced a praiseworthy SUV.

The Toyota Fortuner comes with a 5-door configuration, and it can seat seven people. However, the foldable third-row seats are only sufficient for children rather than full-sized adults. You won’t have any problems in the front row or the second row concerning comfort. The SUV comes with soft seats that provide comfort and support when off-roading.

The initial generation came with several engine options, including the 2.7-liter 2TR-FE and 2TR-FBE inline-4. Other than that, a powerful 4.0-liter V6 was also offered. In the diesel department, Toyota offered the 2.5-liter 2KD-FTV, the 3.0-liter turbocharged 1KD-FTV, and the 3.0-liter 5L-E.

All the engines offered immense performance and proved enough on and off the road. That success was due to the four-wheel-drive option and the sturdy 5-speed automatic/manual transmission.

The story changed only slightly in the second generation. Toyota kept the gasoline engines the same, but they expanded the diesel variants. This time, they brought a 2.4-liter diesel and a 2.8-liter diesel, along with the others previously offered. The new engines diversified the Fortuner’s position and allowed buyers to choose the best alternative.

When it comes to a vehicle made by Toyota, you can expect the best in terms of handling and performance. The Japanese marque does not hold back on excellence, and it shows in its products. The Toyota Fortuner has ample power to navigate the roads and enough juice to conquer the occasional off-road experience.

Keep in mind that the SUV isn’t tailor-made for an off-road experience. If you want that, you would need to raise its height, add better suspension, and install a chassis protection kit to be safe. The Fortuner won’t mind a slight adventure, a family picnic in the mountains, or a fishing trip near the lake.

The vehicle is made as a comfortable SUV. So, you are better off driving it as your daily. And if you have a large family, perhaps as a family car. No matter what you choose, the Toyota Fortuner will not disappoint.

Toyota doesn’t offer the Fortuner in the U.S market given the 4Runner’s presence. Everywhere else it is available, the Toyota Fortuner makes up in reliability for what it loses in other departments.

It might not be overly flashy or overly powerful, but it sure is reliable and durable. You can count on it no matter your situation, which is an admirable quality in any vehicle.

See Also – What is the Suzuki Alto?