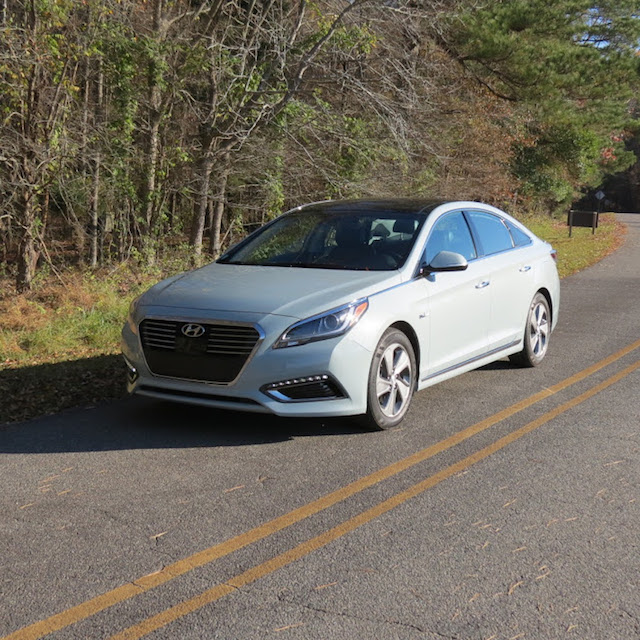 Hyundai rolls out the second iteration of its only hybrid model. For 2016, a plug-in variant is also offered.

Unless your name is Toyota, sticking with hybrids can seem like a losing proposition. Indeed, Toyota outsells all manufacturers combined by a 2-to-1 margin and that leaves the remaining companies to do battle for a share of the shrinking2233 vehicle electrification pie.

Blame much lower fuel prices for hamstringing hybrid sales. And with current prices below $2 per gallon in most states, consumers know that they’ll never recoup their investment unless the manufacturer offers them stepped up incentives.

Hyundai, like many other Toyota competitors, must continue with hybrids to meet ever more stringent federal fuel economy standards. Hyundai may be a in a better position than most major manufacturers as it doesn’t have pickup trucks and full-size SUVs to skew its fuel economy ratings. Still, like every other manufacturer, they’ll need both standard and plug-in hybrid electric vehicles to reach the 54.5 mpg average come 2025.

Over the past 30 months, I’ve had five Hyundai Sonata models to test drive. The first and most recent models were the Sonata Hybrid Limited, the top-end edition of this electrified midsize sedan.

The 2016 hybrid is based on the seventh-generation Sonata, released in 2015. As is sometimes customary, Hyundai waited a full model year to bring out the new hybrid model. This approach gave Hyundai the opportunity to refine its new hybrid as well as draw extra attention to the model. And for the first time, the standard hybrid is now joined by a plug-in hybrid electric vehicle (PHEV), a trend most manufacturers are embracing.

As before, there are some important styling differences between the gasoline and hybrid models, especially as found in the front and rear fascias. Those changes are mostly functional, which enables the hybrid to tie the pure electric Tesla Model S in the coefficient of drag with both vehicles coming in at 0.24.

Inside, the Sonata Hybrid offers one of the largest cabins in its class. Notably, the cabin size is so large that the EPA rates this sedan as a “full size” model. And you still have the larger Azera, Genesis and Equus to consider!

The cabin is smartly and elegantly laid out with all controls at the ready and easy to decipher. I especially appreciated the uncluttered center console with its easy-to-read navigation screen on top, followed by knobs and switches to operate the audio and climate control systems.

At the base of the console is a covered compartment, where two USB ports, a 12-volt outlet, and an auxiliary input port are present. A dedicated smartphone cubby sits in front of the compartment for easy connectivity. The transmission shifter, electronic parking brake, two cup holders and a covered storage compartment split the front seats. Each door comes with storage pockets and cup holders; two additional cup holders are in the rear middle seat position.

Driver comfort was never an issue with this hybrid as sufficient bolstering and lumbar support does the trick. The back seat is especially roomy and can fit three adults with ease. That’s an advantage Hyundai has over most of its competitors and something that shouldn’t be overlooked. It probably also explains why the only slightly larger, but more expensive Azera doesn’t sell well — it simply isn’t necessary.

Start the ignition and you’ll be met by dead silence. Prepare to roll away from a stop on electric power, something that can be maintained at speeds of up to 74 mph. But don’t worry: when you need full power, the engine kicks in. Importantly, both the engine and the electric battery pack will send power to the front wheels together from time to time, especially when you enter a highway or ascend a hill.

You’ll have proof of that dual power too, found smack dab in the middle of the instrument panel. That’s where you’ll find the energy flow meter, but you have to look for it. Simply adjust the info controls on the steering wheel and you’ll find the meter. What’s especially welcome here is that the meter shows you exactly what is taking place when you drive.

It’s one of the more helpful gauges present, although on the left side of the instrument panel you have additional EV information to consider. In all, I managed to average 39 mpg — an outstanding number considering my lead foot and the cold morning temperatures that always adversely impact any EV’s fuel economy.