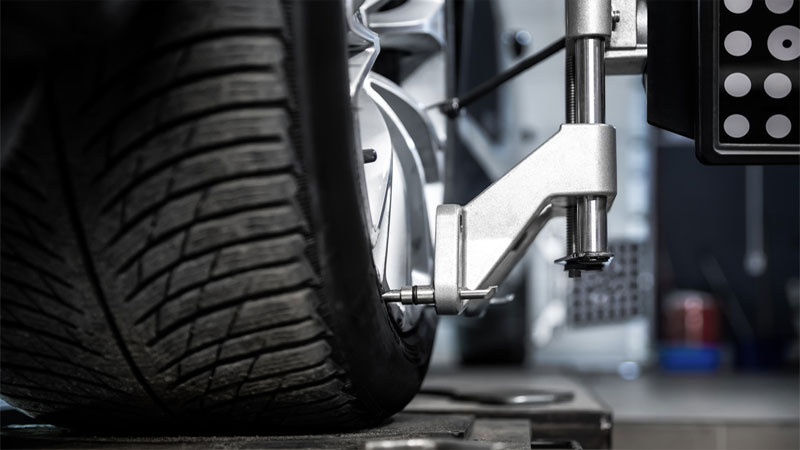 Though most are familiar with the concept of front-end toe, far fewer can differentiate between other forms of alignment-related adjustment. Aside from “toe”, most vehicles feature adjustable caster and camber settings as well. Of these two remaining adjustments, camber is the most critical to overall tire wear.

A vehicle’s camber is typically analyzed during the course of a front-end alignment and is adjusted as needed. Extreme positive camber, as well as extremely negative camber, can wear a vehicle’s tires at an extremely quick rate, while also negatively impacting vehicle handling.

Read on to learn more about the importance of front end camber, as well as the front-end alignment process as a whole.

Related – How Much Does an Alignment Cost?

The term “caster” refers to the forward or rearward lean of a vehicle’s steering/suspension components, in relation to its point of intersection with each wheel ends hub. This differs from a vehicle’s camber settings, which dictate the inward/outward angle of a tire’s upper quadrant, in relation to the vehicle’s chassis.

Correctly adjusted caster causes a vehicle’s wheels to naturally recenter after all steering effort has been removed from a vehicle’s steering wheel. This greatly reduces the amount of input that is required upon a driver’s behalf, to prevent unnecessary wander.

Do All Cars Have Camber?

All vehicles feature some degree of camber, even if such angles are not independently adjustable. Camber plays a pivotal role in establishing the way a vehicle handles, as well as the manner in which a vehicle’s tires wear. Without a defined camber angle, a vehicle would suffer a number of largely detrimental effects.

While it is true that some vehicles feature 0-degree, or static camber adjustments, most exhibit slightly negative camber from the factory. This positively impacts a vehicle’s cornering capabilities and enhances tread-to-road surface contact under a variety of conditions.

However, some vehicles are also issued from the factory with a certain degree of positive camber.

The vast majority of vehicles on the road today exhibit a certain degree of negative camber. This, of course, is for good reason, as such front-end geometry allows for better handling and increased cornering capabilities. In turn, this prevents understeer when attempting to negotiate moderately tight turns at speed.

However, excessively negative camber can also have its own set of undesirable effects. If outside of specification, negative camber can cause a certain degree of oversteer, while also causing a vehicle to dart inline with imperfections in the pavement. Additionally, a camber of this type can cause the inside shoulder of a tire to wear exceedingly quickly.

Though positive camber can be found on a limited number of on-road vehicles, such camber adjustments are typically reserved for off-road equipment, such as tractors.

Too much camber of a positive degree can cause a vehicle to wander, and to be difficult to hold within one’s lane of travel.

Camber of this type can also cause a vehicle’s front tires to wear exceedingly fast on their outside edges. This can prove problematic, as excessive shoulder wear can dramatically reduce a tire’s useful service life.

How is Camber Adjusted?

A vehicle’s camber settings are adjusted in conjunction with a specialized lift, known as an alignment rack. This rack uses a computer interface to take a series of measurements, all of which are factored in to provide a technician with valuable insight for proper adjustment.

Before beginning the alignment process itself, all steering and suspension components should be checked for excessive wear, in a bid to prevent inadvertent misalignment.

The manner in which camber is adjusted differs based on the general design of a vehicle’s front end. However, the alignment process itself generally involves manipulating one or more types of adjusters, to gain the desired results.

The most common of all camber-related adjustment devices include eccentric washer bolts, cam bolts, and turn-buckle joints. Alternatively, some vehicles require the adjustment of strut-mounted shims.

The alignment procedure will conclude only after the data displayed on an alignment rack’s monitor reflects acceptable values. This information is recorded via a digital camera, which senses the reflection of infrared beams aimed at a series of wheel-mounted optical reflectors.

1 thought on “What Is Camber On a Car? (Positive vs Negative Effects)”