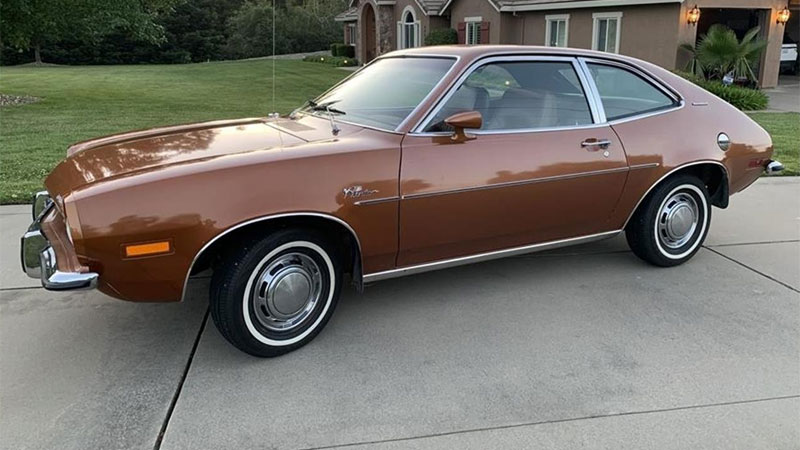 It was during the 1970s when automakers from Japan began to find a market among the big American cars of that era. As Toyota, Honda and Datsun (later Nissan) products began to take hold, American car manufacturers responded by producing several smaller models to counter the overseas invasion.

Unfortunately, many of those products were duds as manufacturers were not able to replicate the success that they had with big cars and translate it into compact and smaller models. Five models from that era have been largely forgotten, vehicles that sullied the reputation of American manufacturers.

Ford’s first major foray into the subcompact car class was a bomb. Literally. The Ford Pinto went on sale in 1971 and stayed on the market for 10 years. Despite selling more than 3 million units over its history and also yielding a Mercury Bobcat variant, the Pinto became synonymous with fiery explosions.

Sold in hatchback, coupe, and wagon configurations, the Ford Pinto had a serious design flaw, one that could ignite the car if it was hit from behind. Specifically, the structural design of the fuel tank filler neck was discovered to break off when the car was rear-ended. Deadly fires were the result.

Worse, was the revelation of an internal memo that revealed Ford knew about the defect, but had weighed the $11 cost of repair per car against the cost of legal settlements. It took the work of the independent Mother Jones magazine to shed light on the problem and hasten the Pinto’s demise.

The same year that Ford rolled out the Pinto, Chevrolet introduced the Vega. It, too, was available in coupe, wagon, and station wagon body styles, a subcompact that stayed in production for eight years. Quality problems dogged the Vega and ultimately led to the model’s end after nearly 2 million units were produced.

Among the chief problems with the Chevrolet Vega were its aluminum engine as it buckled and leaked. Rust was another problem, which showed up in areas beneath the windshield, the door bottoms and rocker panels.

The heat was turned up on GM when consumer advocate Ralph Nader, head of the Center for Auto Safety, sent GM’s chairman a 12-page letter outlining the Vega’s problems calling the vehicle “sloppily crafted, unreliable and [an] unsafe vehicle.”

Nader pressured GM into backing its repaired engines with a five-year, 50,000-mile warranty, something the automaker later provided. Despite largely remedying the engine problems and countering the rust issues by upgrading to galvanized steel, the Vega was canceled as a result of sharply falling sales.

The Dodge Omni and twin Plymouth Horizon were introduced in 1978. These two front-wheel-drive models and their variants, including the Dodge Rampage stayed around until 1990 with nearly 1 million copies sold during that time.

Parent Chrysler Corporation tapped its European arm, Simca, to design the cars that were remarkably similar in appearance to the Volkswagen Rabbit that made its debut in 1974. Its initial engines were supplied by Volkswagen, but engine production limitations held demand in check.

An early review by Consumer Reports cast the Dodge Omni in a negative light, as it found that the car lost control in hard maneuvering. That “not acceptable” rating dogged Chrysler, but it did lead the automaker to make design modifications to the steering system.

To Chrysler’s credit, its first attempt at a subcompact car proved better than its American competitors, but the Dodge Omni and Plymouth Horizon are now largely forgotten.

The American Motors Corporation (AMC) was in a distant fourth place when it introduced its compact Pacer hatchback and station wagon in 1975. Its style was aerodynamic and rounded, a vehicle that was compared to the flying cars in the Jetsons cartoon.

Despite its futuristic look, the AMC Pacer had several contemporary problems that hindered its success.

For instance, a large amount of glass was used, including the wraparound rear quarter panels, which brought in much light. It also created much heat, necessitating the inclusion of air conditioning, then an option in most cars. It was also underpowered with its weak V6 engine struggling to move this “flying fishbowl.”

To make room for a V8 engine, AMC had to modify the hood to house the larger engine. Initially, AMC had planned to source a lighter weight Wankel rotary engine from GM to power the Pacer, but when GM canceled that program an archaic V6 was used instead.

Perhaps the Pacer would have turned out to be a memorable car had a rotary engine powered this car instead.

The Chevrolet Monza was based on the Chevy Vega platform, a model intended to compete with the Ford Mustang II, itself a larger variant based on the Pinto platform. The Chevy Monza, like the AMC Pacer, was designed with a Wankel rotary engine in mind.

But, when GM found that complying with stringent emissions requirements would be too costly, it dropped the engine. Still, production of the Monza was on and various four-, six-, and eight-cylinder engines were utilized.

The Chevy Monza lasted for six model years, debuting in 1975. It also spawned like models sold by other GM brands including the Buick Skyhawk, the Pontiac Sunbird, and the Oldsmobile Starfire.

The Monza reflected many of the quality problems that GM’s small cars of the 1970s had, namely ineffective suspension systems, missing screws, poor fit and finish, and rust.

Few and Far Between

Head to any car collector event and you’ll be hard-pressed to find any of the five mentioned cars among the 1970s classics. The Detroit automakers have since learned their lessons and are now building high-quality, small cars that help consumers forget the earlier models.