The second-generation Armada has sailed into port.

Among mainstream brands, the Nissan Armada, Toyota Sequoia, GMC Yukon, Chevrolet Tahoe, and the Ford Expedition are your choices. Of the five, the Armada is the newest name, but for several years, it was the oldest moniker in terms of product age.

That’s all changed now as the 2017 Nissan Armada is out, the second generation of this big eight-passenger SUV.

Derived From the Nissan Patrol

The first-generation model was built from 2004 to 2016 and was underpinned by the same platform powering the Nissan Titan pickup truck. The Titan itself is all-new for 2017, but this time Nissan didn’t turn to its big truck to develop the new Armada. Instead, Nissan cast its eyes on Japan, where another large SUV has long been built.

That model is none other than the Nissan Patrol, a name familiar to brand devotees, but not previously seen in North America, at least not in Nissan garb. The Infiniti QX80 is based on the Patrol, but dressed for a luxury market. 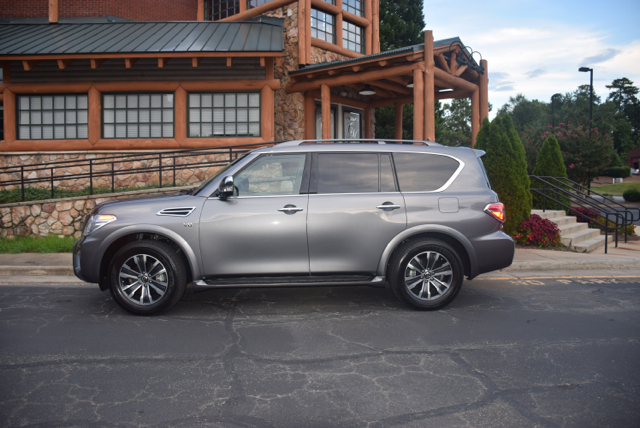 As for the Armada, Nissan went the same route as Infiniti, tapping the existing Patrol and modifying it for the North American market.

The result is a vehicle coming in two inches shorter between the wheels, but two inches longer overall. In addition, this model is about one inch wider and three inches shorter than the first-generation Armada. Thus, its overall dimensions are nearly the same and the current model, while new, should seem familiar to Armada owners.

The all-new Armada shares the same 5.6-liter, V8 gasoline engine found in the Titan and Titan XD. Known as “Endurance,” the engine is the same size as the previous V8, but otherwise it, too, is new. 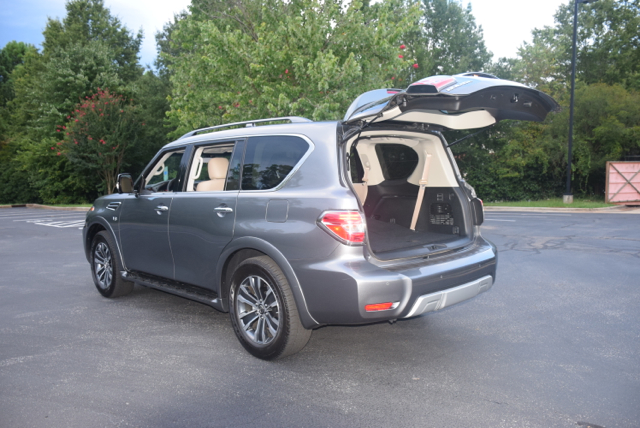 Without getting lost in the details, Nissan combined elements from its other vehicles to develop the new Armada’s exterior. To begin, the grille offers a familiar look, one advanced by the popular Pathfinder crossover. While the headlamp assembly is similar to the Titan’s, it offers its own look. The lower grille or air intake is unique, coming in wider and longer than the pickup truck line.

The truck’s frontal presentation is muscular, with a sculpted hood not unlike the Tita
n’s. So, what you have here is a combination of existing and new Nissan elements to establish the Armada’s face.

Front to back this SUV is burly. Nissan went easy on the profile creasing — instead, it focused on projecting a linear, but powerful stance. The roof and belt lines are even, with chrome and character line touches present. Distinct wheel arches, vent ports, and aluminum-alloy wheels provide further definition.

From the rear, you’ll find a massive liftgate with a spoiler, wraparound combination lamps, and chrome embellishments. You’ll also find front and rear skid plates across the model line. 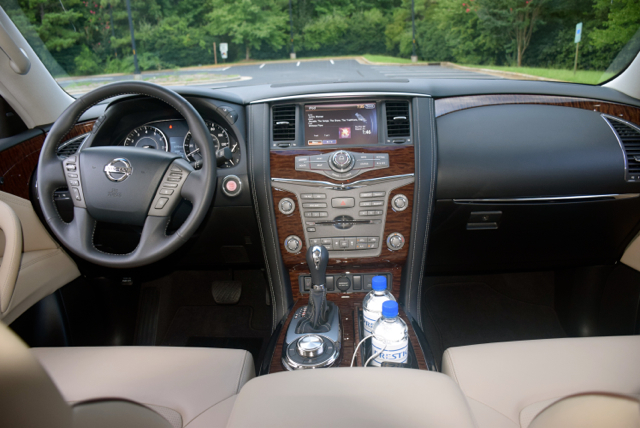 Thus, when fully loaded, your Platinum 4×4 will cost you $59,990. Nissan’s pricing is in line with what other manufacturers charge.

Slip behind the wheel of this SUV and you’ll immediately sense this model’s bigness. Although not directly related to the current Titan, there are some similarities in the way controls are located as well as the general open feeling you sense.

Nissan makes use of high-quality soft-touch materials through much of the cabin, but also weaves in ample amounts of leather, wood, and chrome touches. The instrument panel sits behind a thick leather-wrapped steering wheel and features a pair of analog displays — tachometer and speedometer — with the digital driver’s information center situated between the two.

The center stack is ordered by a color display at the top flanked by a pair of climate control vents. Immediately below that is a dial and switches for controlling the audio system. Beneath that additional switches and dials are present, for the climate control system and seat controls. A CD player is also present.

At the very base of the stack are the usual connection points — 12-volt outlets, USB, and auxiliary audio. Splitting the seats is the transmission shifter, the four-wheel drive dial, and two cupholders. Additional storage areas — open and covered — are also present. 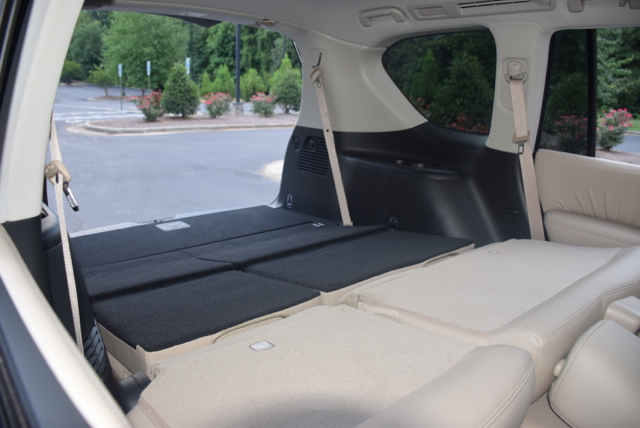 Nissan provides a well-equipped Armada, especially at the SL level on up. All models come with heated front seats. Although it was too hot outside to test them, I can confirm that the seats are otherwise plush and very supportive. Cooled or ventilated seats accompany the Platinum trim.

Wisely, Nissan provided second- and third-row seats befitting a big SUV. They move, tilt or otherwise drop down as needed. Both rows are very comfortable too and offer seating for three each. Legroom is a bit tight in the third row and you’l sit close together, but you can squeeze three people back there. The operative word here is “squeeze.”

Releasing an all-new engine to coincide with the debut of the new Armada was the correct move on Nissan’s part. Nissan has one V8 to work with across the Nissan and Infiniti lines, thus it needs to match up well against the likes of its competitors. Where Ford now relies on a twin-turbo V6 to power the Expedition, Nissan maintains a traditional approach.

And that approach is the right one as this SUV offers confident acceleration from a dead stop and keeps delivering power as you build speed. The seven-speed automatic transmission is matched well too, shifting seamlessly up and down the gear range. If you invest in a big SUV you expect it to provide ample power when carrying a full load or when towing. Certainly, the Armada’s 8,500-pound towing capacity should suit outdoors enthusiasts just fine.

On the steering front, the 2017 Armada moves with ease. At the same time, you will be reminded of the three tons of mass this SUV delivers as you turn corners or navigate twisty back roads. The 2017 Armada doesn’t pretend to encourage aggressive driving nor is it especially agile on curving roads — there is plenty of body roll and you’ll find yourself braking frequently the tighter the turns come. Braking is firm with moderate fade noted. Sizable vented disc brakes are at the corners.

One area that no manufacturer has yet to solve is fuel economy. Just like big pickup trucks, the Armada and friends gulp fuel. You’ll be hard-pressed to stay above 15 mpg, although my numbers pushed 17 mpg at times, thanks to nearly exclusive highway driving. The EPA rates this model at 13 mpg in the city and 18 mpg on the highway for a combined 15 mpg. That sounds about right. 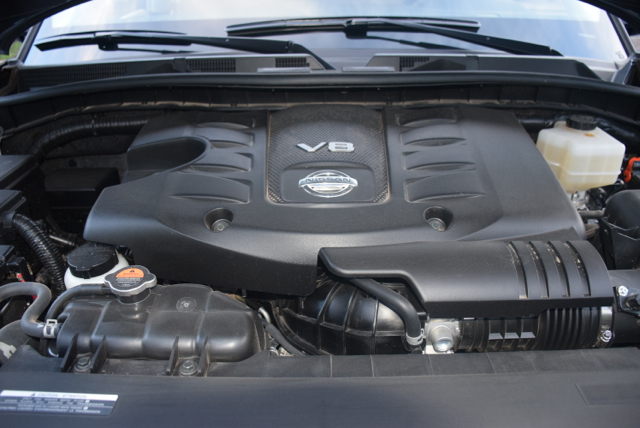 Twelve years was a long model run for the original Nissan Armada; there was no 2016 model. Generation two is here and what you have is a big SUV that is muscular, well-equipped, and offers similar dimensions as the previous model.

That said, shoppers who place a premium on passenger carrying ability may find the Nissan Quest minivan or the Nissan Pathfinder crossover more to their liking. But neither model has the pulling power of the Armada or the commanding presence that this SUV provides.