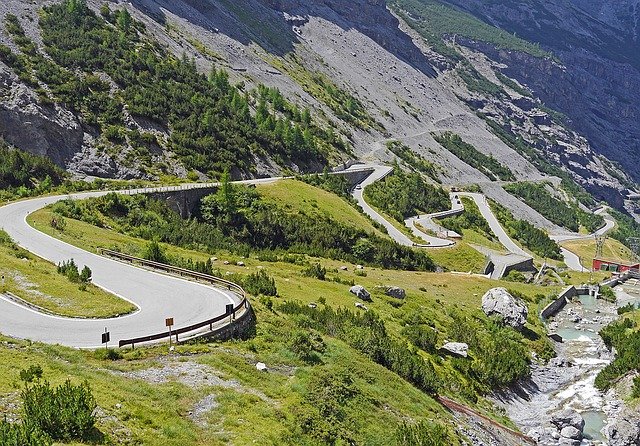 Italy cultivated the rest of the world with their pristine taste, introducing us to Italian food; car brands such as Ferrari, Lamborghini, Maserati, and Lancia; batteries, and more. To top off, roads are also a bit of their specialty, seeing how well-positioned Italy is from a geographical point of view.

Probably one of the greatest and renowned driving roads in the world, the Stelvio Pass, amasses all its fame for great reason. It is Europe’s second-highest vehicle pass, sitting at a staggering 9,048-foot elevation. This makes the Transfăgărășan or Transalpina sitting at around 7,000 ft look like beach cruises.

Even if Italy is populated and quite dense, some roads are mainly barren making you feel as if you are at the end of the world. Such a road is the Fonte Cerreto – Campo Imperatore, however, not even close to the Dalton Highway as a general feel, but this is not the road we are talking about. (1)

Each road has a purpose, and similar to the Transfăgărășan, the Stelvio Pass has many things going for it. And both from an economical point of view and a military one.

Nowadays, it lost nearly all of its military interest, the only border which is relatively close being the Swiss one. However, Switzerland is known for being a paragon of neutrality in any conflict, and as such the Stelvio Pass remained a geographical border if you wish. (2)

Currently, the Stelvio Pass is of great interest to Italy and the whole world for that matter. The 31-mile long pass is a significant point of interest for anything tourism and sports-related. It crosses the Alps, one of the truly beautiful mountains in all of Europe, attracting all kinds of people both in the summer and winter. The Stelvio National Park also crosses the pass, home to a variety of local fauna such as the chamois or the Apennine Wolf.

From a sports point of view, the Stelvio Pass is a significant attraction for cyclists and motorcyclists alike. Many people try their luck and strain their guts climbing one of the tallest bits of road in the whole of Europe, which when coupled to the road’s immense difficulty makes for substantial bragging rights.

Due to its challenge, the Giro d’Italia, also known as the Tour of Italy, took great interest in the Stelvio Pass, usually making its appearance as a route in the Giro. Cycling is so important for the pass, that on the last Saturday of August or on the first Saturday of September, the local authorities close the road for automotive usage, only allowing cyclists on the pass. This is known as Stelvio Bike Day, and it usually amasses a crowd of over 10,000 people.

Driving on the Stelvio Pass is breathtaking. Going across the 48 hairpins slow and methodically is possible thanks to the narrow road protected by modest stone barriers. While slowly ascending, you’re surrounded by trees and the Alps offering a view that is, simply put, gorgeous. There are plenty of tiny gaps between the trees which greet you with snowy mountain tops seemingly coated in glaze. The road is quite steep, with an average slope of 7.1-percent, reaching as high as 12-percent. A puny Fiat 500 will breathe its lungs out quite a bit after climbing such slopes for tens of miles all while experiencing an elevation increase of 4,900 feet. (3)

Driving on the pass makes you wonder how could they even do something like this back in the 1820s, and develop it so well that the layout remained, for the greatest part, unchanged. You will wonder how the villages on the mountain peak are equipped with supplies, anything bigger than a compact sedan seemingly appearing to block the entire road. Every turn feels substantial as if the world’s burden got ever so slightly lighter after the wheel straightened out and you are back on the accelerator.

Each hairpin is quite tight, with no room to take them wide unless you want to join the club of people who crashed at altitudes of 8,500 feet. However, stepping on the throttle between hairpins is doable, with the caveat that you slow down in time. Otherwise, you will hit a railing, fly off the mountain, or hit someone else. This whole process seems similar to a dance, a beautiful choreography where you, your car, and the pass have to be in sync. Remember, you are not in control. The Stelvio Pass is.

On the other hand, the Transfăgărășan in Romania is a whole different kind of road. You could consider the Transfăgărășan more in the same way as a rough afterparty of a rock concert’s grand finale. You could either enjoy the gathering casually and bathe in the experience with a light drink while discussing the concert’s fireworks, or you could pass out in the bathroom while mistaking the music’s bassline for your heartbeat, wondering if your time has finally come. In all, Romania’s premier roadway delivers a more brutal experience when compared to Stelvio’s Pass pristine Italian refinement. (4)