Step back in time with me when men’s hair was longer, pants wider, and shirts tighter. The year was 1976 and the Ford Fiesta (top photo) made its initial debut in Europe. Eventually, the car made its way to North America, but it never had quite the success it managed to achieve on the other side of the pond. 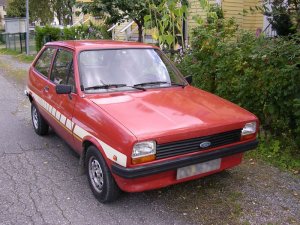 Later, Europe and North America shared Ford’s world car, the Escort, but the closest we’ve gone to having a car that both Europeans and North Americans loved was the Focus. Even now, the Focus sold in Canada and the United States isn’t the same one sold in Europe.

Last Friday, Ford announced that the all-new Fiesta (bottom photo), which will be hitting European streets in 2009, will begin production at the company’s Cuautitlán Assembly Plant in Mexico early the following year. Moreover, the subcompact sedan will be joined by a hatchback with both cars sold in the North American market. At present, the Mexican plant produces F-Series pick up truck for the Mexican market, but will be converted into a plant that produces the Fiesta for the North American market (US, Canada). In addition, Ford has announced that the company’s Chihuahua Engine Plant, which already builds I-4 engines, will assemble diesel engines for light- and medium-duty trucks in a variety of global markets. Lastly, via a joint collaboration with Getrag (GFT), Ford will build a new transmission plant in Guanajuato to support a number of Ford products.

Ford’s total investment in Mexico will increase by $3 billion which includes investments being made by local suppliers, with as many as 4500 new Ford jobs coming to Mexico.

The Ford Verve concept which appeared at auto shows this year is the design for the next generation Fiesta.