Nissan’s smallest crossover is big on value and styling. Budget cars have given way to low-cost crossovers, underscoring a trend we’ve seen in recent years. Not every manufacturer, though, manages to combine value with amenities, but in the Kicks Nissan certainly does. With a starting price of around $20,000, the 2021 Kicks gets most things right.

Nissan prices the 2021 Kicks from $19,070, plus a $1,095 destination charge. This model is available in S, SV, and SR trims. The Kicks is a subcompact, front-wheel-drive-only crossover with room for up to five.

For 2021, the Kicks is refreshed with its updated exterior styling, including a refreshed grille and available LED headlights. New exterior colors, fresh wheel designs, and rear disc brakes for the SV and SR grades are among the changes. With the latest design update, the Kicks seems more detailed than before. We attribute this to the double “V-motion” grille now dominating its face. Along with the available LED headlights, the look imparts a measure of sophistication. Overall, the front end is also more aggressive as the grille occupies a larger slice of the fascia’s real estate. As before, cutouts along the outside bumpers give this model sporty flair.

The Kicks’ profile has a cut-above look, especially with the available contrasting black roof in our test model. The beltline gradually rises as it moves back, then suddenly kicks up toward the rear to form a floating roof design. Upper and lower character lines and body sculpting add visual interest. The wheel choices simply look great.

From the rear, the large wraparound tail lamps are connected by a reflector panel. Or at least they are in the SR trim. A liftgate spoiler and reflectors are design touches we appreciate.

However, moving up does bring with it some interesting upgrades. LED low beam headlights are standard with the SR trim as are the LED front fog lights. Heated side mirrors appear with the SV trim as does the rear spoiler. Roof rails are included with all but the base trim. We like the 17-inch aluminum-alloy wheels found in the SV and SR trims. 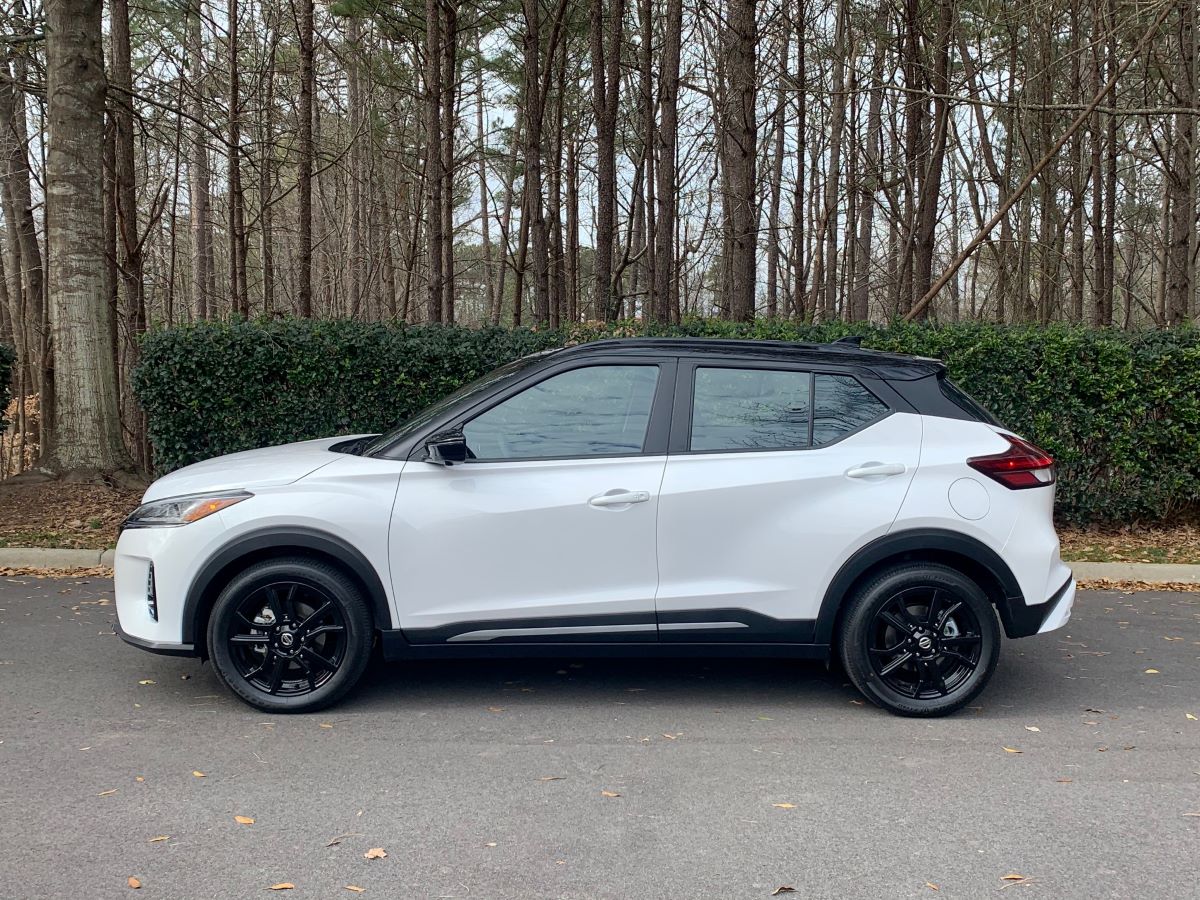 Four people fit inside the Kicks with ease. Add a fifth if you want, but only in a pinch – it simply gets a little too cozy back there to hold three adults. If you need more room, then turn your attention to the compact Nissan Rogue.

Cargo space is strong with this little crossover. It measures 25.3 cubic feet behind the second row or 53.1 cubic feet behind the first row. However, you should know the rear seat doesn’t fold quite flat as it still lifts slightly when it is dropped down. As for towing, this isn’t the model for you as it isn’t rated to pull anything.

Straightforward is the Kicks’ cabin, which offers updates this year. Some of the more noteworthy features include a flat-bottom steering wheel – it was thickly padded in our test model. Large, wide in-door pockets in the front doors hold two drinks each with ease. The SV and SR models come with a center armrest, which does double duty as a storage compartment. It’s smaller than what some may prefer, but the overall storage area space is reasonable. 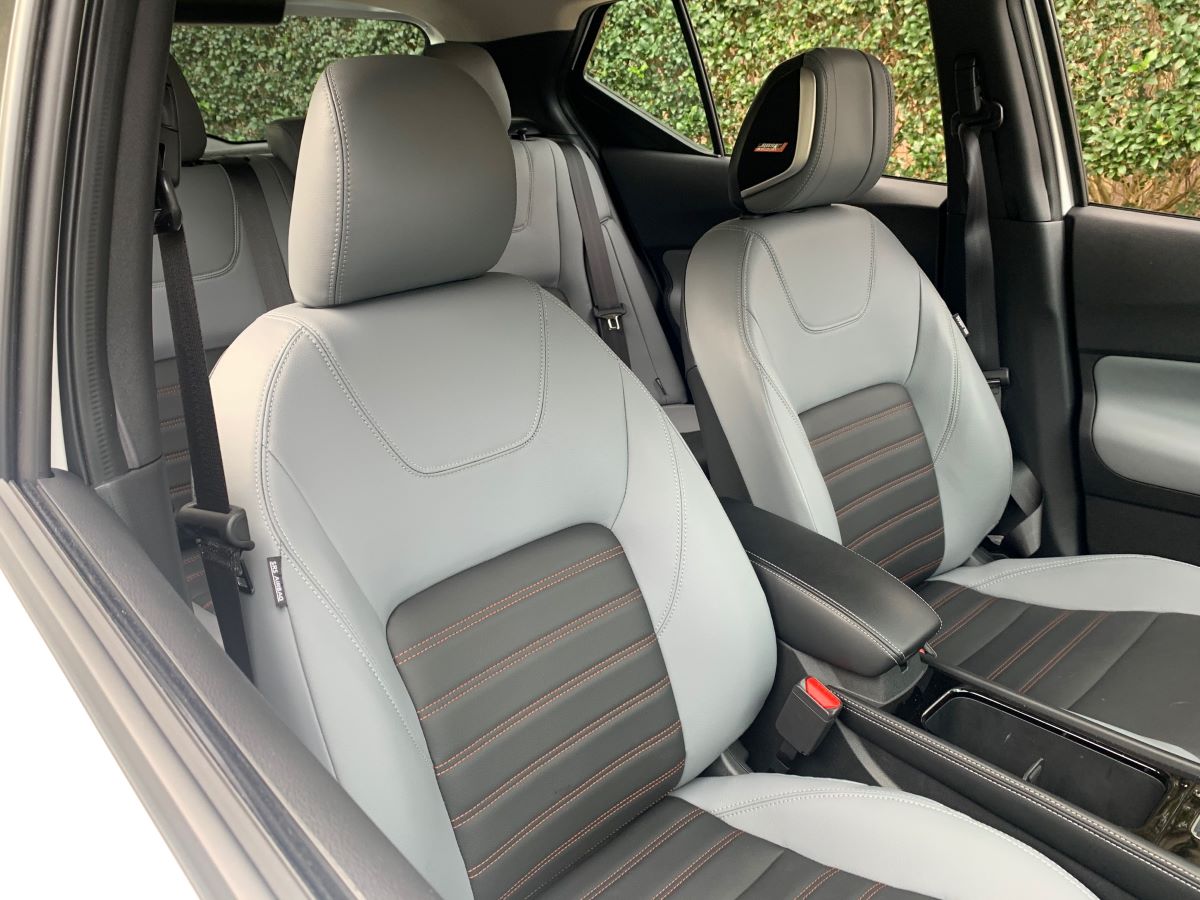 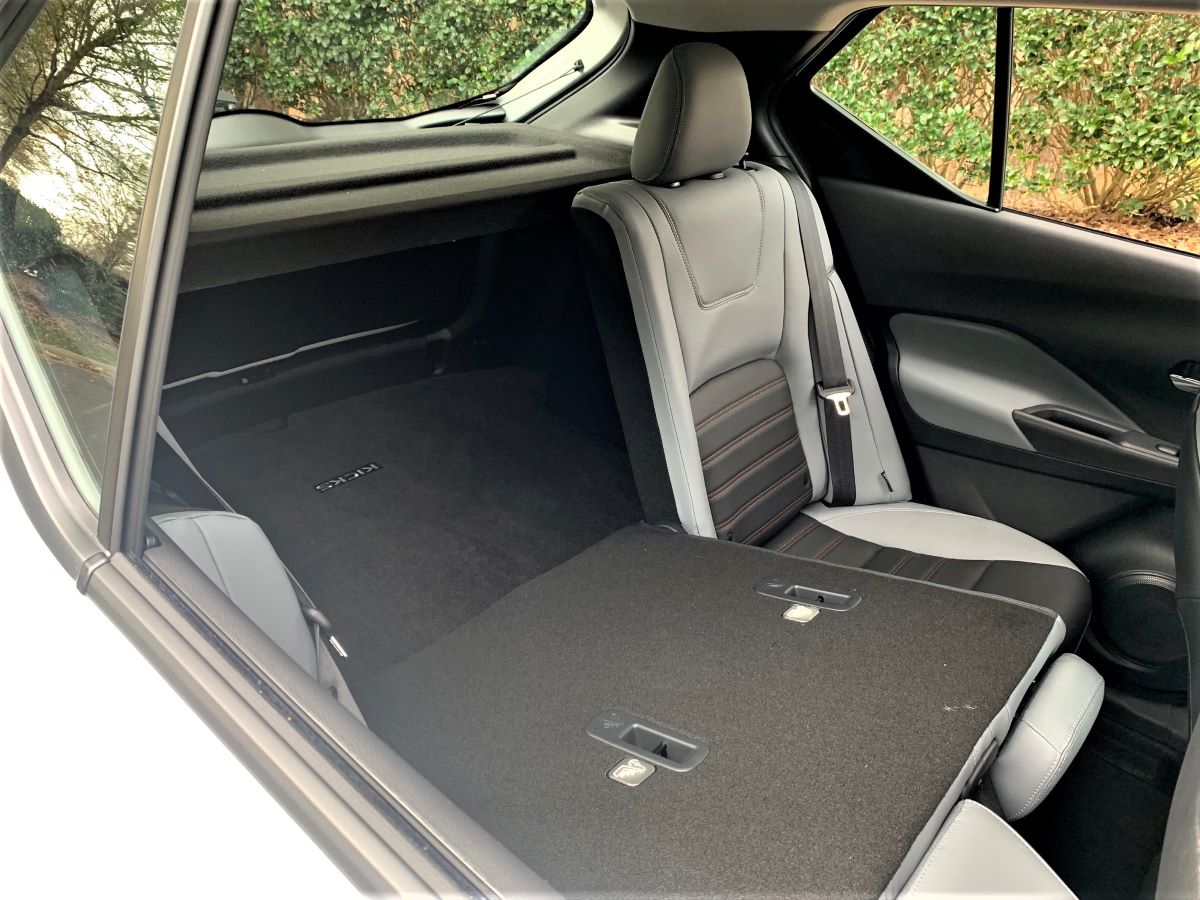 Our test SR trim featured the Premium Package, which included orange twin-stitching across the dashboard and on the seats. The look is sporty and is a welcome contrast to the budget feel of the base model.

We found the front seats were reasonably comfortable. For drivers taller than six feet, the seats may not be sufficiently supportive. As with most small crossovers, the Kicks could use slightly longer seat bottoms to support the lower back, hips, and thigh. I might need to add a pillow to reach a comfortable point for long hauls.

The rear seat is flat and not as generously padded as in the front. We think it’s ideal for children and passable for adults.

A 7-inch touch-screen display is standard. Siri Eyes Free, Bluetooth, a six-speaker audio package, and three USB ports are also included. This is fairly standard fare for the segment.

There are a few upgrades once you move away from the base trim, including an 8-inch touchscreen display. Android Auto and Apple CarPlay smartphone compatibility along with satellite radio appear with the SV trim.

A Bose audio package with an 8-speaker audio system is available. Beyond that, there are no other upgrades, but that’s typical for this class. If there is any standout feature for the Kicks, then that would be its standard driver-assist technology.

The Kicks’ crash test ratings are not the best, with the National Highway Traffic Safety Administration (NHTSA) assigning it a four-star rating, with lower scores in frontal crash and rollover keeping it from a top rating. Similarly, the Insurance Institute for Highway Safety (IIHS) gives the Kicks top scores in most categories, but the headlights range from poor to acceptable, depending on the trim. The Kicks holds up in crash testing, but the IIHS dings models that don’t have better headlights, despite the standard safety package.

Just as the Kicks excels in all things driver-assist technology, it is weak in the performance realm. This demerit, however, isn’t unexpected as the Kicks’ roll is simplicity, efficiency, and cost-effectiveness. Its fuel economy is stellar, coming in at an EPA-estimated 31 mpg in the city 36 mpg on the highway for a combined 33 mpg. We see some competing models struggling to average 30 mpg.

Governing the Kicks is a naturally aspirated 1.6-liter four-cylinder engine. This one makes 122 horsepower and 114 pound-feet of torque for one of the lowest performance thresholds anywhere. A continuously variable automatic transmission routes power to the front wheels.

The Kicks starts up and moves forward with relative ease. Its light weight helps here, but there is nothing about its forward motion that impresses. Continue to pick up speed gradually and you’ll maximize its efficiency as intended. But if you must call on extra power, the engine whines as the CVT stretches power accordingly. With one person aboard (the driver only), the Kicks can handle matters with ease. Once you start adding people and begin climbing hills, you’ll need to lower your expectations accordingly. The Kicks easily loses its kick whenever the engine is asked to do more than it can handle. Be prepared to be underwhelmed, perhaps even a bit concerned, if you need to dart in and out of traffic accordingly.

We think Nissan should consider an optional engine for this model, but that would fly in the face with how Nissan handles its smallest crossovers – Kicks, Rogue Sport, and Rogue – a turbocharged version of the same engine would be a welcome option, even if it adds $1,500 to the price. The Buick Encore GX gives customers a choice of two turbo engines and they’re three-cylinder powerhouses at that. The extra kick when you need it would supply a vote of confidence during trying times.

As for the other drive attributes, the steering is average, the Kicks tracks well, and we like how easily it maneuvers, especially in tight spaces. Its ride is also average – just avoid potholes and bumps and you’ll be okay. Rarely do we recommend the base model and that holds for the 2021 Kicks. Although its standard safety tech is impressive, the best amenities come with either the SV or SR trim.

Given that the price separation between the base and top models is just over $2,000, we recommend the SR as our pick. Further, we would opt for the SR Premium Package ($1,000), which adds the 8-speaker Bose audio system, upgraded cloth seats that are also heated, and a vehicle security system. Your out-the-door price is still under $23,000 and that’s a reasonable cost for this model.