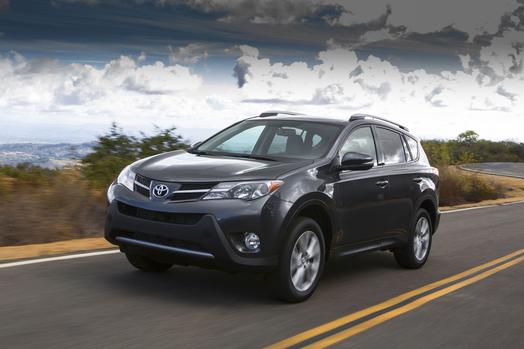 My wife’s favorite vehicle is the Toyota RAV4, an important disclosure I want to get out of the way before touching on the salient points of this crossover utility vehicle. Fortuitously, a 2013 Toyota RAV4 Limited arrived in our driveway the very week her aged RAV4 was beginning to show some problems, giving our family an opportunity to put the new model to a week-long test before we decided whether to buy one or not. Our purchase decision is on hold, but the RAV4 is definitely on top of our “to buy” list, a capable vehicle that is now in its fourth generation.

Toyota made significant changes to the RAV4 from the first to second generation, and once again poured its resources into ensuring that the latest model is a hit. The changes between second and third generation models were less pronounced although the RAV4 received an extended wheelbase and gained an optional third row seat for two. The current iteration shares the same dimensions as the last RAV4.

The 2013 Toyota RAV4 returns to its traditional five-seat layout. If you need more seats the Toyota Highlander is where you’ll want to look instead, but for most small families the RAV4 has the passenger room and storage capacity that they need. It also provides 1,500 pounds of towing capacity, sufficient to pull your camper.

Front-wheel drive is standard with the Toyota RAV4 and all-wheel drive is optional. As tested, the top-of-the-line Limited was AWD. All models are powered by a 2.5-liter four cylinder engine paired with a six-speed automatic transmission.

And it is the larger four that has made all the difference for the RAV4, an engine Toyota rolled out in 2006 when this vehicle was last updated. Its 176 horsepower rating is sufficient for this model and a welcome improvement over the 148 horsepower 2.0-liter four that outfitted the second generation model. Alas, the current generation model also gets rid of the optional 3.5-liter V-6 that was available from 2006 to 2012. Chances are that most people will be satisfied with the lone engine-transmission line up, however.

The all-new body shell for the Toyota RAV4 delivers a more upscale and sporty look, bringing this model closer in appearance to the midsize Highlander. Gone is the rear-mounted spare tire and side-hinged hatchback. The spare tire is now found at the base of the cargo floor and the rear door is now a true liftgate design that opens straight up. Guess which layout is favored by parents with packages and children in tow?

Inside, the Toyota RAV4 offers a much more carefully designed and attractive cabin than provided before. The RAV4 Limited is outfitted with SofTex trim what has the look and feel of leather, but uses synthetic materials. Leather trim is reserved for the steering wheel and the transmission shifter.

Rear seating passengers get a 60/40 split bench seat with a fold-down center armrest. In total there are eight cup and beverage holders, and a generous amount of rear storage space. Fold down the rear seat and 73 cubic feet of storage room becomes available.

Toyota had techno-geeks in mind when designing the RAV4. At the base of the center console, a covered area for a USB port and an auxiliary input port can keep you connected. A “resting” pad keeps your smartphone secure while driving or you can prop up the screen in the adjacent storage tray to view it while driving. That connection point is just to the right of a panel with Eco and Sport mode selectors as well as heat warmers for the front seats.

With a base price of $23,300 for the Toyota RAV4 LE ($24,290 for the XLE; $27,010 for the Limited), this model offers ample standard equipment. Automatic projector beam headlamps, daytime running lights, a color-keyed rear spoiler, and 17-inch wheels are standard. Inside, keyless entry, a tilt and telescoping steering wheel, air-conditioning, power windows and door locks, cruise control, and two 12-volt outlets are included.

Jump up to the XLE and alloy wheels replace the standard steel wheels. This edition also brings in heated and power side mirrors, fog lights, a tilt/slide moonroof, roof rails and chrome accents above the grille. Inside, dual zone climate control, upgraded seats and a cargo area tonneau cover are included.

Choose the Toyota RAV4 Limited and your vehicle is outfitted with 18-inch alloy wheels, a power liftgate and the SofTex seats. The driver’s seat offers power eight-way adjustment and power lumbar support. The front passenger seat remains manually adjusted across the model line.

Taking to the Road

On the road, the 2013 Toyota RAV4 performed capably, delivering sufficient power when needed. The transmission shifter can be operated in automatic or sport mode, the latter allowing you to control shifting without a clutch. Handling is good with the RAV4 managing twists and turns of the road with ease. It isn’t a track performer, but it will suit what most people expect in a small SUV. Step on the gas and the RAV4 moves forward with confidence, taking approximately 8 seconds to get to 60 mph from a dead stop. Braking is assured and the cabin is quiet with average engine noise detected.

The Toyota RAV4 stands tall among its competitors. These models include the Honda CR-V, Subaru Forester, Ford Escape, Chevrolet Equinox, Dodge Journey, Nissan Rogue, Volkswagen Tiguan, Hyundai Tucson, Mitsubishi Outlander, Mazda CX-5 and the Kia Sportage. Auto Trends has had both the Forester and the Escape over the past year and would rate the RAV4 ahead of the Escape, but just behind the Forester. The Forester’s all-wheel drive system is simply too hard to beat.