“Minivans are popular among parents, a group that tends to be safety conscious, but we’ve only seen two so far that offer decent protection in small overlap crashes,” says David Zuby, IIHS executive vice president and chief research officer.

The IIHS says that the test “…replicates what happens when the front corner of a vehicle collides with another vehicle or an object such as a tree or a utility pole, the crash forces bypass the vehicle’s main energy-absorbing structure.” The institute noted that these types of crashes can be especially difficult for minivans to handle due to them being built on car platforms that are also wider than cars. With more of the vehicle located outside of the main structure, those areas are more vulnerable. Moreover, minivans weigh more than cars. 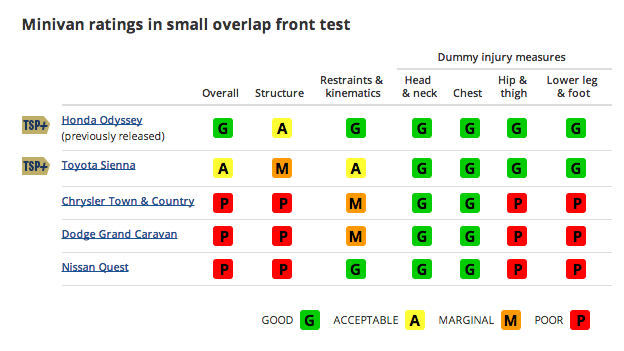 Toyota’s Sienna model fared well because the manufacturer updated the front end beginning with the 2015 model year specifically to aid in small overlap protection. Even so, it didn’t perform as well as the Honda Odyssey with the IIHS noting an intrusion of 5.5 inches at the upper door hinge pillar and the instrument panel.

The dummy’s head also contacted the front airbag then slid off to the left side. The Institute also found that the safety belt did not do its job properly as it allowed the dummy to move too far forward.

Still, there were some positives for Toyota. The side curtain airbag deployed and provided adequate forward protection from the intruding structure. Subsequent measures revealed that the injury risk would have been low in a real crash.

As for the Nissan Quest, the institute found that the vehicle’s structure was shoved in by almost two feet at the lower hinge pillar. Moreover, the parking brake pedal moved forward toward the driver by 16 inches. The dummy’s left leg was also trapped between the instrument panel and the seat, and its right foot got caught between the brake pedal and toe pan. To remove the dummy, technicians had to cut the entire driver seat out. They then used a crowbar to free the right foot.

The Institute said that a real person involved in such an accident “…would be lucky to ever walk normally again.” Likely, that individual would suffer from a broken right femur. The IIHS applied its poor rating to Quest models spanning five model years from 2011 to 2015.

As for the Chrysler Town & Country, its structure collapsed around the dummy. The Institute found that the intrusion measured 15 inches at the lower hinge pillar and the instrument panel. The technicians also revealed that “…skin on the dummy’s left lower leg was gouged by the intruding parking brake pedal, and its left knee skin was torn by a steel brace under the instrument panel.” Moreover, the head scarcely touched the front airbag before moving off and striking the instrument panel, as the steering column shifted to the right. The technicians also discovered that the door sill and the steering column both pushed in near the driver. The side curtain airbag did deploy, however it did not provide adequate forward coverage.

The Institute said that “measures taken from the dummy indicate that injuries to the left hip, left knee and left lower leg would be likely in a crash of this severity.” Notably, some of the forces encountered “were off the scale.”

The results have been applied to 2008 to 2015 Chrysler Town & Country models and its twin, the 2008 to 2015 Dodge Grand Caravan. A third model, the now discontinued Volkswagen Routan, also is covered for four model years spanning 2009 to 2012. The Routan was a rebadged Chrysler minivan.

One minivan model has yet to be tested and that would be the Kia Sedona. The manufacturer has told the IIHS that it is making changes to the model over the coming weeks in a bid to improve small overlap protection.

Following the most recent test, the IIHS also assigned the Toyota Sienna with its Top Safety Plus award.

News story provided by the IIHS.