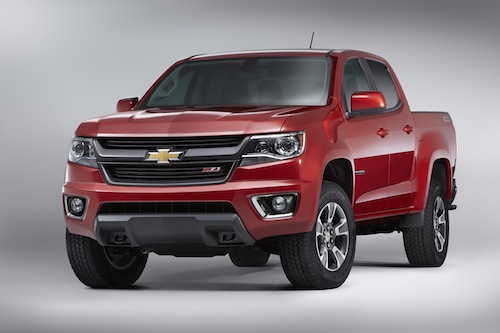 It is a fact that GM needs a pickup truck hit. Its current generation Chevrolet Silverado and GMC Sierra models are new for 2014, but the six-year-old Ford F-150 continues to outsell these two models by more than 100,000 units annually. Where GM can expect to enjoy some gains has nothing to do with its light- and commercial-duty full-size pickup trucks. Instead, it is a pair of medium-sized trucks that are expected to arrive in showrooms this fall in the form of the 2015 Chevrolet Colorado and the 2015 GMC Canyon. The two trucks are twins although there are considerable differences between the front fascias and trim offerings.

The new trucks will be sold in extended and crew cab layouts only. Both rear- and front-wheel drive editions will be available along with one four cylinder and one V-6 gasoline engine. A diesel engine arrives later. Both models will take on the Toyota Tacoma and Nissan Frontier, the only other pickup trucks in this segment.

The Colorado and Canyon are not new names, both models were used up until 2012 when they were canceled. GM had planned to bring them back, but it decided to cancel the previous generation models rather than waiting around with the old models while the new trucks were being prepared.

The 2015 Chevrolet Colorado may be smaller than the Chevy Silverado, but it shouldn’t be taken as a lightweight either. The base weight of the extended cab truck with its 6-foot, 2-inch bed is 3,959 pounds. The crew cab with a 5-foot, 2-inch bed weighs in at 4,037 pounds, and the crew cab with the larger box tips the scales at 4,266 pounds. Payload and trailering capacities will be announced later.

Colorado shoppers should be pleased to find many of the big truck features on the 2015 model. That same CornerStep bumper design on the Chevrolet Silverado will find its way to the 2015 Chevrolet Colorado. This writer spent a week with the Silverado earlier this year and was happy to have that feature included.

Other important features coming include an easier to lift and lower tailgate, a two-tier loading compartment for the truck bed, 13 standard tie downs, bed rail and tailgate protectors, and available factory-installed spray-in bed liner. Inside, the Colorado gets sculpted door panels for easier access and egress, an upper instrument panel storage bin, a large center console storage compartment with room to house a tablet, and rear under seat storage.

Technological features include an 8-inch color display for all models except with the work truck, multiple USB drives, available OnStar and Chevrolet MyLink, an available navigation system, and diagonal driver information screen in the instrument cluster. Numerous safety features are included or available such as six standard airbags and large review mirror with a rearview camera. Forward collision alert and lane departure warning are optional.

Pricing and other model details will be available closer to the release date. Well have a full review of the 2015 Chevrolet Colorado once we get our hands on one. In the meantime, check out Next Truck International for a healthy dose of big rigs.