Lets’ face it: rearview cameras may have helped you avoid a catastrophe, perhaps just missing the child hidden behind your vehicle or enabling you to spot a vehicle zipping by as you back out. Quick intervention on your part saved the day, but it may not always be enough to mitigate every future accident. Soon, saving the day may require electronic intervention, something few vehicles currently include, but more will likely offer in the coming years. Indeed, rear crash prevention systems go one step further by hitting the brakes if you don’t heed warnings.

The Insurance Institute for Highway Safety (IIHS) — representing a consortium of auto insurance companies and other stakeholders — routinely tests most new vehicles, assigning each with a score based on crashworthiness and other factors. Such factors include front crash prevention and lighting systems, what can help prevent accidents in the first place. Thus, you can now add rear crash prevention to the mix, specifically rear autobrake systems, as the IIHS has begun testing them. 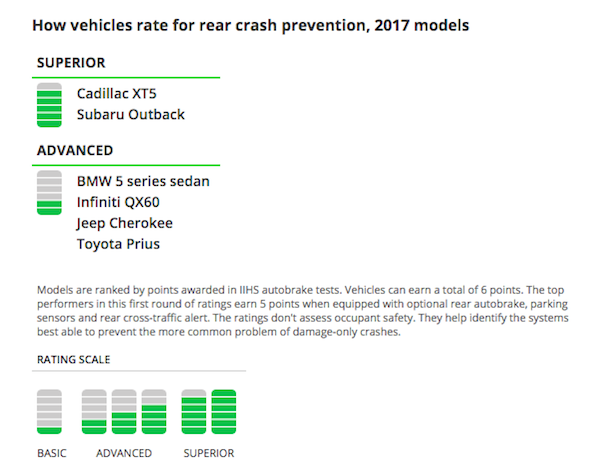 Several technologies comprise rear crash prevention systems, including parking sensors to warn drivers when a vehicle or object is too close to the car. Further, these technologies include rear cross-traffic alert, using sensors to detect a moving object, such as another vehicle crossing your path as you back up. The third technology is rear automatic emergency braking, what automatically stops your vehicle if you don’t react fast enough.

“Let’s face it. Some days we all could use help backing up, whether that’s in a garage with pillars that obscure your view, in a crowded mall parking lot or on a busy downtown street,” says David Zuby, the Institute’s executive vice president and chief research officer. “The systems we rate in our first batch of tests will help reduce the chances of a backing fender-bender.”

So, how does the IIHS assign a rating? Specifically, the ratings evaluate the rear crash prevention systems’ ability to prevent damage in low-speed crashes, not their ability to mitigate injuries in crashes.

IIHS and Highway Loss Data Institute (HLDI) research has determined that the technology works, reducing the number of such crashes reported to police by 78 percent — citing a General Motors’ study. Indeed, in August 2017 the HLDI reported that rear autobrake systems from GM and Subaru reduce the number of crashes reported to insurers. Certainly, cars equipped with such systems will also cost less to insure.

The Institute skews its new rating program toward rear autobrake systems as these do the best job in preventing accidents. The other two systems get partial credit, but scoring is clearly weighted to systems that actively prevent an accident.

To obtain a superior rating, vehicles outfitted with a rear autobrake system must avoid a crash or at least substantially reduce its speed in many of the test scenarios, involving multiple runs at about 4 mph. Points are assigned based on the number of runs that either avoid or barely hit the target by reducing speeds to under 1 mph. To achieve an advanced rating, vehicles must have autobrake and avoid an accident or reduce its speed in at least in some of the scenarios. A basic rating is assigned to vehicles without autobrake, but still equipped with parking sensors and rear cross-traffic alert.

The IIHS also tested vehicles to determine how much damage they sustained without autobrake active. The Cadillac XT5 backed into a pole, sustaining $3,477 in damage. The Subaru Outback backed into a 2016 Chevrolet Cruze, the estimated damage to both vehicles came to $1,899 —$1,159 for the Outback and $740 for the Cruze.

No Impact Yet on Crash Test Ratings

With another test part of the IIHS equation, the Institute hasn’t said how or whether such systems and ratings will impact its overall ratings. Right now, automakers vie for two coveted ratings — Top Safety Pick and Top Safety Pick+ — the latter made more difficult to obtain in recent years as the IIHS raises it grading criteria.

0 372
Craigslist Car Scams and How to Avoid Them