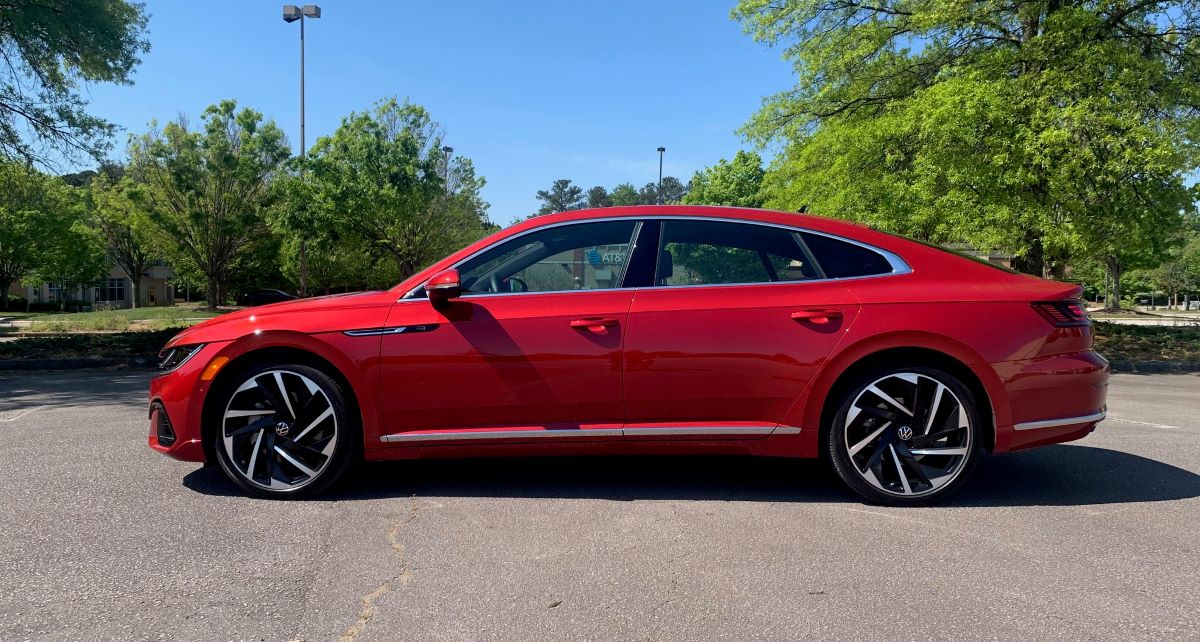 The VW Arteon is a style maker.

The Volkswagen Arteon may be the most anonymous four-door in its class. This midsize model bridges the mainstream and luxury segments with a look that is stylish, upscale, and even a bit pricey. Yet, it doesn’t get the attention it deserves, although that may be changing.

Indeed, with the similar-sized Volkswagen Passat retiring from the North American market this year, the Arteon will have the segment all to its own. That overlap may have held sales down as well as the Arteon’s high price and the declining demand for all midsize sedans. Likely, Volkswagen decided to keep the Arteon in a bid to attract and maintain a niche customer base.

We first set eyes on the Arteon at the 2019 Chicago Auto Show where it made its debut ahead of its release. Several months later we test drove one and then had a second chance this year. You can find our reviews here and here.

This week, we have learned that Volkswagen is upgrading the 2022 Arteon with a new powertrain set. The automaker is replacing the previous 2.0-liter turbocharged four-cylinder engine with a new one. Where the previous engine delivered a robust 268 horsepower and 258 pound-feet of torque, the new engine makes an outstanding 300 horsepower and 295 pound-feet of torque. Furthermore, the 8-speed automatic transmission goes away in favor of a 7-speed dual-clutch transmission.

For 2022, the VW Arteon comes in three trims: SE R-Line, SEL R-Line, and SEL Premium R-Line. This means the sporty and elegant R-Line dressage is standard inside and out.

For the standard trim, this one features an 18-inch wheel design. It gains front and rear Park Distance Control and wireless charging for compatible smartphones. Move up to the SEL R-Line and this one comes with standard all-wheel drive. Also, 20-inch dark graphite wheels are optional. As for the range-topping SEL Premium R-Line, it is unchanged.

Besides the Arteon, Volkswagen announced changes for the remainder of its model line. At the heart of those changes is what Volkswagen calls the “democratization of technology.” This means that most VW models will see a digital cockpit. Further, the IQ.DRIVE driver assistance technology is now offered with most 2022 models. Where it is not standard equipment, it is optional.

What is IQ.DRIVE? That is Volkswagen’s name for its suite of driver-assist safety equipment. The tech includes the following:

The next new model in the VW portfolio is the Volkswagen Taos. This small SUV slots beneath the VW Tiguan. Available in S, SE, and SEL trims, the Taos is priced from $22,995 with standard front-wheel drive and $25,040 with available all-wheel drive. Add $1,195 for the destination charge.

The Taos is governed by a 1.5-liter turbocharged engine that develops 158 horsepower and 184 pound-feet of torque. With front-wheel drive, power routes to the wheels utilizing an 8-speed automatic transmission. This model averages 31 mpg. The all-wheel-drive Taos works with a 7-speed dual-clutch transmission and averages 28 mpg.

All in all, Volkswagen continues to modernize its fleet, while eliminating unpopular models and bringing potential strong sellers onboard. Gradually, we will see Volkswagen pivot from gas-powered models to electric, with additional models joining the VW ID.4. However, that transition may not happen as quickly as the automaker wants, with consumers ultimately deciding the type of vehicle they will purchase.