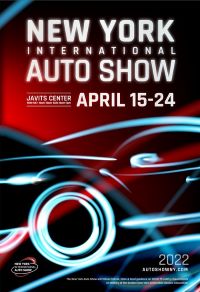 We all know what a trainwreck the COVID-19 pandemic had on our lives these past few years. Besides the monumental human toll, life just has not been anything like normal for about two years.

New York is one of those cities emerging from a lengthy and protracted lockdown or at least social distance restrictions that has changed nearly everything, including the auto show calendar. Indeed, last year’s auto show was moved to August, then canceled just ahead of its start. That loss was felt throughout the industry, but keenly so by those planning to attend it, including yours truly.

This year’s show returns to its normal spot, part of the Holy Week runup to Easter. Alas, my plans changed at the last moment, therefore I’ll be tuning in from my North Carolina base to report the news. New York, next year?

Officially known as the New York International Auto Show or NYIAS, this year’s show will once again operate from the Jacob K. Javits Convention Center in lower Manhattan. The public event begins this Friday, April 15, 2022, and runs through Sunday, April 24. Yes, the show operates on Easter Sunday.

Like other major auto displays, the New York auto show continues to remake itself. The event has evolved since its founding in the early 1900s, but in recent years it has had to find ways to keep tech-savvy consumers engaged. This year, the show’s organizers established a 250,000 square-foot “EV Experience” section that occupies two-thirds of the lower level.

With professional drivers on hand, NYIAS visitors will be able to ride in new models from established makes such as Volvo, Kia, Chevrolet, and Nissan. Moreover, new manufacturers, including California’s INDI and Vietnam’s VinFast will also participate. In addition, Hyundai and Ford will include EV test tracks within their displays on the main floor, supplying more opportunities for consumers to evaluate electric vehicles.

We will be tracking the many news stories certain to accompany the various on- and off-site media events on Wednesday and Thursday. That said, we know of several important debuts, including the following.

Most major manufacturers will participate in the New York auto show although a few will stay away. But that means more room in the tightly packed convention center for startups and the EV display.

Two of the most popular SUVs of our day are from Korean manufacturers. The Kia Telluride and Hyundai Palisade shook the midsize, three-row crossover utility market when they rolled out for the 2020 model year. After a banner three-year run, the duo will undergo important mid-product-cycle refreshes for 2023, designed to keep them strong contenders in the segment.

VinFast, which has recently announced its plan to build a manufacturing facility in Chatham County, North Carolina, will have a place at the show. The company launched in 2017 and is already making its presence felt beyond Vietnam. VinFast will showcase a pair of all-electric EVs in New York.

The Chrysler marque is down to just two models – the aged 300 sedan and the venerable Town & Country minivan. Parent Stellantis, however, has plans for the brand and these include the electrification of new models. One of these is the Chrysler Airflow, a concept vehicle destined for the Javits center. The Airflow name represents early Chrysler, but it may soon stand for a future model. We will learn more this week at the presentation.

With a plant in Illinois and headquarters in Camden, New Jersey, Subaru certainly does not like to miss the big auto shows. We do know that a refreshed Crosstrek will have its place at the show in addition to all the other models. Further, the “Subaru Loves Pets” display will be on hand.

Last year, Subaru was supposed to debut the all-new WRX, but the show was canceled. This year, the company was rumored to debut the high-performance WRX STI, but the company has since said this model won’t be built. Anyway, we expect Subaru will surprise New Yorkers with something special.

Beyond the mentioned models, the New York auto show will debut a refreshed Nissan Leaf. An all-electric Lincoln concept is also destined for a Gotham unveiling. Alfa Romeo has promised to display the all-new Tonale SUV. Show visitors will also see the new inline six-cylinder engine from Stellantis. That engine will power various Jeep models and may find itself under the hood of the Ram 1500.

Please check back over the coming days as well bring to you all the goodness of the 2022 New York auto show.