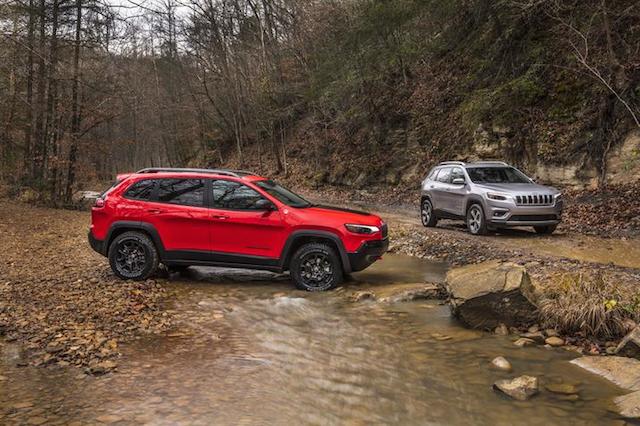 Ever since its 2014 return, the Jeep Cherokee has established and maintained a strong beachhead in the highly competitive small-to-midsize SUV segment. Notwithstanding its polarizing front fascia, the Cherokee has successfully played on both its name and rugged off-road capabilities to stand out. For 2019, an updated Cherokee arrives, delivering a refreshed nose and a new turbo engine to go with it.

Jeep introduced the 2019 Cherokee at the North American International Auto Show in January, two months after debuting the all-new 2018 Jeep Wrangler in Los Angeles. Together, the two models should help Jeep stabilize sales after the automaker trimmed fleet sales by 60 percent in 2017, resulting in a double-digit loss in the US market. Overall, Jeep global sales rose in 2017.

The refreshed Jeep, now entering its sixth model year brings with it a much more pleasing and streamlined front end, aligning with the style of the smaller Compass and larger Grand Cherokee. Instead of delivering separate lighting elements for the headlamps and daytime running lights, the updated fascia includes both in one assembly. The recognizable seven-vertical-slat Jeep grille is also present as are new fog lights and a new hood.

Three Engines, Including a New Turbo

But what’s new under the hood may excite Jeep fans the most. Specifically, an available 2.0-liter turbocharged four-cylinder engine with 270 horsepower and 295 pound-feet of torque expands the engine lineup from two to three.

The new engine comes with start-stop technology and joins the standard 2.4-liter four-cylinder engine with 180 horsepower and 170 pound-feet of torque as well as the 3.2-liter V6, generating 271 horsepower and 239 pound-feet of torque. A nine-speed automatic transmission works alongside all three engines; front-wheel drive comes standard, while all- or four-wheel drive can also be had.

Other changes include exterior, interior and tech updates, such as the following:

Redesigned liftgate. The Cherokee’s lightweight composite liftgate features an integrated light bar with a better-positioned release handle. Also, a handsfree option automatically opens same when an individual performs a kicking motion underneath with a key fob in hand.

Refreshed center console. Jeep updated the center console to move the media center rearward along with an enlarged front storage pocket, USB port and available 115-volt outlet. The interior also benefits from a pair of new color themes, depending on the trim. Three updated UConnect infotainment systems are also available, including one with navigation.

Jeep has yet to announce pricing for the 2019 Cherokee available in Latitude, Latitude Plus, Limited, Overland and Trailhawk grades. That will soon change as the refreshed model arrives in Jeep showrooms later this quarter. Indeed, production is already underway at Jeep’s Belvidere Assembly Plant in Belvidere, Illinois.

See Also — One Week With the 2017 Jeep New Compass