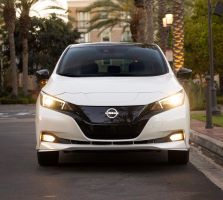 The Nissan Leaf is a trendsetter, the first mass-produced electric vehicle for the masses. Yes, it followed on the heels of Tesla, but unlike its somewhat rival, it retained an initial pricing advantage until the Model 3 appeared. More recently the Leaf has battled a host of new models, including the Hyundai Ioniq 5 and the Kia EV6.

Nissan will soon follow the Leaf with the Ariya crossover, but it is not giving up on its signature electric model. At least not yet. For 2023, the Leaf undergoes a modest update with a revised grille, upgraded wheels, and a new front bumper. Other changes include aerodynamic enhancements to the underbody, tire deflectors, and a rear spoiler. 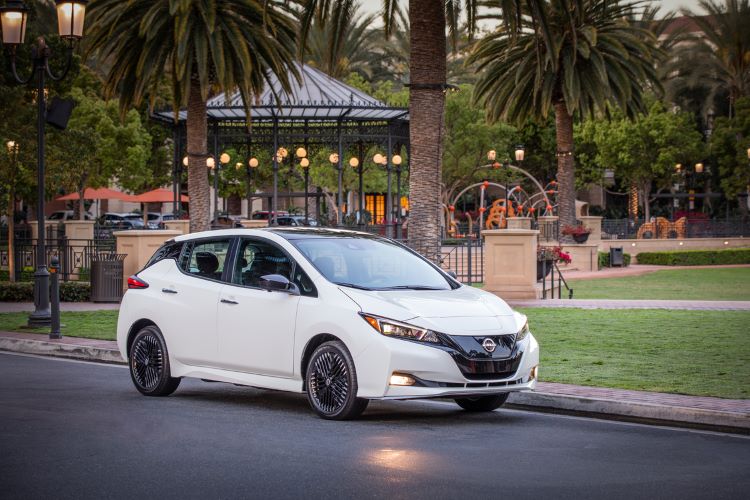 Nissan used the occasion of the 2022 New York International Auto Show to reveal the 2023 Leaf and discuss its plans. Besides the cosmetic changes, the upcoming model gains Nissan’s latest logo. It is illuminated as well.

Moving inside the 2023 Leaf gains a new start-up video on the instrument panel screen and the updated logo on the face of the steering wheel. For 2023, Nissan simplifies the product line with just two trims: S and SV Plus. Black cloth is standard with both. Gray finishers accompany the Leaf S, while gloss black finishers are found in the SV Plus.

Notably, Nissan lowered the price of the Leaf for 2022. The company says it will maintain its price positioning in 2023. Official pricing won’t come out until near this model’s summer debut, but the company says it will maintain “similar starting prices for 2023.” And for certain purchasers who meet federal qualifications, a tax credit of up to $7,500 lowers their costs substantially.

Nissan equips the 2023 Leaf S with a 40-kWh lithium-ion battery along with a 110-kW electric motor. This combination develops 147 horsepower and 236 pound-feet of torque. As for the Leaf SV Plus, this model has a 60-kWh lithium-ion battery and a robust 160-kW electric motor that generates 214 horsepower and 250 pound-feet of torque. Range estimates are typically released by the EPA closer to the product’s launch. Yet, a 150-mile range for the S and a 215-mile range for the SV Plus seems likely.

On the safety front, Nissan includes ProPILOT Assist4 with the SV Plus model. This safety represents a hands-on driver-assist system that blends Nissan’s adaptive cruise control and steering assist technologies. The package also includes a stop and hold function that can bring the Leaf to a complete stop. It also has a “hold in place” feature that enables the vehicle to return to its previous speed once traffic begins moving again.

No, the system is no substitute for responsible driving. In our findings, we discovered how useful it is, especially on clearly marked roads.

As for the lithium-ion battery pack, the warranty covers defects in materials or workmanship for eight years or 100,000 miles, whichever comes first. Nissan also supports a limited warranty against battery capacity loss below nine bars of volume as outlined on the Leaf’s battery capacity level gauge for the first eight years or 100,000 miles for all models.

That is one more way Nissan is offering assurance to prospective customers.

If Nissan holds true to its pricing for the 2023 Leaf, it will continue to offer one of the best deals in the industry. Most competitors are raising prices, even significantly so, but Nissan is holding firm. For 2022, the Leaf S starts at $28,425 (including the delivery charge) with the SV Plus costing $33,425. While competing models continue to push range and are often starting with 250 miles at their disposal, Nissan leads in price.