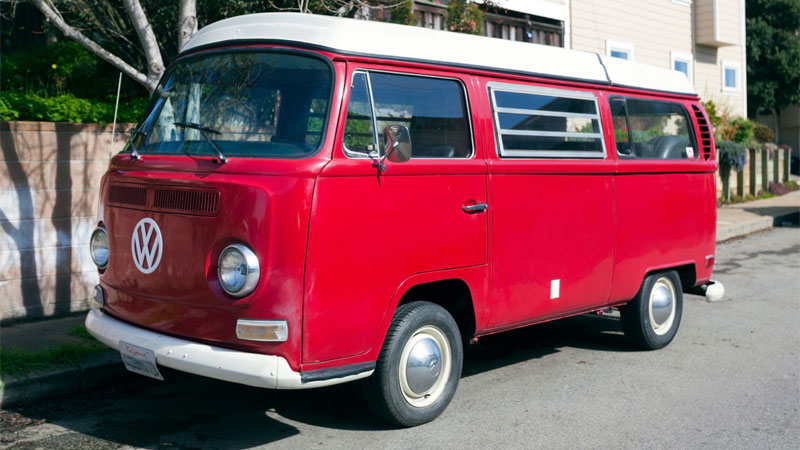 Years before the Volkswagen (VW) Microbus was associated with hippies, free love and protests against the Vietnam War, it served as a basic people hauler. It was just the second Volkswagen model built, following the Beetle to the market in 1950.

Although this vehicle disappeared from the US market in the early 1970s before returning briefly as the Vanagon, it continued to be sold elsewhere until production ended in 2013.

The Volkswagen Microbus was known by a variety of names including the Volkswagen Type 2. The Type 2 appellation described the second VW model built following the Type 1 or what is better known as the Beetle.

In the United States, the VW Microbus was simply called the Bus or Camper, in cases where a camper interior was present. One of its earliest names was Kombi with Bulli, Samba, Campervan, and Transporter used in various markets.

The next time you visit a classic car show, be on the lookout for one. Some adhere closely to factory spec, while others are enhanced with modern features such as LED headlights supplied by aftermarket manufacturers.

Modify a Volkswagen Beetle platform and its 1.1-liter air-cooled engine and place a van body on top of it and you have the makings of a new vehicle. Like the Type 1, the Type 2 featured a rear-mounted engine and transaxle, adding a ladder frame chassis and a pair of gear-hub reduction boxes to lower the gearing across all four gears.

The first-generation Microbus featured certain design characteristics that were unique to this model, including a split windshield layout and multiple window variations.

Standard models were equipped with 11 windows, DeLuxe versions had 15 windows and Sunroof DeLuxe models added eight small skylight windows for a total of 23 windows. The first models had removable middle- and rear-row seats, while later models had only a removable rear seat.

After an 18-year model run of the original, the second-generation Volkswagen Microbus was introduced. Gone was the split windshield, replaced by a single wraparound window. The window count dropped too with vent, side, sliding and rear windows featured.

Light truck versions of the Microbus were subject to a 25 percent tariff (chicken tax) and pending federal automobile emissions changes led to Volkswagen ending US imports.

Volkswagen continued to manufacture the Volkswagen Microbus after leaving the US market, building the vehicle at plants located in Germany, Argentina, Brazil, Mexico, and Australia.

The third-generation model was introduced in 1980 and was sold briefly as the Vanagon in the United States before high tariffs once again ended imports. Water-cooled engines gradually replaced air-cooled engines with additional design updates carried out in 1990 and 2003. By 2009 only the Brazilian plant was manufacturing the van, with that model based on the second-generation design with a water-cooled engine.

Although the VW Bus departed the US market decades earlier, it is fondly recalled by the generation that came of age in the 1960s. However, just three years after the original Woodstock music festival was held US distribution was ended, replaced later by the Vanagon.