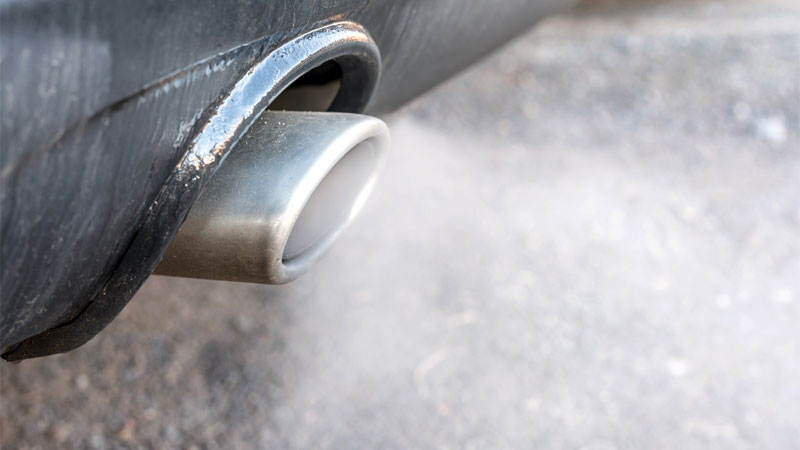 As motorists, we tend to know our vehicles quite well. This is why most motorists are able to recognize slight discrepancies in the way their vehicle runs, from one day to the next. We are often quick to pinpoint any issues that arise, due to our perception of symptoms related to these issues as being ¨new¨ or ¨strange.¨

This tends to be the case when one notices smoke of any type being emitted from their vehicle’s exhaust. For many, this is a significant cause for alarm, as this unfamiliar sight leaves a motorist to contemplate the potential causes of the sudden change in their exhaust’s appearance.

One of the most common complaints of this type regards exhaust smoke that appears to be white in color. The smoke of this type is often quite dense in nature, and is easily observed by any bystander in the immediate area. This smoke tends to appear most prominently on startup, or when accelerating, leaving ample cause for concern.

Read on to learn about the potential causes of white-colored exhaust smoke, as well as how to address such issues, should they arise in the future.

See Also – What is the Purpose of a Catalytic Converter?

Under ideal circumstances, a vehicle’s exhaust should be relatively clear at any point during an engine’s operation. This is indicative of high combustion efficiency, stemming from relatively acceptable engine health.

Simply put, an engine is properly metering the introduction of air/fuel into each cylinder. This mixture of air/fuel is then combusted to a high degree of completion, leaving behind little in the way of harmful hydrocarbons, oxides, and dioxides.

In turn, a vehicle’s exhaust should be scarcely visible, if even visible at all.

A general lack of exhaust smoke also indicates that nothing is entering a vehicle’s combustion chambers that should not be under ideal circumstances. This most notably includes coolant and oil, each of which should not be present to any notable degree at the time of combustion.

However, it is worth mentioning that it is completely normal for a vehicle’s exhaust to present sparse amounts of light gray or white smoke in the moments following startup, or at times when ambient temperatures are exceedingly cool.

This occurs when trace amounts of water are heated within a vehicle’s exhaust. This water is present due to the natural process of condensation.

Nonetheless, these trace amounts of water should be eliminated relatively quickly and should cause light colored smoke that does not appear to be overly dense in nature. Exhaust smoke of this type, or rather steam, should also dissipate rapidly after being emitted from a vehicle’s exhaust.

If this exhaust smoke does not clear up quickly, or appears to get heavier with time, another underlying issue might actually be to blame. In this case, further diagnosis will be required to uncover the issue at hand.

Reasons White Smoke is Coming From Your Exhaust

While the presence of white colored exhaust smoke is almost always indicative of water/coolant contamination within one or more cylinders, the cause of such issues can vary at times.

The following are several of the most common causes of white-colored exhaust smoke.

When thick, white smoke is emitted from a vehicle’s exhaust, a blown head gasket is often to blame. This critical gasket creates a seal between an engine’s block and cylinder heads, while also preventing the loss of coolant, oil, and compression.

When a head gasket fails, coolant can seep into one or more of an engine’s cylinders where it is burnt, causing white smoke as a byproduct.

In certain instances, a leaking intake manifold gasket can actually lead to the appearance of thick, white-colored exhaust smoke. This, of course, is only true if your engine’s intake manifold is traveled by water jackets.

Under these circumstances, a failed intake gasket can allow coolant to enter one or more of an engine’s cylinders, posing many of the same symptoms as those associated with a blown head gasket.

A cracked cylinder head can also serve as the root cause of thick, white-colored exhaust smoke.

Similar to that which occurs in the case of a blown head gasket, a cracked cylinder head can allow coolant to flow into one or more combustion chambers, where it is then burnt, creating white smoke in the process. This problem is only corrected through the replacement of the damaged cylinder head.

Though less common, an engine’s block can also crack, allowing coolant to flow into one or more of an engine’s cylinders. Unfortunately, a failure of this type is considered catastrophic in nature, and typically spells the end of the road for the engine in question.

At this point, a motorist must determine whether or not it is worth replacing their vehicle’s engine, in terms of price and downtime.

Is It Safe To Continue Driving?

While driving a vehicle that is emitting white exhaust smoke might not prove extremely dire in every case, it is certainly not advised. As mentioned above the appearance of thick, white smoke from a vehicle’s exhaust indicates that coolant is being burnt, at least to a certain degree. This not only poses the risk of overheating but presents other problems as well.

Anytime that coolant has found its way into one or more combustion chambers, the risk of hydrolock exists.

The term “hydrolock” is used to describe a condition in which a piston is unable to move upward within its respective cylinder bore, due to the presence of non-compressible water inside the combustion chamber. This condition often leads to severe and irreversible engine damage.

In any event, the root cause behind the presence of white exhaust smoke should be diagnosed and remedied as soon as possible. Doing so will prevent the issue itself from progressing in severity, while also minimizing the risk of secondary engine damage.

If you do not feel comfortable tackling such repairs yourself, make an appointment with a trusted automotive service center at the first available opportunity.

Read Also – 7 Causes of Noise When Turning the Steering Wheel