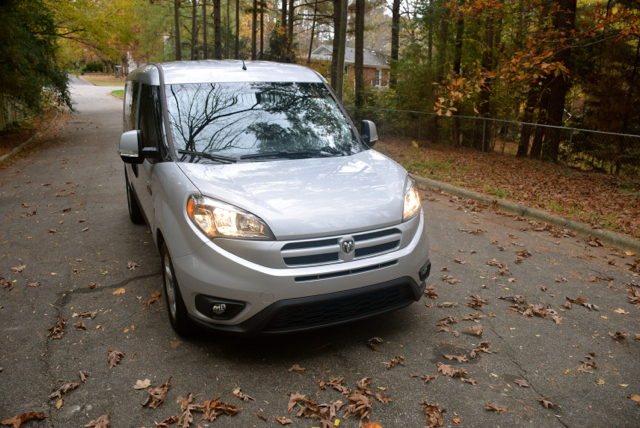 Think “minivan” and the Dodge Grand Caravan and Toyota Sienna are a few of the models that may come to mind. Before the advent of the crossover sport utility vehicle, these small vans served as the primary people movers for more than two decades, stepping in where station wagons left off.

But an odd thing has happened over the years — even as the minivan segment has shrunk, the vehicles represented by them have grown larger and heavier. Thus, models such as the Nissan Quest, Honda Odyssey, Kia Sedona, and the Chrysler Town & Country are more “midi” than they are mini. Tipping the scales at around 4,500 pounds, today’s family vans are among the heaviest vehicles on the market.

The pendulum may be swinging back to smaller vans or at least may be better represented by an emerging category of true minivans. Both Ford and Fiat Chrysler produce such models, vehicles built in Turkey and sent to the United States for upfitting. The Ford Transit Connect and the Ram Promaster City are both available in cargo and wagon versions. Furthermore, Nissan has its NV200 cargo van (also sold as the Chevrolet City Express); the passenger version is sold only for taxi fleets. 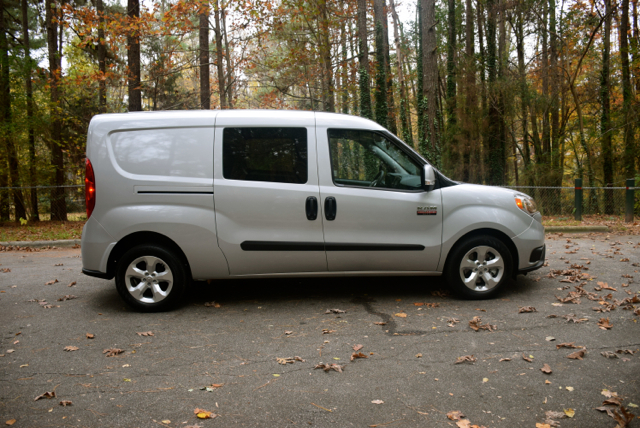 Sales in the small commercial/passenger van segment are nearly nominal, but are growing, averaging more than 7,000 units sold monthly through September 2015, according to GoodCarBadCar.net. That number includes the Ram Cargo Van, a model based on Fiat Chrysler’s traditional minivan models. Sales in this category are up a robust 35.1 percent over last year — the segment is one of the fastest growing in the industry. Whoever said that vans are dead?

Last year, I had the cargo version in my fleet, not expecting a wagon variant to follow. The two models are nearly identical with sliding doors on the sides and 60-40 fold out doors at the rear (an ideal layout for the driver to peer out the back). The difference between cargo and passenger models goes a bit further — where sheet metal covers the second set of rear side windows in the van, they’re exposed in the wagon. Moreover, a 60-40 split folding and tumbling second-row bench seat is added, increasing the standard occupant capacity from two to five. 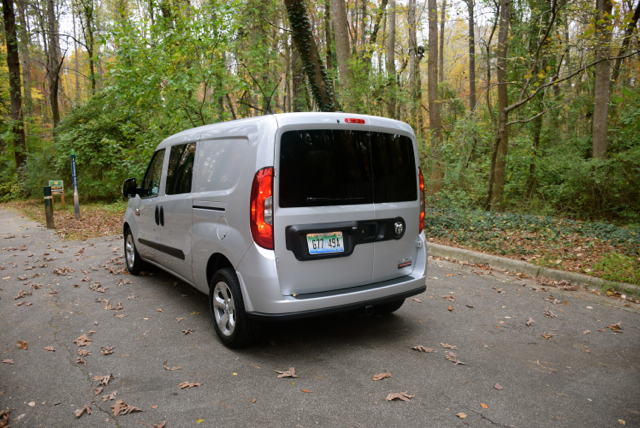 The model at hand is marked by a long, sloping hood with wrap around headlamps, a horizontal upper grille opening, and a larger lower grille or air intake. Embrasures on both sides of the lower grille house the fog lamps.

The Promaster City has slab sides with a long roof that begins to slope after the C pillars, a rising belt line, character lines and trim molding. Vertical handles pivot open the front doors as you find in most any vehicle. Pull the vertical handles on the rear doors and they slide open and move on tracks to the rear of the vehicle. The very last side window panels of the van are covered in sheet metal — unlike the Fiat Doblo and the Ford Transit Connect where they are exposed. Then again, both competing models offer a third-row seat — the rear of the van offers excellent storage room.

To the rear of the Promaster City are pivoting doors augmented by oversized vertical combination lamps. The doors open at a 90-degree angle, then pivots to 180 degrees when the hinge latches are released. This is an ideal design, what enables ease of loading. 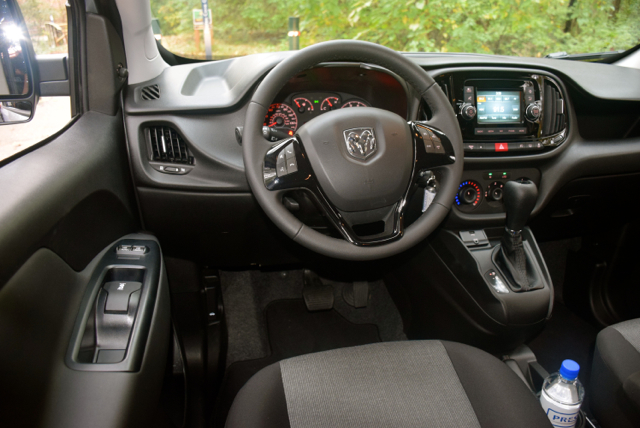 Inside, the cabin seems large on account of the oversized, canted windshield. Trailer type side mirrors with convex lower mirrors make this vehicle seem larger than it is — those mirrors can be hand folded in, as desired.

The instrument panel is composed of a four-analog display — two large dials (tachometer and speedometer) and two smaller dials (oil pressure and fuel gauges) are present. A digital driver’s information center is located underneath the two middle gauges.

Keyless entry, front power windows, a tilt and telescoping steering column, and a basic UConnect telematics system with navigation is present. A tiny 5-inch screen is present and surrounded by switches and knobs to operate the system. Beneath that are driver controls followed by dials and switches to manage climate control. 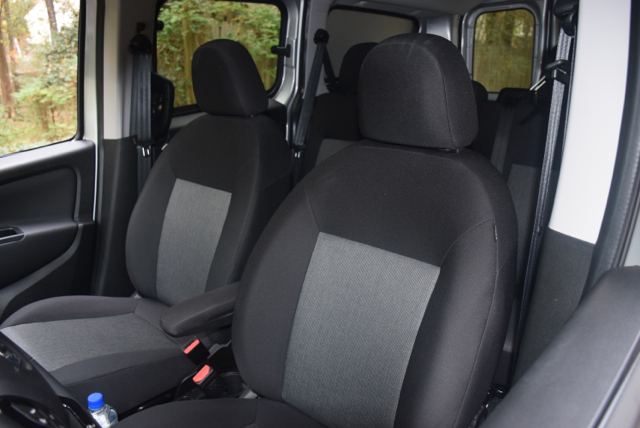 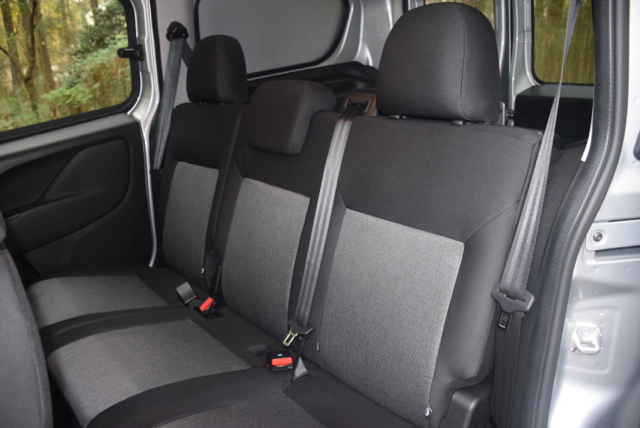 The 2016 Ram Promaster City Wagon is offered in standard ($24,445) and SLT editions ($25,970). Choose the SLT model and you get a leather-wrapped steering wheel, steering wheel-mounted controls, the UConnect system, and manual driver lumbar support. You also have superior quality seat covers up front, and power-heated side mirrors. Pay the extra $1,525 and you’ll have a better equipped, front-wheel drive van/wagon to show for it.

Beneath the climate control dials are the USB and auxiliary input ports. A small change compartment is also present. The transmission stick follows — you can operate it in automatic or manual mode.

Splitting the front seats is an open storage area not nearly large enough to house your smartphone — or at least keep it in place as you drive around. Cup holders at the front and rear of the compartment are separated by a pair of 12-volt outlets and yet another storage area for change. The rear cup holder seems easier to access for rear seating passengers, although the driver’s movable armrest may get in the way.

All four passenger doors have storage pockets and come with drink holders. But the storage I like best is the overhead compartment that is fixed above the dashboard and runs from side to side. Just like the compartments found in commercial vans, it can hold stacks of files. To keep everything from plunging down upon you while you’re driving, a net is also in place. Reading lamps and oversized visors are also present, the latter with a pull out feature to block sunlight. 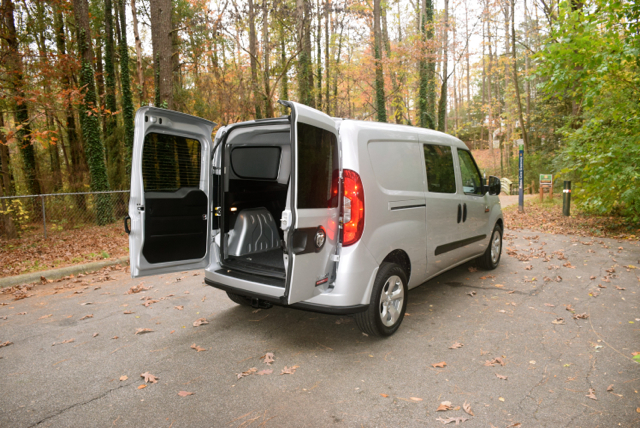 The best feature of the 60-40 split folding rear seat is that they fold and tumble forward. You already have about four feet of cargo room behind the rear seat. When folded, that space expands to nearly six feet. Other than that the rear seats are stiff and lack padding — something your kids probably won’t mind, but something adults may decide isn’t for them, particularly on long trips. The front seats, by the way are only fairly comfortable too — they don’t nail the snugness quotient and may not provide soothing support for long trips.

But for the family that wants a combination of people and an enclosed cargo hauler, the Promaster City wagon does have an appeal. Those rear covered windows mean you can haul items in secret — the rear privacy glass aids in that endeavor. Stack your boxes, arrange your suitcases or bring along your camping gear with no worries. Additional and oversized storage compartments embedded in the sides of the interior along with four tie down rings and a 12-volt outlet are also present.

Under the hood of all Promaster City models is a 2.4-liter, four-cylinder engine making 178 horsepower. It is a motor common to numerous Fiat Chrysler products, including the Dodge Dart, Fiat 500L, Chrysler 200, and the Jeep Compass, just to name a few. It comes paired with a 9-speed automatic transmission, supplied by ZF.

Power is routed to the front wheels and this van/wagon moves forward at a steady clip. There is nothing to wow anyone here, but happily a previous issue with this transmission is no longer present as it shifts through all forward gears without drama. It may take a high rate of speed to finally hit ninth gear, but there is none of the gear hunting found in earlier FCA products equipped with this transmission. 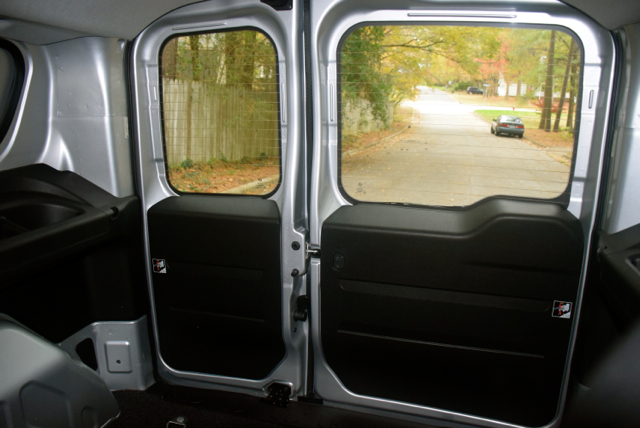 Steering is firm and precise, and you can make tight turns with ease. The ride is comfortable, braking is firm and not once did I feel that the Promaster City was top heavy. Certainly, you won’t look for this model to provide optimum handling on the twisty roads. At the same time the powertrain is up to the task — a 1,883-pound payload and 2,000-pound towing capacity are welcome attributes for this diminutive cargo-cum-people mover.

To sum up, if you’re looking for an affordable people mover with excellent cargo carrying capacity, the Ram Promaster City may be worth a look. At the same time, for nearly an identical price as the small van’s near $30,000 cost, you can find a well-equipped and larger Dodge Grand Caravan with additional convenience features. Furthermore, with the appropriate seats folded flat, the Grand Caravan also offers generous interior storage room along with a more comfortable passenger compartment. On the other hand, the Promaster City’s smaller overall footprint and a 4 mpg edge are two of the most notable reasons for considering the shorter model.