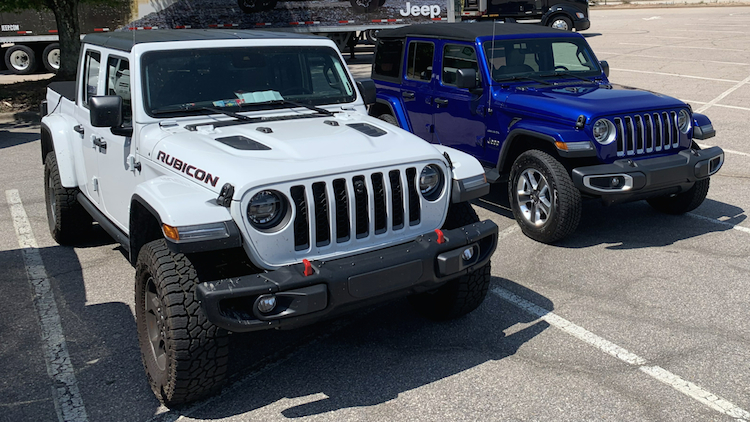 More than a quarter of a century has passed without a Jeep pickup truck, but that extended hiatus finally came to an end this year. The all-new Jeep Gladiator is out, adding yet another model to the expanding midsize pickup truck segment.

You have to go all the way back to 1992 when the Jeep Comanche, this brand’s last pickup truck, was built. The Comanche had a 7-year model run, but demand never reached the manufacturer’s expectations. Indeed, just over 190,000 units were produced for the U.S. market, which meant the automaker was unable to justify keeping the truck around.

Times have certainly changed as both the segment and the brand have evolved to where consumers are giving these trucks a closer look. Notably, sales of the new Gladiator are robust and Jeep is likely to sell as many of its new model in about two years as did the previous one in seven.

Here are some fun facts about the 2020 Gladiator:

The back drama to the new Jeep pickup truck centers on its name. Jeep considered using the Comanche name, but out of sensitivity to the tribe, it decided against this move. Another name, Scrambler, was also considered, but eventually, it was dropped. The Scrambler served as a sub-model to earlier CJ models. As for the Gladiator, Jeep is simply striking out in a new direction, choosing a tough image name to go with its new truck.

The Gladiator’s look is similar to the Wrangler as the two models share the same platform and many components. The two models are nearly identical from the front bumper to the rear roof pillar. The addition of a truck bed is the difference-maker. Like the Wrangler, the Gladiator is available in soft and removable hardtops. You can also remove the doors and fold the windshield, just as you would do with the Wrangler.

Jeep offers the Gladiator in Sport, Sport S, Overland, and Rubicon trims. The Rubicon is the off-road maven of the four and is the same top trim offered on the Wrangler. According to Jeep, you’ll get a four-wheel-drive transfer case with special gearing for low-speed off-roading, Fox shock absorbers, locking front and rear differentials, a disconnecting front sway bar, larger fender flares, and muscular all-terrain tires. Rock crawling, anyone?

Well, to begin, the 2020 Gladiator offers just one engine: a 3.6-liter V6 with 285 horsepower. This one works with either a six-speed manual or an 8-speed automatic transmission. But it won’t be the only engine for long as Fiat Chrysler’s 3.0-liter turbo-diesel V6 will roll out later. It’ll work with the 8-speed transmission too. Look for exceptional fuel economy and pulling power once it debuts.

Depending on how this truck is equipped it carries a two rating ranging from 4,000 to 7,650 pounds, the latter rivaling the top-end of the segment. Dana 44 solid axles front and rear, coil springs everywhere, and a rear suspension borrowed from the Ram 1500 makes this one robust truck. Payload varies from 1,105 to 1,700 pounds.

The four-wheel-drive-only Gladiator is one heck of a stout model. You’ll find 10 inches of ground clearance (11.1 inches in the Rubicon) as well as stellar approach (40.8; 43.4 degrees Rubicon), break-over (18.4; 20.3 degrees Rubicon), and departure (25; 26 degrees Rubicon) angles. Clearly, the Jeep Gladiator has superior off-road credibility than competing models, including the Chevrolet Colorado, Nissan Frontier, Ford Ranger, and GMC Canyon. The Toyota Tacoma TRD Pro may be its strongest competitor.

Jeep: There’s Only One

Along with the Wrangler, the all-new Gladiator represents the best of all things Jeep. It blends iconic styling with modern touches to deliver a truck that won’t be mistaken for anything else. By no means is it perfect — the starting price is much higher than competing models and the top-end pricing blows past $50,000. You also have to pay for certain driver-assist equipment included by its competitors, namely adaptive cruise control. All in all, the Gladiator does what it needs to do to meet pent up demand and make a case for itself in the pickup truck market.