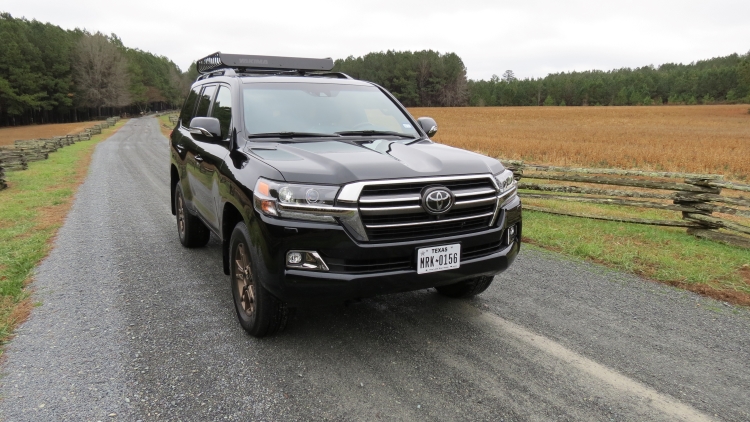 In the world of SUVs, the Toyota Land Cruiser is a rare breed. This traditional body-on-frame utility vehicle is designed to handle the most rugged terrain. But it also delivers around-town comfort, putting it within an exclusive family of luxury models.

That dichotomy makes the Land Cruiser so unusual. Few mainstream models dare to compete against loftier brands, but then the Land Cruiser predates most. Indeed, the forerunner of this four-wheel-drive vehicle rolled out in 1951, evolved, and has stayed in production since. More than 10,000,000 units have been built with distribution scattered across the globe.

The current U.S. version dates to 2007, but has benefitted since with significant changes made in 2013, 2015, and again in 2020. This year, a limited-edition Heritage edition is in place, marking the 60th anniversary of the introduction of the FJ40, which is largely recognized as the spiritual successor to the current model. The Heritage is a five-seat SUV and only 1,200 units are available in the U.S. this year.

Adding the Heritage trim effectively doubles the Land Cruiser’s model offerings. Besides eliminating the third-row seat, the Heritage drops the running boards, adds BBS 18-inch wheels, and brings in a roof basket. Access to the cargo area is still the same employing a split power-controlled tailgate: the top part lifts; the lower part drops down.

The Toyota Land Cruiser is a throwback, at least with its design. Despite modern touches such as LED lights, daytime running lights, a power moonroof, power tailgate, and alloy wheels, the canvas ties in well with earlier models.

Happily, Toyota doesn’t skimp on the details either, as it includes fog lamps, a roof rack, heated side mirrors, a rear spoiler, chrome embellishments (except on the Heritage edition), and aluminum running boards on the standard model.

Inside, the cabin is swathed in leather, which covers the seats, wraps the steering wheel, and tops the transmission shifter. Soft-touch materials, wood grain trim, and limited use of hard plastics in out-of-the-way places are other features of note.

The Land Cruiser comes with full power accessories, including a power-controlled tilt-and-telescopic steering column. Four-zone climate control is standard as is a cooler box between the front seats. The front seats are thick and all-day comfortable and come with heating and cooling control. The driver seat has 10-way control with lumbar support, while the passenger seat delivers 8-way control.

The second row 40-20-40 split-bench seat slides, reclines, folds, and tumbles. The outboard positions are heated. In models with the third-row 50-50 bench seat, that one folds flat as well. 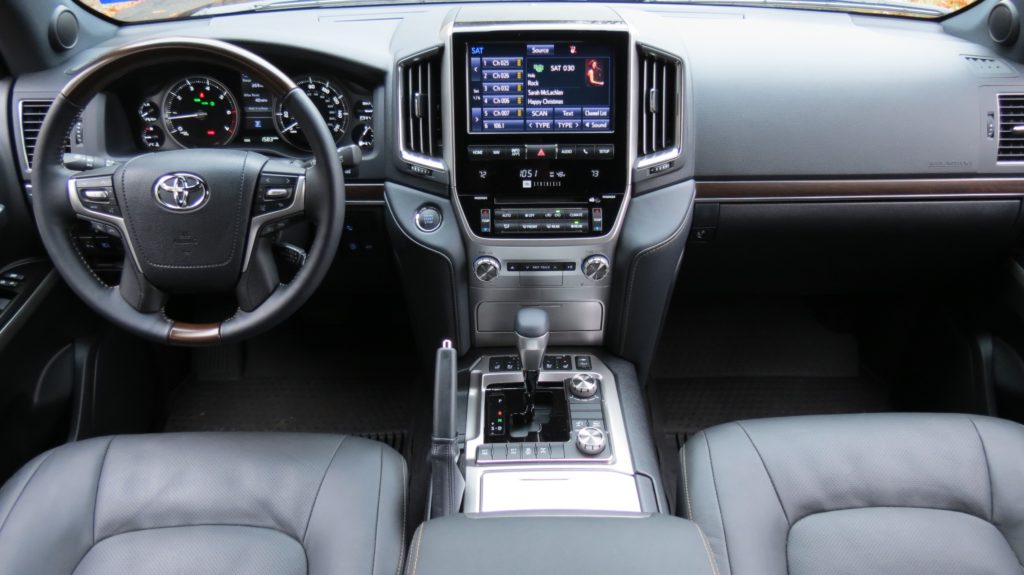 Sadly absent is smartphone compatibility as neither Android Auto nor Apple CarPlay integration is available. This fact stands even as more Toyota and Lexus products integrate the two systems, especially the latter.

However, Toyota’s version of active lane control – lane tracing assist – isn’t included. And although crash tests haven’t been conducted, we’re confident that the Land Cruiser’s mass makes this vehicle a whole lot safer than most any small car.

Under the Hood and Off-Road

Powering every 2020 Land Cruiser model is a 5.7-liter V8 engine. This engine works with an 8-speed automatic transmission and outputs a robust 381 horsepower and 401 pound-feet of torque. Moreover, it has an “old school” feel to it and supplies the accompanying roar of a big V8 under hard acceleration.

The Land Cruiser’s four-wheel-drive system uses a TORSEN limited-slip locking center differential and a two-speed transfer case with a selectable low-range. When locked, the rear wheels turn in unison, regardless of traction. The transfer case aids in off-road chops, enabling the Land Cruiser to tackle the toughest terrain, including mud, which is where low transmission gearing comes in. These features underscore the Land Cruiser’s legendary status.

A solid rear axle and a ladder frame are two attributes particular to the Land Cruiser. It’s what enables this model to shine off-road, although it also means the Land Cruiser is bouncy around town, outmatched by the unibody design of the Mercedes-Benz GLC, for instance. Further, the steering is light to the touch, not especially weighted, and lacks the feedback we’d prefer.

Yet, once taken off-road, the Land Cruiser is in its element. It’s one of the few models that isn’t a Jeep Wrangler that also isn’t afraid to tackle the most challenging terrain. Sadly for us, our favorite trails at Uwharrie National Forest were closed for the winter, the same place where we navigated a Wrangler four-door last summer.

Still, there were plenty of other options nearby which weren’t as lengthy, yet were still challenging. Happily, the Land Cruiser responded with ease, with every approach, breakover, and departure angle tested with frequency. On one stretch of muddy terrain, the low-speed gearing proved its mettle. Essentially, the only difference between the Jeep and the Toyota is in its size as there are trails where the latter is too wide or at least should be outfitted with additional gear, including brush and light guards to protect vulnerable areas.

We’d be remiss if we omitted two other points about the Land Cruiser. First, this SUV pulls up to 8,100 pounds, when properly equipped. Thus, the Toyota keeps up with other big SUVs, including the Ford Expedition and Chevrolet Tahoe. Second, the Land Cruiser has a 24.6-gallon fuel tank. That’s a large hold, but also necessary as this SUV consumes gas with abandon. Fortunately, you’ll fuel up with regular grade instead of premium fuel, thus managing your costs somewhat.

The only package available is a rear-seat entertainment system ($2,200). This one comes with the standard model only and includes a pair of 11.6-in display screens, RCA jacks, HDMI input, a remote, and two wireless headphones.

In all, the Land Cruiser delivers maximum trail-tackling fun, along with a relatively upscale cabin. Yet, it doesn’t match the interior detailing of select BMW and Land Rover models. For that reason, the Lexus LX delivers the full amenities to take on the top tier, although its lower bumpers mean it cannot match the Land Cruiser’s off-road chops.

3 thoughts on “Spotlight on the Toyota Land Cruiser Heritage Edition”