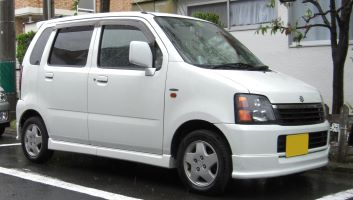 A kei car from Suzuki in Wagon R guise.

Suzuki is a Japanese automotive brand that is known for its cars and motorcycles. But it is their smaller vehicles that get the most attention worldwide. Suzuki makes a few kei cars like the Alto and the Wagon R that attract a lot of attention from the middle and lower-middle class. These vehicles have been around for decades, and they are performing admirably in several Asian markets.

The Suzuki Wagon R, specifically, is a more recent model as it has been around since 1993. The car has gained traction in recent years for its practicality, durability, and cost-effectiveness. When the first-generation model came out, buyers were a bit skeptical, thinking that another kei car would not do well in the market. However, the Wagon R succeeded against all odds, especially because it shared a lot of its components with the prosperous Alto.

The Suzuki Wagon R is now in its sixth generation and it is going strong. The manufacturer might just eke out a few more generations before bidding goodbye to the small passenger car.

The Suzuki Wagon R is a budget passenger vehicle. Therefore, it does not have any sporty styling or aggressive lines on its exterior to woo the customer. There are no flashy headlights, spoilers, or luxury options. The Wagon R looks like an ordinary vehicle that would blend in with the other cars on the road and would not be noticed twice.

The designers at Suzuki went with that approach and designed a car that slightly resembled that years Suzuki Alto. The large and simple headlights, taillights and side mirrors offered nothing exciting to the customer. That’s because the main USP for the Wagon R was its practicality, and it performed brilliantly in that department.

The designers tried to refine the aesthetics a little bit in the second generation by making a few changes to the front and rear end of the vehicle. The changes were not that radical, but you could tell the new model apart from its predecessor.

More changes followed in the third and fourth generations that made the Wagon R a more appealing passenger car. The minor upgrades were even more pronounced with the fifth and the latest sixth generation. Now, the Wagon R looks much more attractive than it did when it first came out decades ago. The new dominant exterior shows a lot of character compared to previous models.

It is not every day that a company designs an engine. They usually use the same powertrain in various vehicles depending on the need. Suzuki used the same set of 660cc engines for the Wagon R that they did for the Alto. The F6A and the K6A engines were offered with a choice of either a 3-speed or 4-speed automatic and a 5-speed manual.

The options remained the same in the second generation.

It was only by the third generation that the folks at Suzuki ditched the outdated F series engine and stuck with the efficient K-series. Things remained the same until the start of the 2010s when the new R series powertrain went into the Wagon R. The R06A was mated to either a CVT or a 5-speed manual. But the inclusion of the CVT changed the Wagon R’s dynamics.

This is the same efficient engine that is in the Wagon R’s current generation. You can get one with a turbo installed for that extra boost.

The Suzuki Wagon R is a kei car, meaning it doesn’t have enough power to impress you, but you will find sufficient performance for a daily drive. The vehicle does not feel underpowered or lethargic when you accelerate. In other words, highway driving should not be a problem, and you would be able to manage merging into fast-moving traffic.

In terms of handling, you will not have any complaints with the Wagon R. It is a small car which means it has nimble handling and it manages corners like a breeze. You will not find any difficulty making turns thanks to the wide steering angle and the potent power steering. The biggest advantage is the CVT gearbox that offers lightning-fast shifts and proper performance delivery. As a result, you get a fuel-efficient drive that is smooth and effortless.

The Suzuki Wagon R is the ideal car for a small family or for people who live in busy cities. It is affordable, practical, and fuel-efficient. In short, there is a lot to like about the Wagon R, which is why it is successful in developing countries of Asia.

See Also — What is the Suzuki Alto?