You are here: Home / Auto Shows / Nissan: Out With Juke, In With Kicks

Strange looks aside, the Nissan Juke was a fun little crossover, one of the first models of its kind. Since its 2011 debut, nearly every manufacturer has jumped in and with designs much more subdued than the idiosyncratic Juke.

Fast forward to the 2017 Los Angeles Auto Show and the Juke’s replacement has dropped cover. Where the Juke stood out, but not necessarily for the best reasons, the 2018 Nissan Kicks is relatively subdued. Indeed, the new model isn’t really a surprise as Nissan has been kicking around a Kicks concept since 2014. Moreover, we also knew it would eventually replace the Juke, although the name change wasn’t a given.

The 2018 Nissan Kicks will make its debut late next spring, taking over the slot abandoned by the 2011-2017 Juke and sitting just underneath the Rogue Sport. Nissan’s remaining utility vehicle lineup includes its best-selling model, the Rogue, followed by the Murano, Pathfinder, and Armada. The Kicks’ front fascia takes the familiar Nissan look with its horse-collar grille, then successfully boils it down to a manageable size. Other standout features include sleek wraparound headlamps with LED accents, distinctive character lines, body sculpting, and a “floating” roof.

Inside, the 2018 Kicks offers room for five and does so despite its coupe-like roofline. The dashboard features a “Gliding Wing” design punctuated by a 7.0-inch full color display. Owners can also access the internet by means of a NissanConnect interface. Beyond the base model, you’ll also find Apple CarPlay and Android Auto smartphone compatibility. Engine, Transmission and a FWD Drivetrain

Available in S, SV and SR grades, all models have a 1.6-liter four-cylinder engine, generating 125 horsepower and 115 pound-feet of torque. This front-wheel drive only model comes with a continuously variable automatic transmission and should deliver a combined 33 mpg — that’s up substantially over the Juke and its 29 mpg rating.

The front-wheel-drive-only drivetrain may seem like a curious move in addition to not offering a manual gearbox. But there is some precedent here: the all-new Toyota CH-R is also front-wheel drive only and it, too, comes with a CVT only. That said, Toyota may roll out an all-wheel-drive version and could very well surprise us with a manual gearbox. Thus, it is entirely possible that there will be more to the Kicks than what we know — if not in 2018, at a later date.

Besides the Toyota, other Kicks competitors include the Mazda CX-3, the upcoming Ford EcoSport, Honda HR-V, Jeep Renegade, Fiat 500X, and the Chevrolet Trax. Other manufacturers will jump into the market, which is the fastest growing crossover segment. 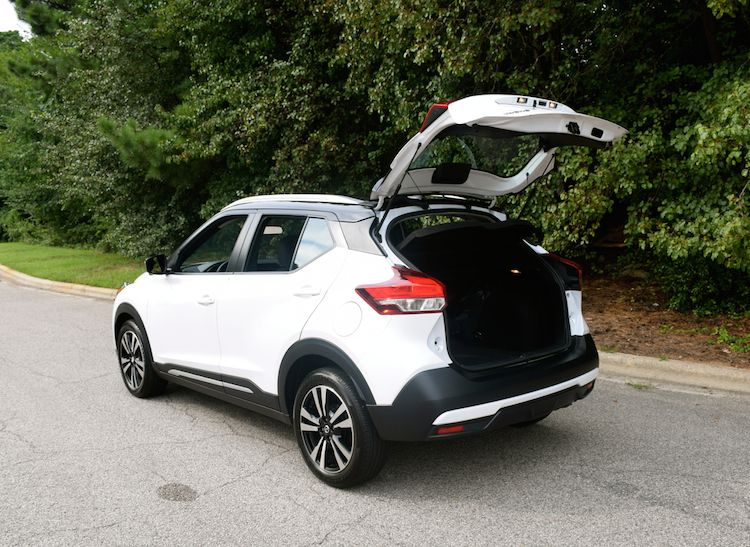 In all, the 2018 Kicks offers a strong price point for a small vehicle, especially a crossover. With this in mind, we think the Kicks will attract new customers and perhaps outsell the Juke right out of the gate.