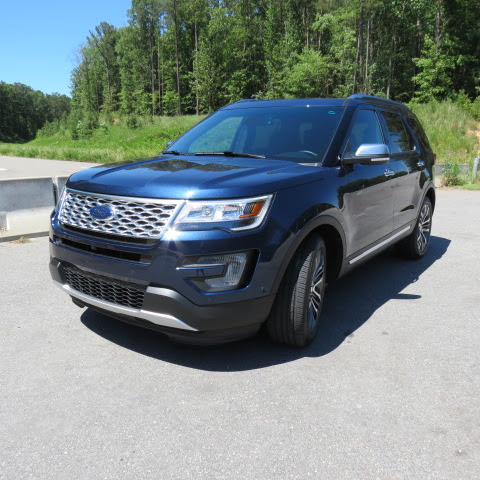 Ford’s strength in utility vehicles is evident as nearly every model it offers is a hit. Even the quirky Ford Flex has an audience, people who prefer a more wagon-like experience and are not put off by its polarizing visage.

And then there is the Ford Explorer, a utility vehicle once offered as a traditional body-on-frame SUV, but now built exclusively as a crossover model. It hasn’t matched the sales strength the earlier model reached in the 1990s, then again there have never been quite the number of SUVs offered by Ford as there are now — five. Ford shows six models on its website, but the Transit Connect is more minivan-like than a utility vehicle. More models are on the way, keeping with an important auto trends of our time.

As before, the Ford Explorer is a midsize SUV. But it is one of three models offered by Ford in this segment — the five-passenger Edge and the six-passenger Flex are the other two. With room for up to seven, the Explorer offers the logical step up to the full-size, eight-passenger Expedition, the only model still based on a truck platform, sharing its mechanicals with the F-150 pickup truck. The fifth model is the Ford Escape, a compact SUV with room for five.

Since its 2011 introduction, the current-generation Ford Explorer has been well received and has undergone trim level and equipment shuffling since. For 2016, the base 2.0-liter, turbocharged four-cylinder engine has been replaced by a slightly larger turbo displacing at 2.3-liters.

The other two engines are both V-6s and displace at 3.5 liters. One is naturally aspirated, the other offers the same EcoBoost or twin-turbocharged technology found in the four cylinder. Across the board, each engine is paired with a 6-speed automatic transmission with manual shifting capabilities.

Another change for 2016 was the addition of a top-of-the-line Platinum series, a model dressed similar to a Lincoln product, with multi-contour front seats, real wood and aluminum appliqués, a dual-panel sunroof, a 500-watt Sony audio system, and 20-inch painted machine-faced aluminum wheels.

The Ford Explorer Platinum immediately followed a Lincoln MKX SUV in my fleet rotation and that may have been a huge mistake on the Ford Motor Company’s part. I found the Explorer’s interior more elegant than the Lincoln, especially with the dashboard covered in stitched leather. On the other hand, the Lincoln product had the more desirable of the two massaging features. Yes, even the Explorer Platinum will knead your back while driving and do likewise for the front passenger.

Choose the XLT model and you obtain MyFord Touch as an option. This system utilizes Bluetooth wireless technology to transfer information between your smartphone and the vehicle.

The Sport edition adds flair to the model line and also has the larger turbo engine. This model is equipped with four-wheel drive, and includes a dual-tip exhaust system, and 20-inch machine-finished wheels.

Of course, manufacturers typically treat media folk such as yours truly to the top-end models. But not always — in 2014 four separate editions of the Jeep Grand Cherokee were served up, giving me an excellent opportunity to sample a wide variety of models. As a rule, I don’t automatically recommend top-end models. Typically, I encourage buyers to look at the mid-grade models and add whatever packages they want.

Robust Towing and Then Some

For the Platinum, Ford goes all out in what you can possibly receive. I mentioned most of the offerings earlier, but there are few other highlights worth amplifying.

For starters, the Explorer Platinum can pull up to 5,000 pounds. But only with a Class III trailer tow package. The package is standard at this level. You also receive a 110-volt outlet, a blind spot information system with cross traffic alert, a heated steering wheel, a power tilt and telescoping steering column, power-adjustable pedals with memory, and a leather-wrapped steering wheel with cruise control.

There are a few options offered, even at this level. A second-row console ($150) is one option, as is second-row bucket seats ($695). My test model had both. You can also opt for various paint schemes such as ruby red metallic clear coat or white platinum metallic tri-coat paint. For the test model Ford kept things standard, delivering a “Blue Jeans” paint scheme that can pass for a police pursuit vehicle. At this level no other options are offered. Fully optioned, you’ll pay about $56,000; my test model came in at $54,670.

I’m glad Ford delivered an Explorer outfitted with the larger turbo engine. I found the 2.7-liter turbo in MKX sufficient, but the lag was also more apparent. I wonder how much “oomph” you achieve with the turbo four which delivers slightly less horsepower than the standard V-6, but also offers a 20 percent edge in torque. Torque kicks in once you are moving and is especially propitious for climbing hills and towing. Nevertheless, the compact engine provides just 3,000 pound of towing capacity compared to the 5,000 pounds both V-6 engines deliver.

The EcoBoost V-6 operates on the order of a V-8 engine with copious amounts of power delivered off the start and throughout the band curve. It is the most popular of the Ford EcoBoost engines, but it isn’t as thrifty as you might think. Indeed, by the time I hit 240 miles, the fuel warning light lit, telling me I had only 50 miles left before I ran out of gas. That means my fuel economy was somewhere in the 16 mpg range, not what you’d expect from a a V-6.

The Platinum and Limited series are equipped with a 4×4 system, unlike the available all-wheel drive found elsewhere. The difference here is the 4×4 system can handle a variety of off-road conditions, including sand, mud, rocks, and such. It may not be as rugged as you would find in a Jeep, but it is superior than the all-wheel drive systems common to the segment.

Kudos to Ford for finally fixing a distressing problem, namely the infotainment system. SYNC has been a competent operator since its 2008 inception in the Ford Focus, but the MyFord Touch system with its complicated touch screen wasn’t enjoyable. Indeed, the Ford system is one among several that are routinely criticized by consumers for its difficult use. The previous problem has been largely rectified by making the screen intuitive while including the still necessary knobs and switches to intervene. The directions given were accurate and clear, even as I chose to give “touch” inputs instead of the available voice controlled option.

Room for Six or Seven

As far as the interior room, the Explorer provides excellent room for four or five and adequate room for six or seven. The last row offers a two-seat placement, ideal for your youngsters, but not for adults. The seats sit side by side, so hip room is restricted. Leg room is also tight. The Explorer rides on a 112.6-inch platform compared with the 112 inches for the Edge. Adding another six inches between the wheels would make the third-row seat more usable for adults.

The nifty fold and tumble third row seat arrangement is a strong suit here. When activated, switches on the cargo department wall on the driver’s side cause the seats to fold forward or flip and fold into the wheel well. And even with the seat hidden, Ford did make room for a donut spare — no worrisome electronic tire inflator to mess with here.

In all, the Ford Explorer offers a exceptionally competitive model in a crowd-pleasing segment. Nearly every manufacturer has a presence, so you’ll want to cross shop the Ford with the following conveyances: Nissan Pathfinder, Dodge Durango, Mazda CX-9, Honda Pilot, Chevrolet Traverse, Hyundai Santa Fe, GMC Acadia, Toyota Highlander, Kia Sorento, Volkswagen Atlas, and the Buick Enclave. The Jeep Grand Cherokee is yet another model, although this SUV offers room for only five.