On the road with a premium mainstream sports sedan.

The car segment is under assault with consumers preferring crossovers in greater numbers as the reason for the shrinking demand. Indeed, overall car sales (coupes, sedans, and wagons) fell by 8.1 percent in 2016 in a passenger vehicle market that rose by a net 0.4 percent.

Manufacturers have no plans to abandon the segment en masse, although the Chrysler 200 is one recent casualty in the market (the Mitsubishi Galant is another). In any case, the mainstream segment has long been led by the Toyota Camry with the Honda Accord, Nissan Altima, and Ford Fusion among the top sellers.

The Mazda Mazda6 (Mazda6 from this point forward) competes in this segment and typically battles lower-tier sellers such as the Volkswagen Passat for positioning. The Hyundai Sonata, Chevrolet Malibu, and Kia Optima are other models to consider.

One model rarely mentioned due to its premium status is the Buick Regal, a slightly smaller sedan that could very well be the best vehicle to consider when comparing one to the Mazda6. For it is the top-trim Grand Touring model that pulls out all the stops, supplying numerous upmarket enhancements, including a head-up display and leather interior at the top-trim level. In this example, the Grand Touring edition matches well with the Regal. 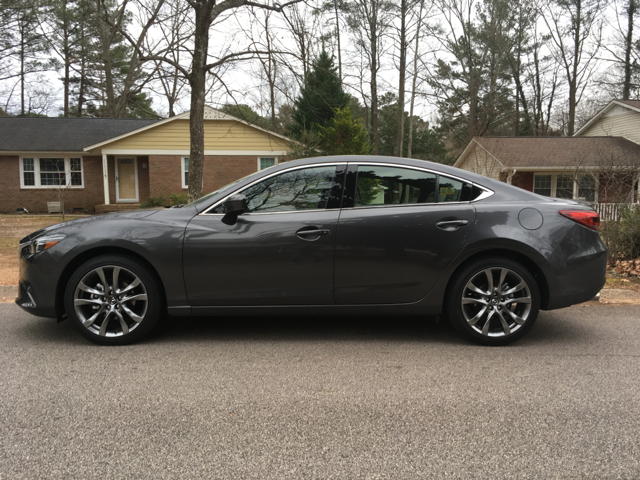 Package shuffling is evident elsewhere, including the addition of a backup camera and Mazda Connect infotainment system to the base model. On the Touring model, you’ll now find smart city brake support technology along with automatic on and off headlights, and rain-sensing wipers. Additional safety and technology features accompany the Grand Touring edition. 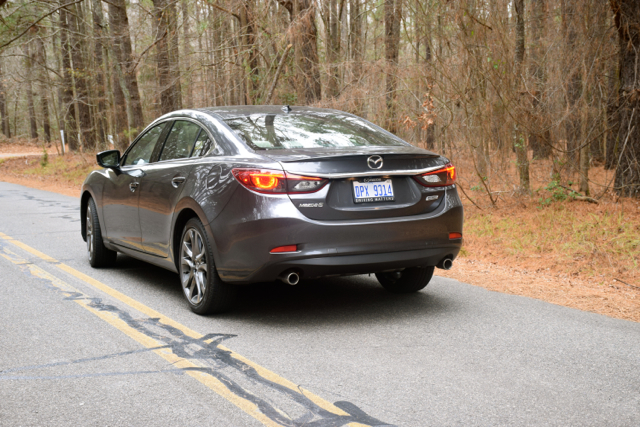 Although I would have been happy to drive a Mazda6 paired with a six-speed gearbox, Mazda sent a Grand Touring edition my way. So, no stick.

I wasn’t disappointed as I chose to focus on the positives and there were many to consider. Notably, the exterior design is simply phenomenal — at the risk of sounding like a Mazda sycophant, I must say that the complete design is stunning — from the trapezoidal grille to the bolstered shoulders and all the way back to the rear deck, the lines on the Mazda6 are a joy to behold.

Mazda calls the design “soul of motion” or KODO — what represents a design formulation peculiar to the brand. KODO places an emphasis on a vehicle’s elements and then adds what Mazda describes as “self-restrained dignity and sensuality.” The idea here is to connect with people on an emotional level — in my opinion, the Mazda6 is wildly successful here.

But the luscious exterior design doesn’t stop there. It extends to the interior where you’ll find sculpted lines across the dashboard, on the door panels, and across the seats. There is nothing utilitarian about the Mazda6’s interior. Especially in the Grand Touring level where you’ll find liberal use of Nappa leather and high-end material throughout. This is where a comparison to the Buick Regal is warranted — and I think the Mazda has the better interior of the two. 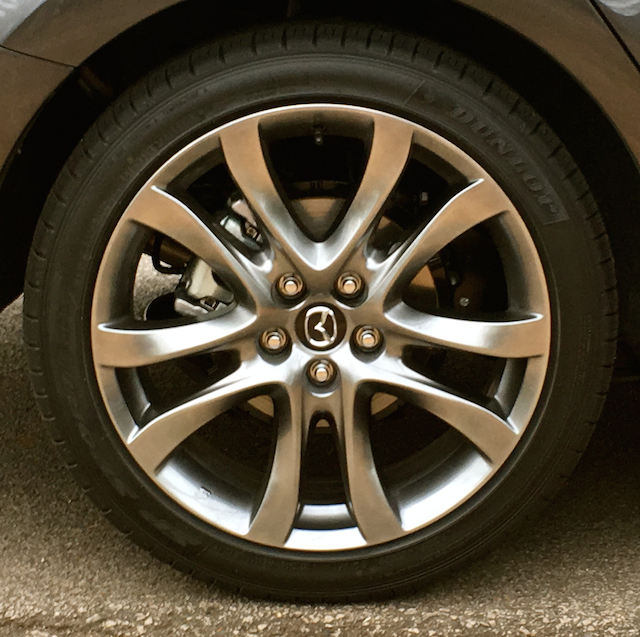 I give Mazda high marks in all things technology, particularly with the Grand Touring edition. Here, you get a few features not available elsewhere, including a head-up display, an automatic dimming rearview mirror with Homelink, and a delicious Bose 11-speaker sound system.

The head-up display projects through a small, translucent screen that sits on top of the dashboard directly in front of the steering wheel. By no means is it in the way. This is the first time I’ve seen such a screen used — typically, the screen sits face down on the dash with the image projected from the screen.

Mazda’s infotainment/navigation screen is one of the best I’ve seen apart from a luxury model. The screen sits on top of the lower dash next to the ignition button. I like the maps as well as the detailed charts — the screen pinpointing the number of GPS satellite serving the car held my attention, especially as it shifted from 10 to nine and back again. You could “see” where they were located in the sky and see individual bar scores and an accuracy grade. Honestly, I wasn’t sure what each readout meant, but gosh, it certainly serves as eye candy for tech geeks.

All models come with Bluetooth, two USB ports, an auxiliary audio port, and a multifunction command controller. A rearview camera is standard and every model is equipped with a seven-inch color display. 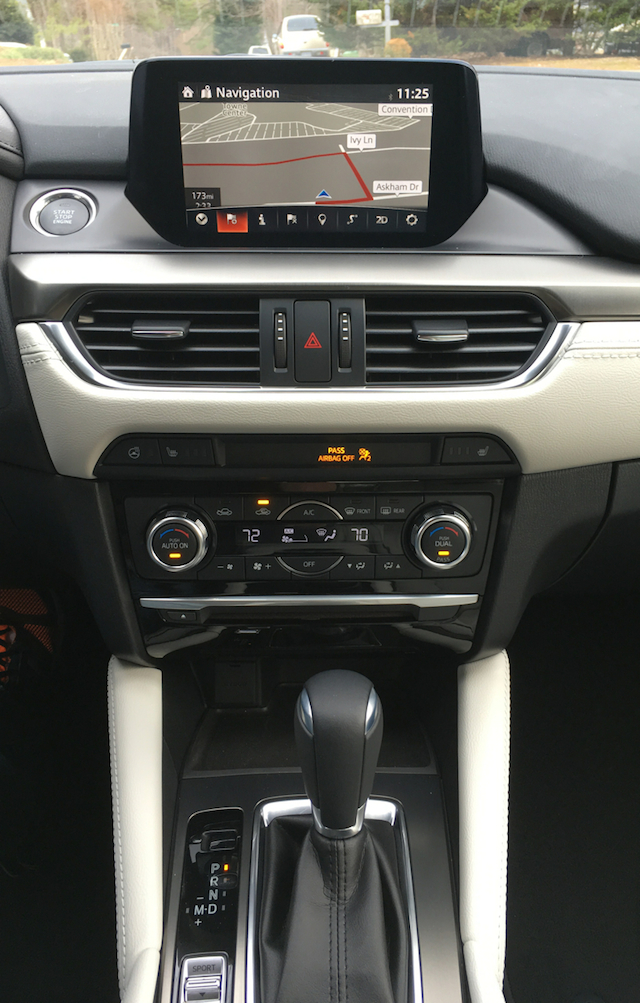 We’d be remiss not to look at safety features, given how important this is to today’s new-car buying consumers.

For the fourth consecutive year, the Mazda6 is an Insurance Institute for Highway Safety (IIHS) Top Safety Pick+ recipient, the highest award bestowed by the institute, which is funded chiefly by the nation’s top insurance companies.

The award this year is even more significant, given that the IIHS upgraded its standards to include headlight illumination. Here, the Mazda6 performed just average, but that’s not bad given that many other models tested had failed in this new scoring category. Only a “failing” grade here would keep a model from claiming the top score. 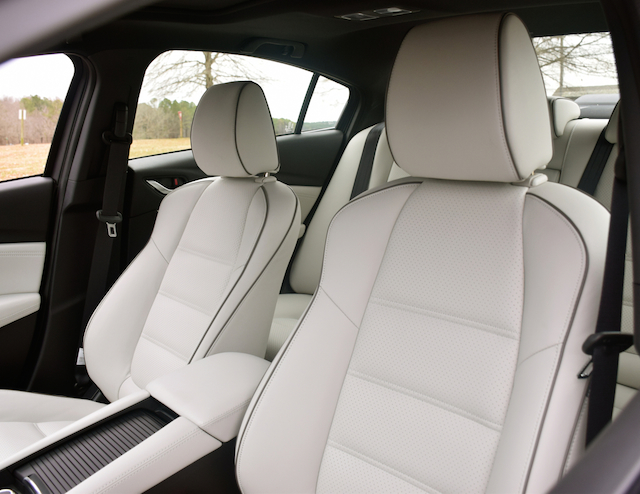 Mazda offers just one engine with the Mazda6 — a 2.5-liter four-cylinder making 184 horsepower and 185 foot-pounds of torque. This high-compression engine squeezes out more power than similar-sized engines from Honda and Chevrolet, but manages to do so without having an adverse effect on fuel economy.

Models paired with an automatic transmission are currently EPA-rated at 27 mpg in the city and 35 mpg on the highway. If you are familiar with the model line, then you know past models were rated as high as 40 mpg, but the EPA recently recalculated fuel economy to better reflect real-world conditions according to USA Today.

Press hard on the accelerator and the Mazda6 moves away from a dead stop with authority. The engine steadily picks up speed and the transmission shifts just when you expect it to. Performance is adequate, but nothing more. Handling is balanced, the ride is smooth, and braking is firm.

What the Mazda6 lacks is either a turbo four or a naturally-aspirated V6. Most competitors offer at least two engine options (the Ford Focus offers three). Unfortunately, Mazda only offers an all-four-cylinder lineup, essentially mandating a “take it or leave it” policy when it comes to its cars. That means both the Mazda6 and the three-row CX-9 SUV rely on four-cylinder engines. So, if you want performance, you’ll need to look elsewhere. 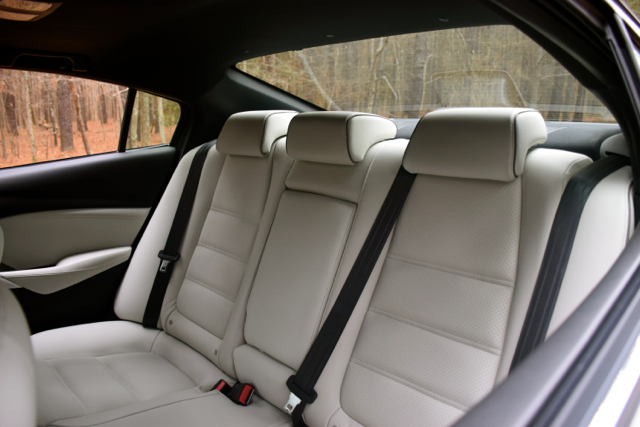 To get the top end Mazda6, you’ll pay about $35,000 for a Grand Touring edition. That’s about as high you’ll go in this segment, but you’d also typically be supplied with all-wheel drive (Fusion Sport) or a V6 engine (e.g., Toyota Camry, Honda Accord or Chevrolet Malibu).

With the Mazda6 Grand Touring edition and its chief competitors, you will need to carefully compare interiors as well as amenities. The Grand Touring edition comes in at a lower price than the Buick Regal, but you don’t get an all-wheel drive option. What you do have is a roomier interior, one with no-compromise space for five and the jaw-dropping looks that simply make the Mazda6 one worth including on your upscale midsize sedan shopping list. 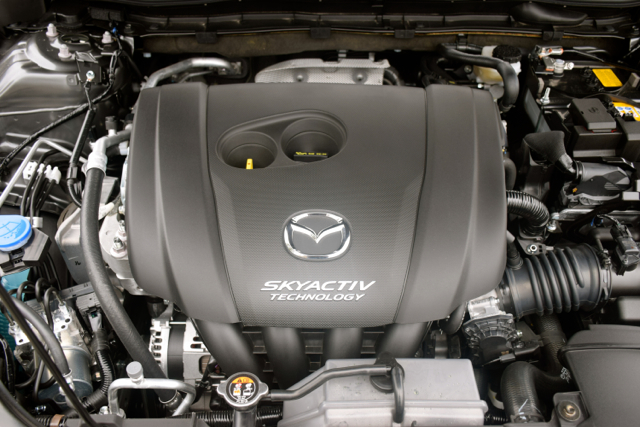