Chevrolet’s Equinox remains a strong seller and that’s quite a feat in a segment dominated by popular compact crossover utility vehicles. Now in its third generation, the 2020 Equinox features more standard driver-assist safety tech. On the other hand, Chevrolet ended its brief experiment with an optional turbo-diesel engine, the lone model in this segment with one.

The 2020 Chevrolet Equinox is priced from $24,995 for the base L model with front-wheel drive to as much as $36,895 for an all-wheel-drive Premier edition with the upgraded engine. Prices include a $1,195 destination charge. As of this writing, Chevrolet’s discounting topping $4,000 covers some trims, but not on the base model. 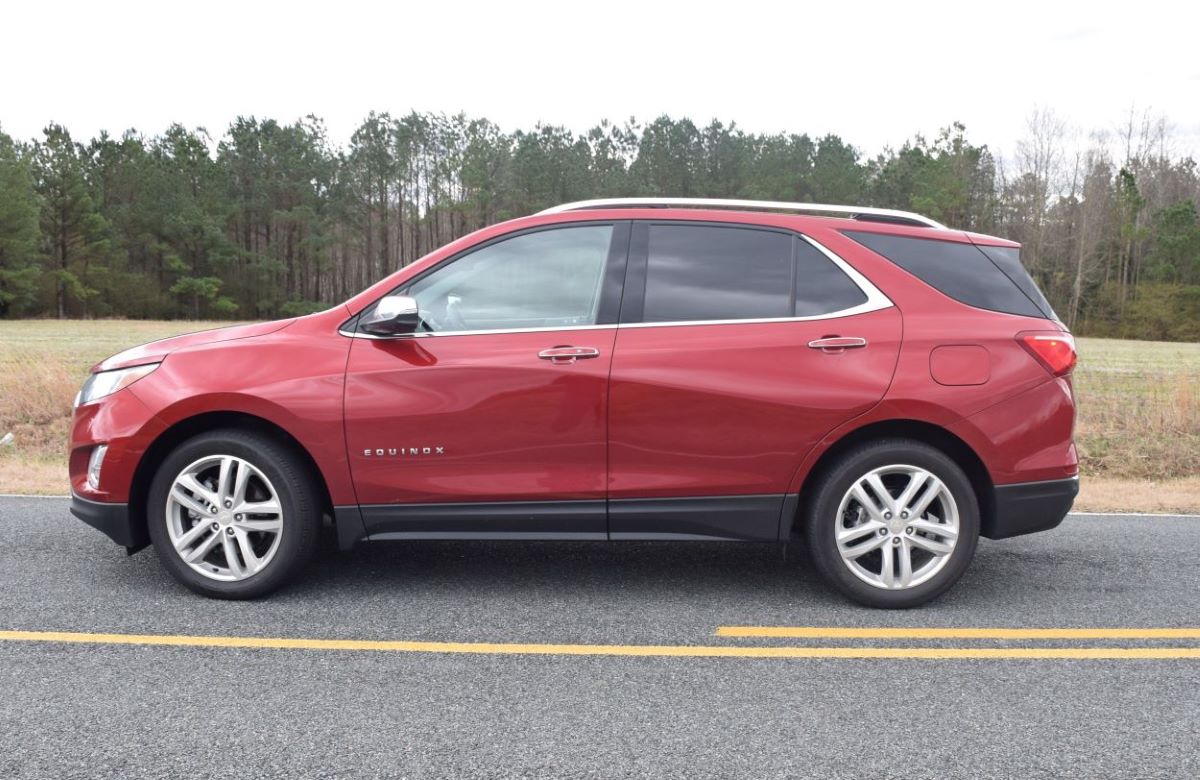 The Chevy Equinox won’t win any beauty awards, but then it doesn’t offer a polarizing design. It aims for the middle, where the majority of shoppers are likely to look.

Chevrolet positions the Equinox between the Trax and the Blazer. The former has a more toy-like appearance, while the latter takes some of its styling cues from the Camaro. As for the Equinox, it does without those aggressive touches.

From bumper to bumper, the 2020 Equinox offers a relatively smooth layout with Chevrolet’s recognizable broad grille dominating the fascia. Its body lines are barely noticeable and the same can be said for most of its sculpting. 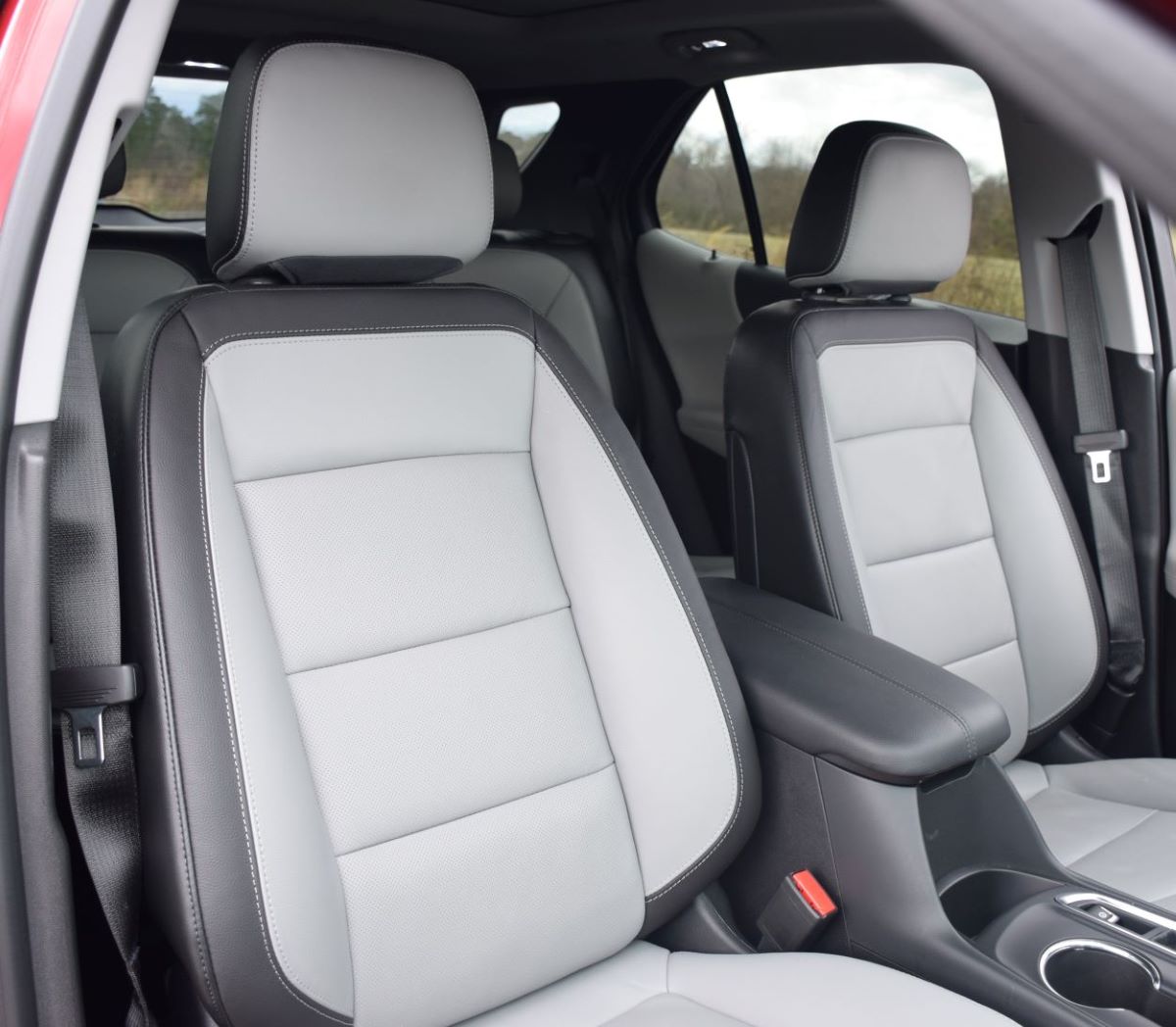 Five can sit inside the Equinox, although four people is the ideal. The cabin is roomy and bright with lots of space to maneuver up front. The rear split-fold bench seat isn’t nearly as supportive as the front seats, yet they’re comfortable. The Equinox offers 29.9 cubic feet of cargo space behind the second-row seat or 63.9 cubic feet with the rear-seat folded. These numbers are below average for the segment.

The cabin doesn’t offer the most modern design in the segment. In fact, it is downright plain. The layered dashboard is soft to the touch on top, but has hard plastics on the bottom. The driver controls, though, are easy to access. Lots of storage areas including wide door pockets and a deep compartment between the front seats are helpful. 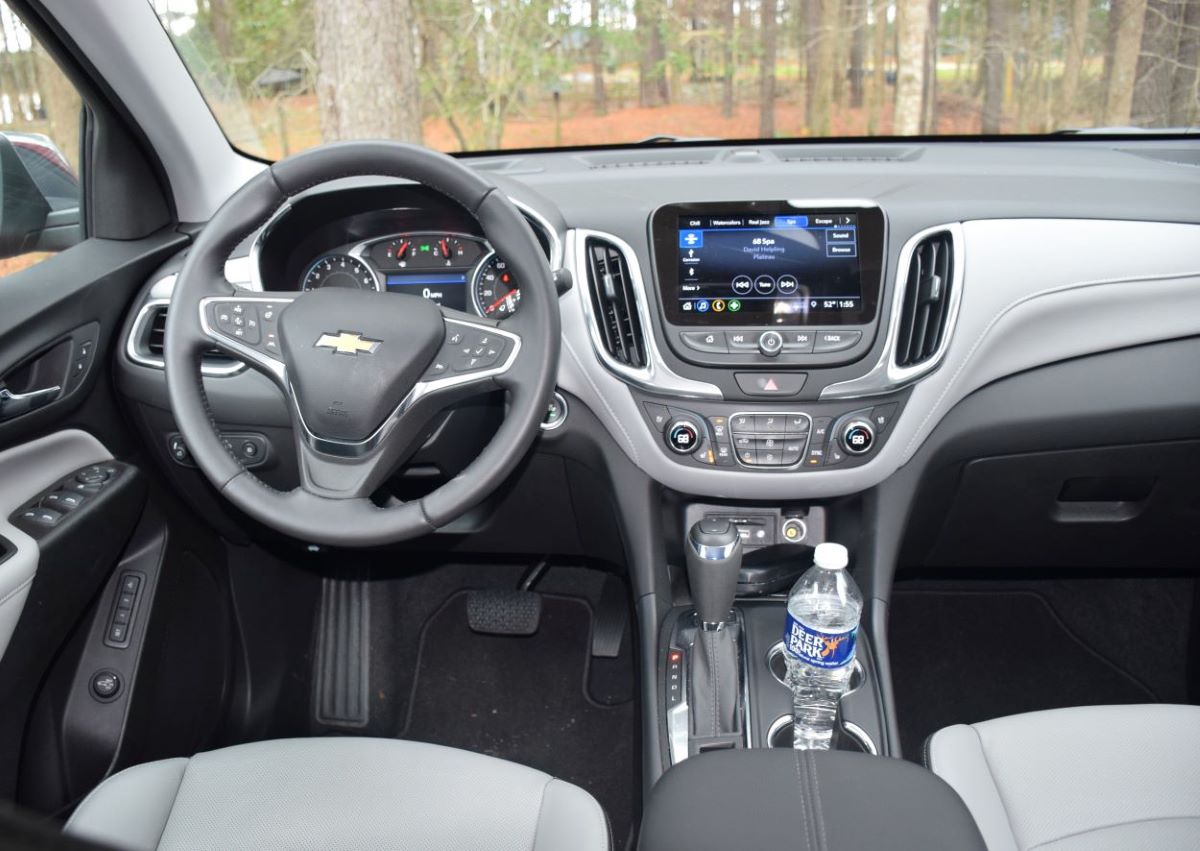 We’re pleased with Chevrolet’s tech offerings which include a standard 7-inch or available 8-inch touch-screen display, the latter bundled with the brand’s top-end infotainment system. That system is easy to use with its app-like buttons at the ready.

Among the upgrades are HD Radio, navigation, and a Bose 7-speaker audio system. A rear-seat entertainment system is another choice. 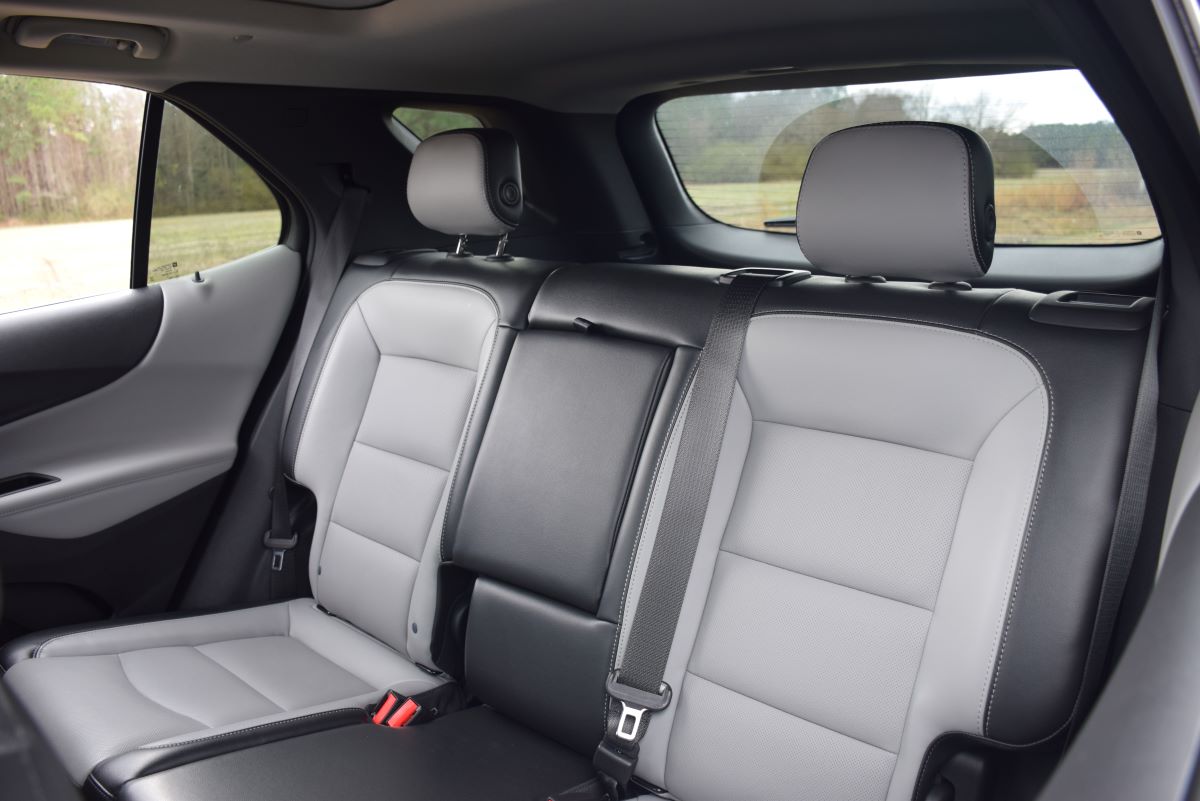 For 2020, Chevrolet improved the Equinox’s standard driver-assist offerings. Indeed, this year all trims come with the Driver Confidence Package included.

The Equinox Premier also offers a Driver Confidence II Package ($1,650), which adds a safety alert seat, surround vision camera, and adaptive cruise control among other features. Moreover, this model is a Top Safety Pick recipient from the IIHS and garnered a 5-star safety rating from the NHTSA.

Chevrolet offers two engine choices with the 2020 Equinox, down one since last year. Gone is the 1.6-liter turbo-diesel engine, which was the only one of its kind in the segment until the Mazda CX-5 followed with its own choice.

Most models come with a 1.5-liter turbocharged four-cylinder engine with 170 horsepower and 203 pound-feet of torque. Power is routed to the front or to all four wheels utilizing a 6-speed automatic transmission. This combination delivers the best fuel economy, coming in as high as 28 mpg combined city and highway driving.

The two top trims, LT and Premier, offer an optional 2.0-liter turbocharged four-cylinder engine. This one generates 252 horsepower and 260 pound-feet of torque with power routed to the wheels via a 9-speed automatic transmission. Previously, a 3.6-liter V6 was optional, but this engine does an admirable job of nearly matching its power, especially the torque. It also has a 3,500-pound tow rating when properly equipped. 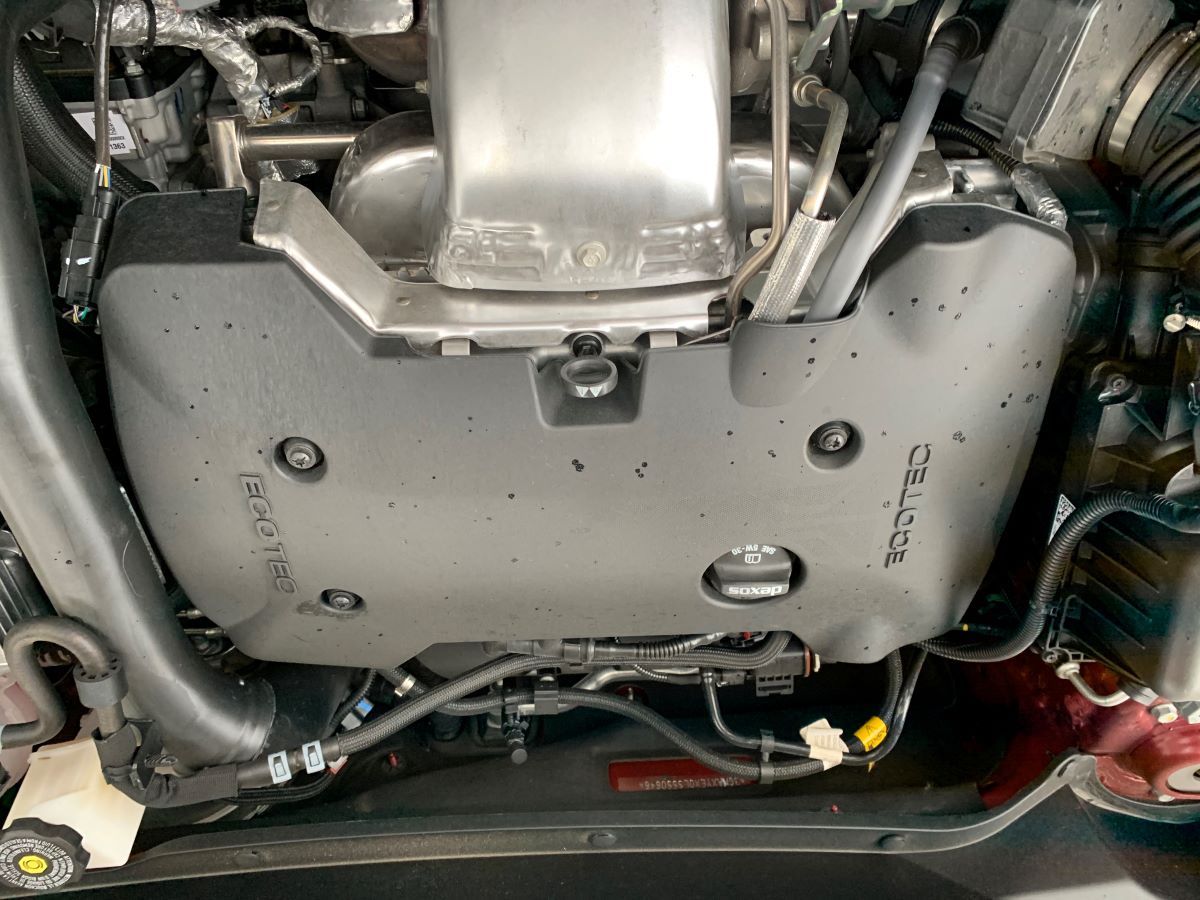 Our test Premier AWD model came with the larger engine. We found it offered robust step-off acceleration and excellent passing strength. The turbo spooled without much delay, contributing copious amounts of power as needed.

There are two things to keep in mind about the Equinox. First, this crossover comes with an automatic on/off system that shuts the engine down when idle. However, it doesn’t have an off switch, and that’s annoying. Fortunately, it is one of the least intrusive systems as it won’t shut down when your foot rests lightly on the brake.

Second, the all-wheel-drive system isn’t automatic. Instead, to activate it, a driver-controlled switch controls the same. This means if you forget to turn it on, all the power is sent to the front wheels. Expect much understeer when pulling out of corners. Otherwise, the system shuttles power to the rear wheels, as needed. Why did GM go with this type of system? Likely to conserve fuel. In any case, this model makes an EPA-estimated 24 mpg combined.

Steering is light to the touch and the Equinox’s handling isn’t especially engaging. Firm brakes and a decently comfortable ride are two additional attributes present. 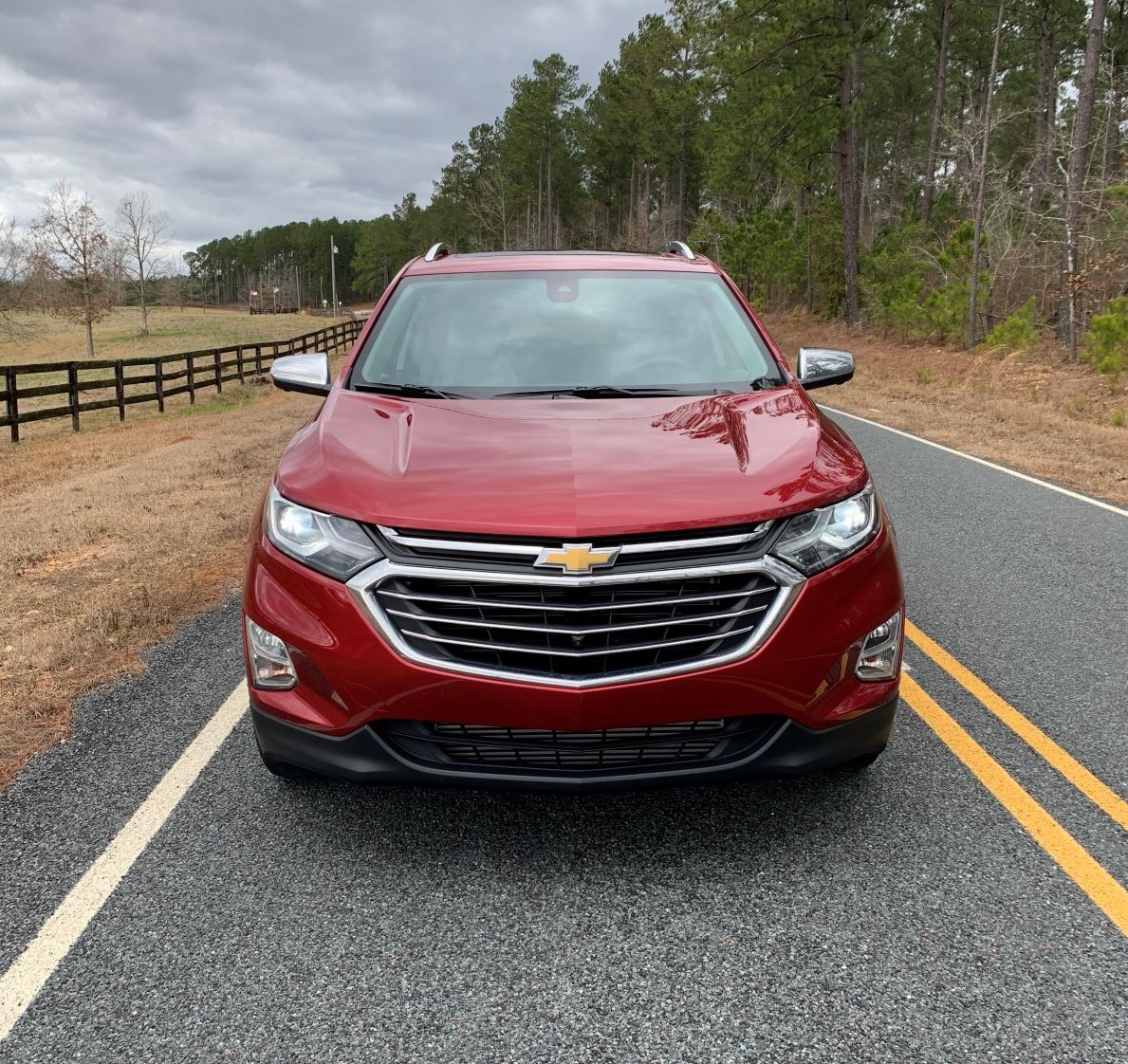 The Chevrolet Equinox occupies its place in a highly competitive segment. Every manufacturer has at least one entry in the game.

Check out all the Chevrolet vehicles on the brands’ website.

We rarely recommend a base model and that holds for the Equinox. Even the second-level LS doesn’t ring our bell, therefore we suggest starting your search at the LT level and for the following reasons.

That said, the standard engine with front-wheel drive remains a strong choice for some consumers. That is, if its average power is fine with you. In any case, the discounting Chevrolet regularly has in place can offset some of the added costs of upgrading, so keep this in mind when shopping for your Equinox.

All in all, the 2020 Chevy Equinox does what it must do to attract buyers. Its one of six utility vehicles offered by the bow-tie brand and will likely be joined by additional models, including a full-electric SUV, going forward. 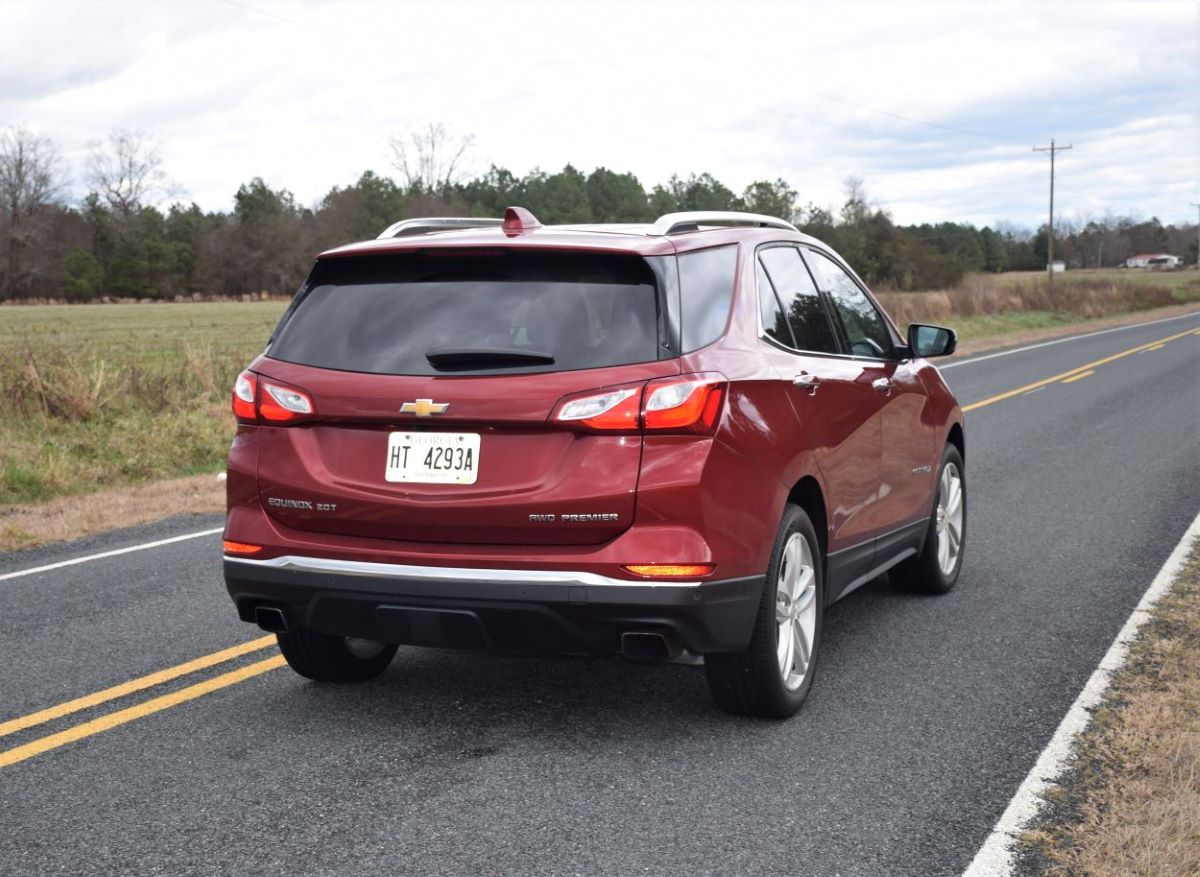