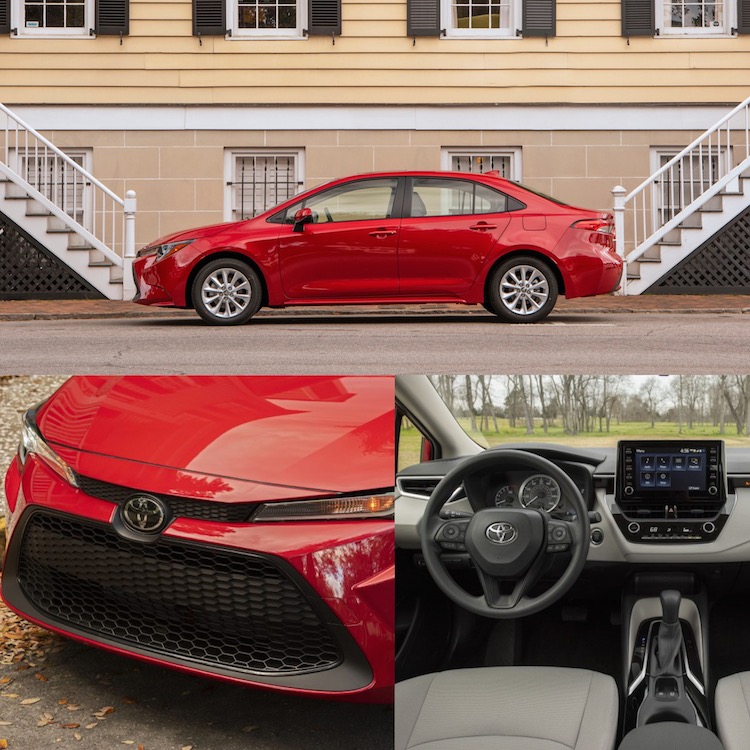 An all-new Corolla Sedan arrives for 2020.

The Toyota Corolla is one of the best-known and most popular models in the world, with more than a half-century of history its claim. In 2019, the twelfth-generation model rolled out, this time in hatchback form. For 2020, an all-new sedan debuts, giving the Corolla an important 1-2 punch in the compact sphere.

While Toyota can typically count on selling at least 300,000 Corollas annually in the U.S., it is China which now supplies the greatest demand. Indeed, Chinese sales are nearly double that of what Americans purchase, easily enabling Toyota to sell one million units annually worldwide.

The all-new Corolla is the sportiest and in some cases the most luxurious one yet. It comes loaded with standard driver-assist features and has an efficient powertrain to move this sedan. And for the first time, a hybrid variant rolls out, giving Toyota shoppers yet another alternative to the ground-breaking Prius.

We haven’t seen multiple Corolla models in some time, but now we’re up to three. Most consumers will opt for the sedan, while a not insignificant number will shop the hatchback. A hybrid is available for the first time too, although it comes only with the sedan. If you want a small hatchback with a hybrid drivetrain, turn to the Toyota Prius.

There is something that the Toyota Camry, C-HR, Avalon, RAV4, and Corolla have in common: a shared, modular platform. This all-new global platform may not mean much to customers, but it means a lot to Toyota as the company can build multiple and varying models from the same architecture. This process saves the company time, resources, and money, which means the company can continue to invest in vehicle lines, even as sales adjust — crossover sales are up, while car sales are down.

We haven’t seen ore than one engine choice with a Corolla since the 1990s, when 1.6- and 1.8-liter engines were offered. Once the smaller engine was dropped for the 1998 model year, the 1.8 soldiered on, although it has gained some improvements and efficiencies along the way. This year, a 2.0-liter four-cylinder engine joins the product line, covering the upper trim models, while the 1.8-liter engine is reserved for the base and middle trims. The performance difference is significant: 169 horsepower to 139 horsepower. We think customers will notice and like the difference.

4. A CVT joins the powertrain.

The Corolla’s automatic transmission is gone, replaced by a continuously variable automatic transmission. The change was made to gain a few extra mpg and will most likely not be noticed by drivers. Happily, a six-speed manual gearbox is also available, paired with the bigger engine and delivering rev-matching capability on SE trims.

Toyota has trailed the competition in all things connectivity but has now begun to move forward. For the first time, Apple CarPlay smartphone compatibility rolls out, although Android Auto still isn’t available. Amazon Alexa compatibility and Wi-Fi Connect are two additional features.

When it comes to your safety, Toyota bundles various features. And they’re standard too. Under the Toyota Safety Sense 2.0 umbrella, you’ll find such features as automatic high beams, lane tracing assist, road sign assist, lane departure alert with steering assist, a pre-collision system with pedestrian detection, and adaptive cruise control with full stop and go. These are features that’ll typically cost you more with some competing models. You’ll also pay much more to obtain them with certain luxury brands.

LED lighting is standard across the Corolla line and includes the headlights, daytime running lights, taillights, and the stoplights. Some trims include upgraded front lighting and an available adaptive front lighting system, which “sees” better while cornering.

A six-speaker audio system is standard and comes with a 7-inch touchscreen display, Siri Eyes Free, two USB ports, and Bluetooth. But there are better choices available too, which bring in an 8-inch screen, CD player, a robust app suite, and a 9-speaker JBL audio package.

Toyota prices the Corolla from just under $20,000 plus destination, which is a competitive price point considering all that is offered. With six grades available and highway fuel economy as high as 40 mpg, the 2020 Corolla upholds its position as a cost-effective, fuel-efficient, entry-level car.