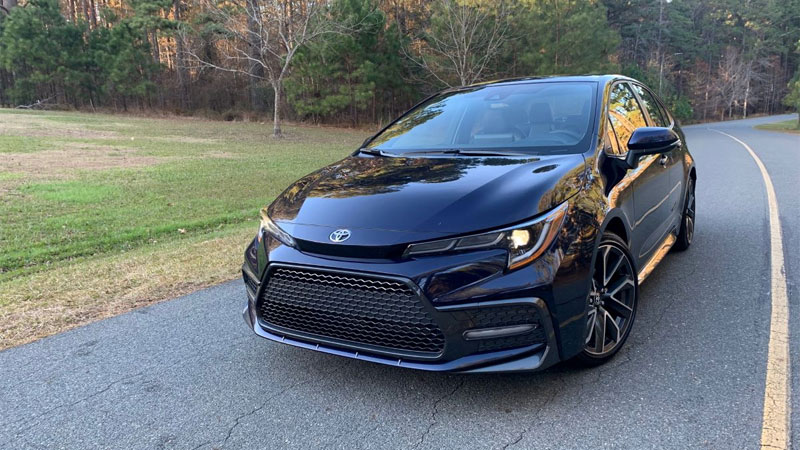 The Toyota Corolla is the world’s best-selling model of all time. Thus, it truly needs no introduction. That said, the current iteration of Toyota’s compact car has seen some changes in recent years, including its first-ever hybrid model.

Our review covers the gas-powered Corolla sedan. A Corolla hatchback is also available.

The Corolla seats five and comes with front-wheel drive. Customers have a choice of two engines paired with a continuously variable transmission. A 6-speed manual is available on select trims.

Now in its second year, the Corolla gains an Apex Edition, which layers over the SE and XSE trims. The Apex Edition comes with updated suspension changes, a body kit, and special 18-inch wheels.

Other changes include adding Android Auto smartphone compatibility and two airbags. Most trims now include blind-spot monitoring with rear-cross traffic alert or make it available within a package upgrade. 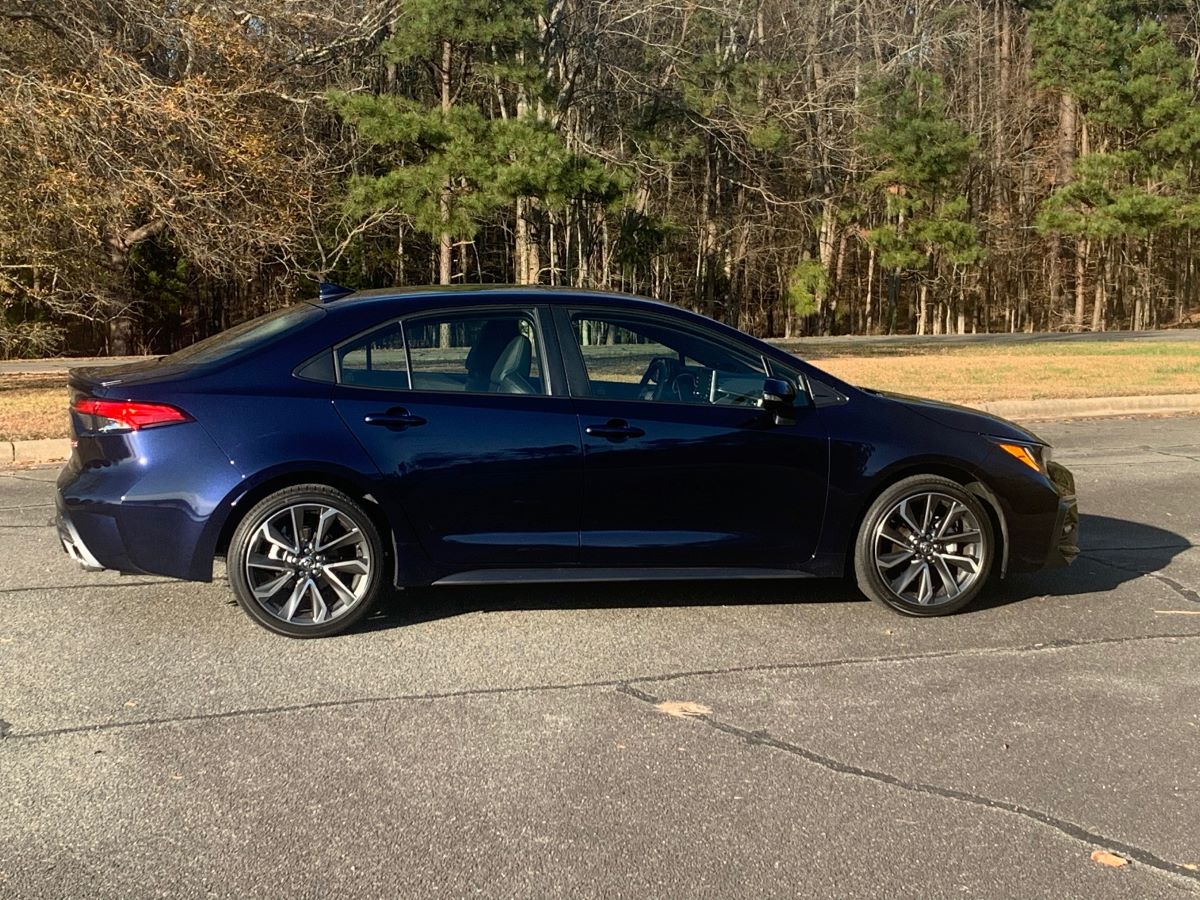 Not too long ago, the subcompact sedan market was dominated by a host of anonymous-looking models. At the time, customers didn’t seem to care much what their vehicles looked like – more important to them was the price, efficiency, and functionality.

But the times are a-changing and what customers accepted back then no longer applies today. These days, shoppers expect at least a modicum of styling inside and out. Happily, the Corolla goes beyond the basics to deliver a look that closely aligns with the larger and midsize Camry sedan, itself a former “anonymous” sedan.

The gaping grille on the Corolla makes for a bold statement as do the standard LED headlights, LED daytime running lights, and LED accent lights. This “cut above” look doesn’t end there with enough body sculpting and character lines present to lift the look considerably.

From the rear, the Corolla has standard LED tail and LED stop lights. A standard exhaust port gives way to twinned ports on some models, including with our XSE tester.

As for the wheels, only the base model comes with standard 15-inch steel covered wheels (16 inches on the LE). Most other trims have alloy wheels, measuring 16 inches on the XLE to 18 inches everywhere else.

The list of standard features includes power-controlled side mirrors, intermittent wipers, and the LED lighting array. Move up through the trim ranks and Toyota adds various color elements, including black-painted sport side rocker panels and a rear spoiler.

Color-keyed elements, including the grille, side mirrors, and door handles are evident. A power tilt-and-slide moonroof and an adaptive front lighting system are also available. 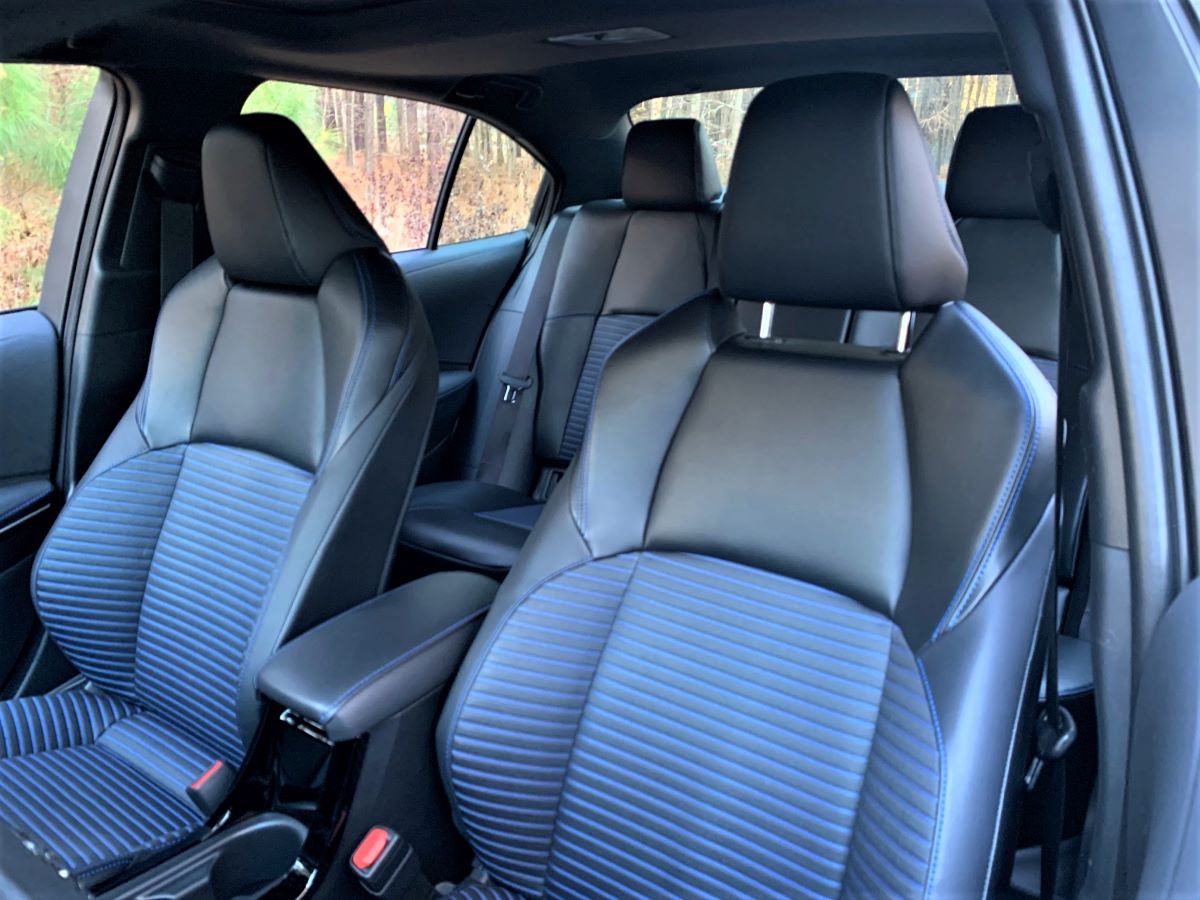 The EPA classifies the 2021 Corolla as a midsize sedan. The way the government measures interiors causes some models to ease into the next higher class. We still classify the Corolla as a compact model, but it is a roomy one at that.

With space for five, the Corolla is most useful for four. But that doesn’t mean a fifth individual cannot fit. It’s just a bit too cozy for adults, although three youngsters may find the space manageable.

Just watch your head when accessing or egressing the rear 60/40 split fold-down seat – you’re likely to bump it if you’re not careful. At least the legroom is tolerable for its class.

We credit Toyota with designing a cabin that’s straightforward and uncluttered. On some models, the dashboard is two-tone, while on others a singular color with contrast stitching is evident.

You’ll find the usual and expected amounts of plastics inside, but most are relegated to out-of-the-way places. In other uses, such as the brightwork trim, the look is pleasing. 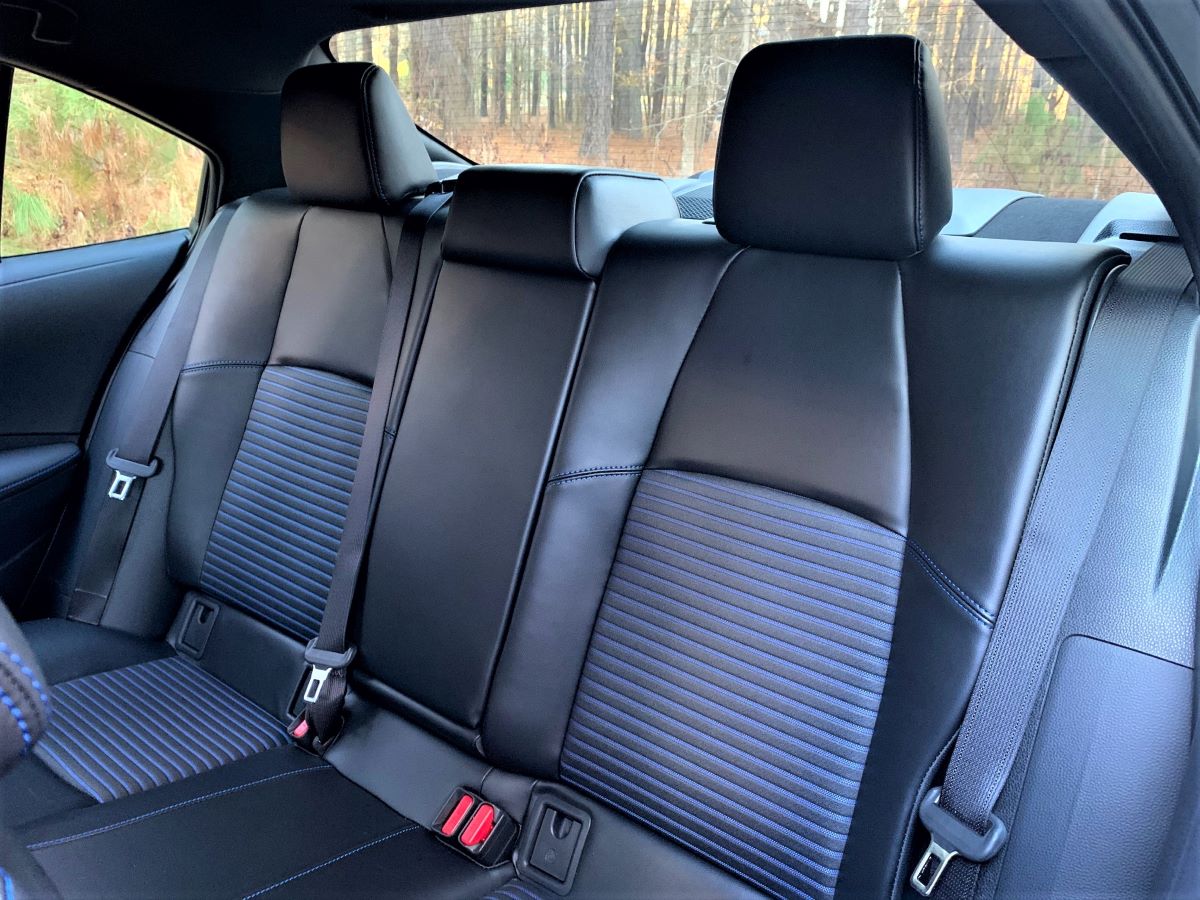 The list of standard features includes full power accessories, air conditioning, a tilt-and-telescopic steering column, and fabric-trimmed seats with manual control. Move up through the trim ranks and premium fabric or imitation leather seats can be found. In some cases, the driver seat is power controlled and heated.

Other upgrades include bronze interior trim stitching, keyless entry with push-button start, modified instrumentation, and a leather-trimmed steering wheel. We’re fans of push-button start although we do acknowledge some of our readers still prefer a key-flicked ignition experience. 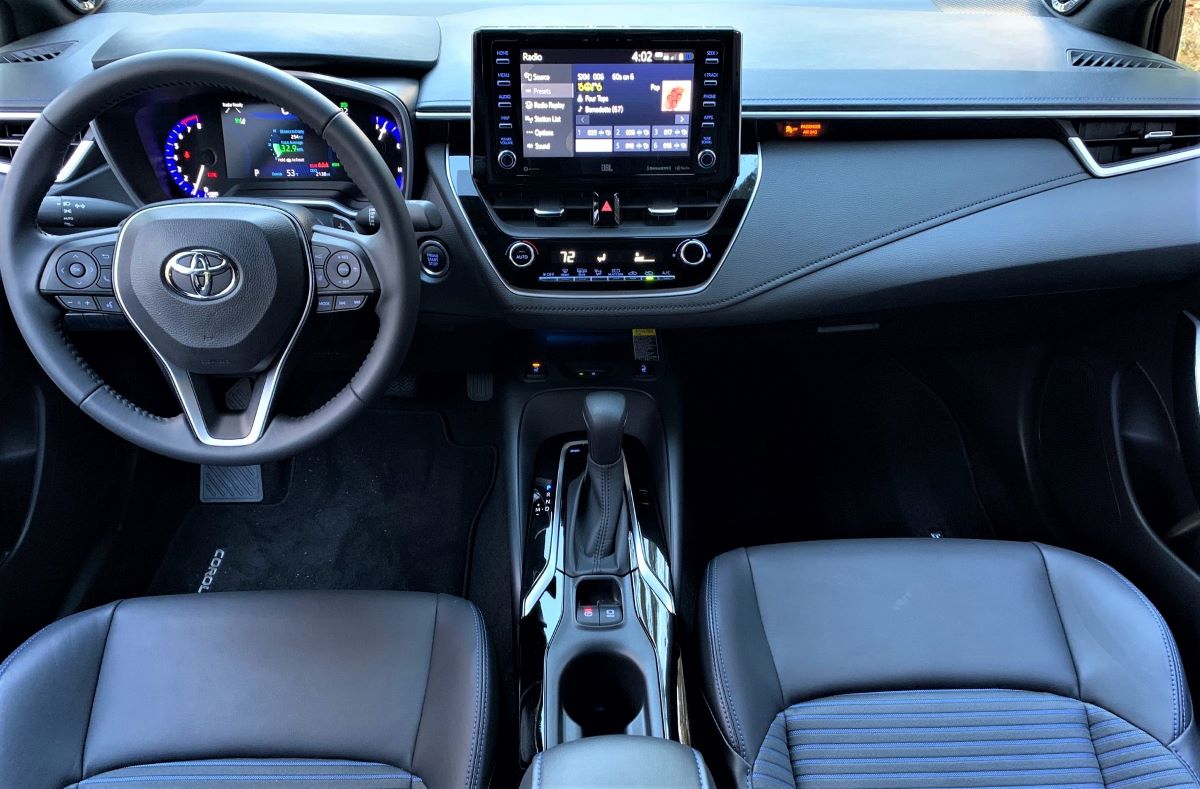 We like Toyota’s attention to detail, including in all things technology. Even the base “L” trim sees a decent collection of useful features, beginning with a 7-inch touchscreen display. That’s a nice departure from the tiny 5-inch screens that once dominated the segment.

Other standard features include six speakers; Alexa Auto, Android Auto, and Apple CarPlay compatibility; Bluetooth, Wi-Fi Connect, one USB media port, and one USB charge port. Toyota was behind the curve in smartphone compatibility, but it ironed things out with Apple to make CarPlay universally available and that’s a great thing!

Move away from the base model and the Corolla comes with an 8-inch touchscreen display and satellite radio. Depending on the trim or package available, other features available include additional USB ports, navigation, and a 9-speaker JBL audio system.

Our test model had the JBL system and we found the sound dispersion and quality quite good for this small sedan. As for navigation, we didn’t use it as CarPlay took us where we needed to go. The same can be said for most smartphone owners as the driving direction apps are quite useful…and free!

Another feature that’s available on some trims is Qi-compatible wireless smartphone charging. This is one of our favorites too as it allows for a smartphone to charge without a cord. Located at the base of the center stack, the pad is easily accessible and entirely useful. It “read” our Apple phone even with a case in place; your experience may be different from ours, however.

Toyota takes second place to no one regarding safety equipment. In fact, the Toyota brand typically offers more standard driver-assist features than a host of luxury brands. Thus, tremendous value is baked in when considering most any Toyota model, including the Corolla.

Moreover, Toyota models typically score high in federal and industry crash tests. To wit, the Corolla is an IIHS “Top Safety Pick” as well as a 5-star recipient from the NHTSA. Those scores are laudable and precisely where we’d expect this small sedan to land.

The last feature has become one of our favorites, although Apple CarPlay also lists the local speeds where available.

The only feature not available with the base model is blind-spot monitoring with rear cross-traffic alert. This one is standard on select trims or is available on certain other trims as part of a package upgrade. We find it useful, especially on the interstate where long trips beckon as well as on congested local highways. When you’re tired, it is simply easier to sideswipe someone.

In all, we found the Toyota safety package a useful enhancement for drivers. Our only fault, if you can call it that, is the system’s sensitivity when touching lines wherever the road curves or the side markers suddenly change.

In these situations, the system gives three quick beeps, which is a decent way to warn drivers, but a bit irritating at times when you know you’ve stayed in your lane. Or at least you think you did! 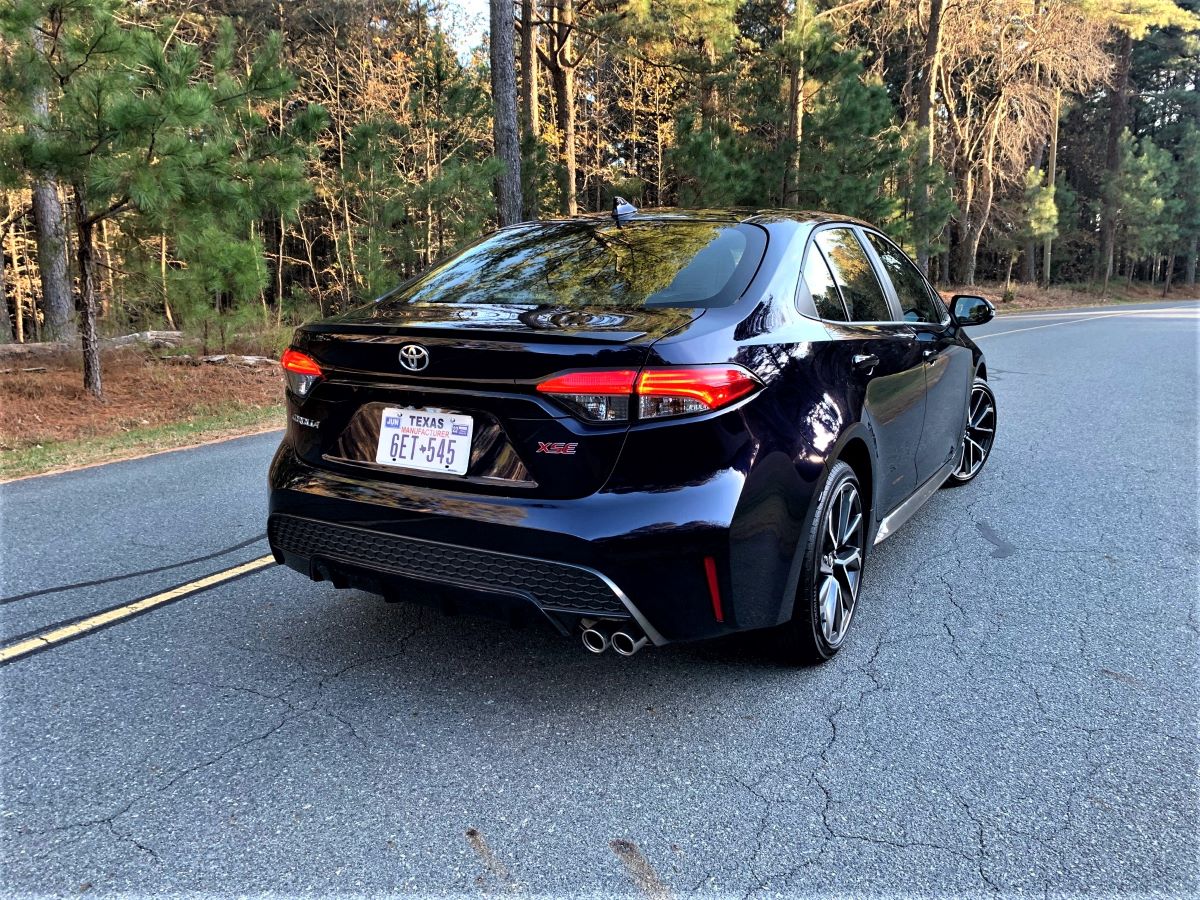 Toyota gives Corolla shoppers a choice of two four-cylinder engines. The standard 1.8-liter four-cylinder engine powers the L, LE, and XLE trims. This one makes 139 horsepower and 126 pound-feet of torque. We’ve driven Corollas with the base engine numerous times and it does what it needs to do and in an efficient manner.

Powering the other trims is a 2.0-liter four-cylinder engine. This one raises the performance quotient considerably, supplying an output of 169 horsepower and 151 pound-feet of torque. That’s a respectable amount for a naturally aspirated engine. Equally important, it supplies enough oomph to make a difference.

Our XSE edition with the upgraded engine features an independent MacPherson strut front suspension with a stabilizer bar and a multi-link system with a rear stabilizer bar. In fact, that’s the arrangement on all Corolla models, except on the Apex trims where increased stabilizer bar spring rates and coil spring rates prevail.

All models feature power-assisted ventilated disc brakes up front and solid disc brakes on the rear wheels. An automatic electric parking brake is standard and that’s a feature we like.

The Corolla doesn’t deliver excitement, at least not on the models we’ve driven. A sport mode on the XSE supplied a slight change in engine behavior, but with a CVT present, it wasn’t profound.

The Corolla’s electric-assisted steering is light to the touch. Its handling is about as engaging as you’d expect for this segment. In other words, the Corolla excels in all things efficiency, delivers a fair ride, and has firm brakes.

Other attributes include efficiency – it gets up to 40 mpg and that’s with the larger engine under the hood.

All told, we think this is a recipe for success. The Corolla strikes a strong balance in all the attributes expected of a small car. Further, its current design brings in welcome elements that stray far from the Corolla’s econobox routes.

The compact car segment may not have the sales cache it once did, thanks to crossovers consuming a significant chunk of the overall market. Even so, the manufacturers that are still in the mix act like demand is still strong and continue to overhaul and tweak these models — that’s good news for consumers looking for a bargain on a fresh model.

Gone from the market are such models as the Ford Focus, Dodge Dart, and the Chevrolet Cruze. The Mitsubishi Lancer is another model that has exited the segment. Thus, your only choice are the models supplied by a “foreign” manufacturer.

Besides the Corolla, other models to consider include the Honda Civic, Nissan Sentra, Mazda3, Volkswagen Jetta, Kia Forte, Hyundai Elantra, and the Subaru Impreza. Each model comes with front-wheel drive, except the Impreza which has standard all-wheel drive. The Impreza has an edge, which translates into a high-performance WTI model.

Start your search with any trim beyond the base “L” and you’ll find a nice long list of standard features. We know price-conscious shoppers want to keep their costs below $25,000 and that’s not difficult to do.

For $400 over the base model, the LE trim supplies keyless entry, automatic climate control, and an 8-inch touch-screen display. But if you want the larger engine, then start your search with the SE. Keep in mind that a 6-speed manual gearbox is standard; you’ll pay extra for the CVT.

Although not tested, the SE Apex Edition with its bronze and black side rocker panels and rear diffuser accent, 18-inch black flow-formed aluminum wheels, and lower sport-tuned suspension comes in around $26,000 before discounts. That’s just $800 more than our test XSE trim, which had 18-inch machine-alloy wheels, imitation leather seats, and heated front seats to show for it. Consider the Apex if a more drivable Corolla is your desire.